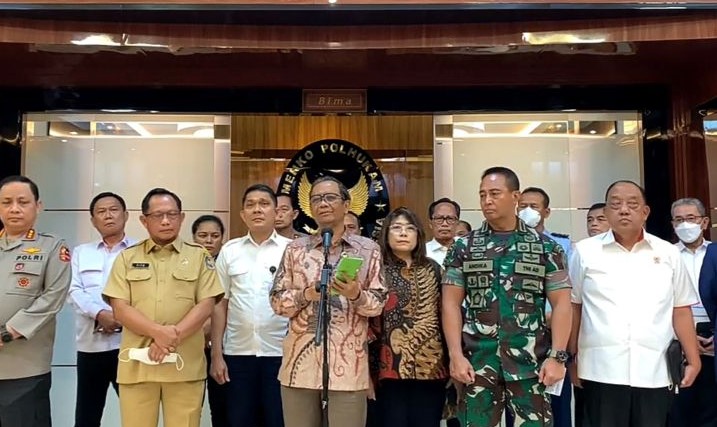 Coordinating Minister of Political, Legal, and Security Affairs Mahfud MD has stated that the government  establishes an independent joint fact-finding team to investigate the Kanjuruhan Stadium tragedy in Malang, East Java, on Saturday."To investigate the Kanjuruhan Stadium incident that occurred on October 1, 2022, the government has established an independent fact-finding team," Mahfud stated at a press conference at the coordinating ministry office here, Monday.The decision to form the fact-finding team was agreed upon at a coordination meeting involving various government ministers, police and military commanders, the Indonesian National Sports Committee (KONI), and the Football Association of Indonesia (PSSI) earlier on Monday, he noted.Mahfud said he would preside over the fact-finding team, and officials from relevant ministries and government institutions, professional football organizations, observers, academics, and mass media would take part as team members.He affirmed that the fact-finding team members would be announced in the next 24 hours to promptly commence the two- to three-week-long investigation into the tragedy.Pending the finalization of the fact-finding team, the government will take short-term measures to respond to the incident, such as by instructing the police to investigate individuals responsible for the crowd crush and reveal the names to the public, the coordinating minister noted."The police has been instructed to evaluate security arrangements in respective regions," Mahfud said.The government has also instructed TNI Commander General Andika Perkasa to take action against TNI officers allegedly involved in the incident, as depicted in viral videos circulating on social media."Circulating videos in social media depicted TNI officers committing excessive acts beyond their authority. To know whether the video is real or not, the TNI commander will investigate and report its results to all of us," the coordinating minister said. (Antaranews)