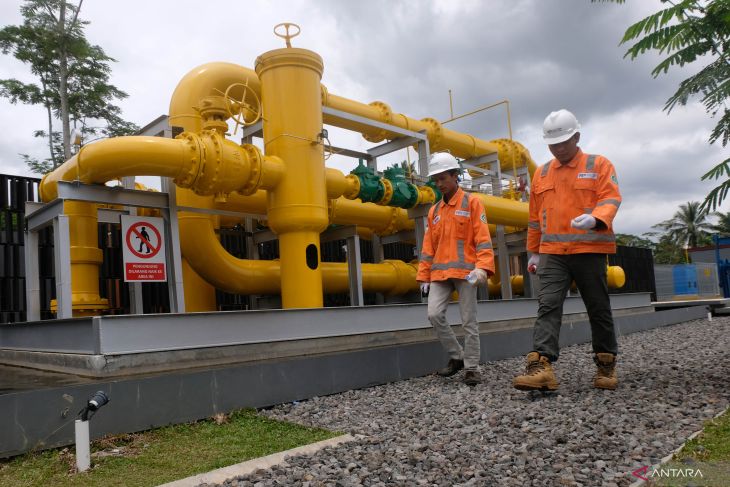 Natural gas is deemed crucial in future to bridge the transition from fossil-based energy to new and renewable energy, since currently, natural gas constitutes 19.3 percent of the primary energy mix and projected to increase.Through the National Energy General Plan (RUEN), the government projects natural gas to command a 24-percent share of Indonesia's primary energy mix by 2050, the second largest after new and renewable energy.Oil and gas observer from Trisakti University Pri Agung Rakhmanto stated here on Monday that the discovery of Indonesia's oil and gas reserves for the 2020-2021 period at Bronang-02, West Belut, Parang-02, Rembang-3B, and Wolai-02 chiefly constituted natural gas.The National Strategic Programs for the energy sector, such as the Abadi Masela Project and Indonesia Deepwater Development, had also been dominated by natural gas.During the 2012-2021 period, the share of gas utilization for domestic purposes increased by an average of 1.5 percent annually, he pointed out. In 2012, the share of domestic gas was still at 52 percent and increased to 65 percent in 2021."The industrial and fertilizer sectors are the main contributors to the increase in consumption of domestic natural gas, respectively accounting for 26.68 percent and 12.73 percent of the total national gas production," Rakhmanto noted.Energy and Mineral Resources Minister Arifin Tasrif had also noted that the use of gas would be the main alternative during the transition period. Moreover, in recent years, several gas reserves had been discovered that could be used for Indonesia to establish energy security.Optimization of natural gas use in the energy transition era will be discussed comprehensively during the 3rd International Convention on Indonesian Upstream Oil and Gas 2022 (IOG 2022) in Nusa Dua, Badung, Bali, on November 23-25, 2022.Some 120 national and international speakers will participate in the international event, hosted both in-person and virtually. It is targeted to reach 10 thousand participants online and 1,200 participants attending in person.Chairman of the IOG 2022 Organizing Committee Mohammad Kemal said the IOG event was the first hybrid event after being hosted online for the past two years. The 2022 IOG Convention was one of the important measures among several efforts to achieve the target of producing one million barrels of oil per day and 12 BSCFD of gas by 2030, he remarked.Three major concepts -- Economic Recovery, Energy Security, and Energy Transition -- will be brought up at the IOG 2022 event."This is linear with the government's programs and Indonesia's more sustainable targets," Kemal pointed out.He also expected that discussions on boosting national oil and gas production and the energy transition by several entities in the upstream oil and gas sector would be pursued further at the IOG 2022."Hopefully, in the remainder of 2022, the upstream oil and gas industry would have completed the things that need to be fixed and (seize) opportunities in 2023 to be able to work better," he stated.State officials scheduled to attend the IOG 2022 include Coordinating Minister for Maritime Affairs and Investment Luhut Binsar Pandjaitan, Coordinating Minister for Economic Affairs Airlangga Hartarto, Finance Minister Sri Mulyani, Environment and Forestry Minister Siti Nurbaya, and Energy and Mineral Resources Minister Arifin Tasrif. (Antaranews)