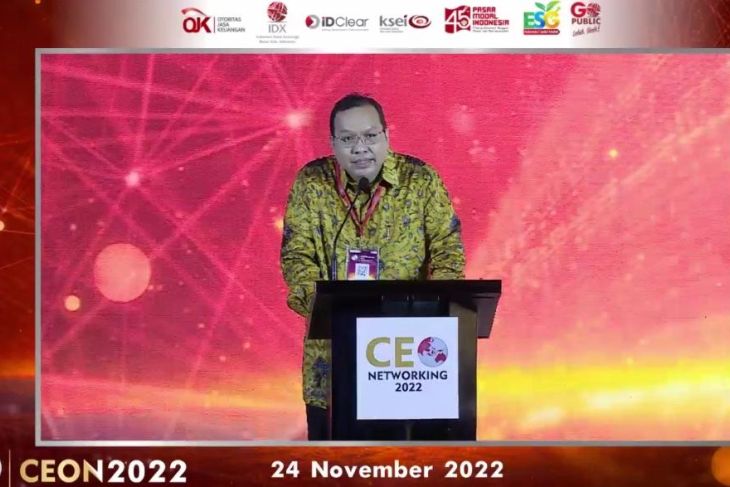 Policies prepared by the government and regulators in response to the COVID-19 pandemic and global economic challenges helped maintain positive sentiment in the domestic capital market, Indonesia Stock Exchange (IDX) Director Iman Rachman stated."Entering the third year of the pandemic and in the midst of the global challenges that we are facing throughout 2022, the policies that have been adopted by regulators, both the government and the coordination of the Financial Service Authority (OJK), Bank Indonesia (BI), and Indonesia Deposit Insurance (LPS) have succeeded in maintaining positive market sentiment," Rachman noted at the CEO Networking 2022 event here on Thursday.The IDX director said this was reflected in the growth of the Jakarta Composite Index (JCI) that until November 22 closed at the level of 7,030, or grew 6.82 percent since early this year.Market capitalization on the IDX is recorded at Rp6,400 trillion, or around US$ 630 billion.Meanwhile, the average daily transaction value on the stock exchange as of November 22 reached Rp14.9 trillion, or around US$ 1 billion, only lower than Thailand (US$2 billion) in the ASEAN.In terms of the number of investors, in the domestic capital market, it has reached over 10 million investors.However, he said, the number has only covered 1.5 percent of Indonesia's population of 270 million."In Singapore and Thailand, the number of investors as compared to the total population is at least five percent," Rachman stated.He elaborated that 70 percent of the investors are domestic, both from institutions and retailers, which was the opposite as compared to five years back when 70 percent of them were foreign investors.Of the 10 million domestic investors, 45 percent are retail investors."This is how you can imagine why other stock exchanges have negative growth year to date, but our stock market has recorded positive growth by almost seven percent," he added.Meanwhile, in terms of the number of issuers, 820 listed companies are currently on the IDX.In 2022, as many as 54 companies have listed on the stock exchange from the target of 55 issuers.The IDX estimates 58-60 issuers by the end of the year. Until now, 41 companies have been included in the pipeline to enter the stock exchange.The 820 issuers on the IDX were divided into three boards: the main board, development board, and acceleration board.The acceleration board, made for micro, small and medium enterprises (MSMEs), has 23 issuers.Meanwhile, there are 450 issuers, or 53 percent, in the development board and 350 issuers, or 43 percent, in the main board."At the end of the year or at the beginning of next year, we will add one more board, specifically the new economy board. (It is) because there are many tech companies or e-commerce companies that are actually eligible in the market cap to enter the main board, but due to their financial conditions, they cannot enter the main board yet. Hence, we separate them on the new economy board that is equal to the main board," Rachman stated. (Antaranews)