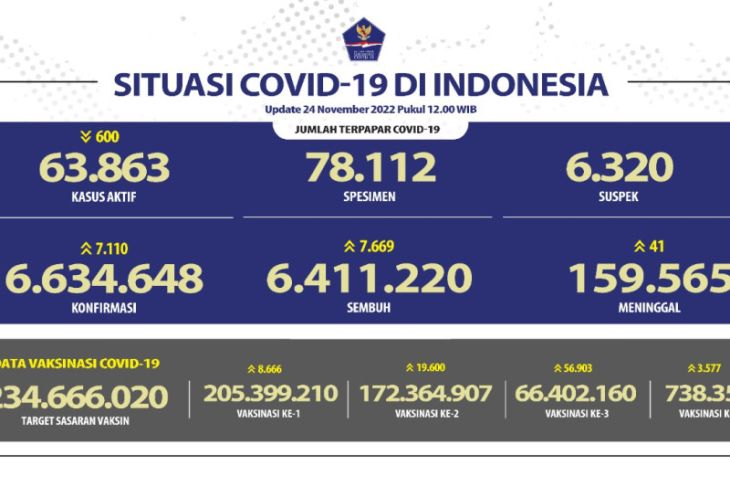 Indonesia logged 7,110 new COVID-19 cases on Thursday, with Jakarta contributing the highest number of daily infections, the COVID-19 Handling Task Force reported.The addition of 7,110 daily cases took the total number of cases reported in the country since March 2020 to 6,634,648.As per data from the task force, Jakarta reported 3,018 cases on Thursday, followed by West Java (1,454), Banten (732), East Java (623), and Central Java (412).The data also showed that Indonesia recorded 7,669 additional recoveries on Thursday, which took the cumulative number of recoveries to 6,411,220.Jakarta recorded the highest number of recoveries at 4,100, followed by Banten (908), West Java (856), East Java (586), and Central Java (279).Meanwhile, the number of COVID-19 patients who succumbed to the virus increased by 41 nationwide to reach 159,565.The additional deaths comprised 12 in East Java, 9 in Jakarta, and 3, respectively, in Central Java, Bali, Yogyakarta, and South Sumatra.However, the number of active cases fell by 600 compared to the day before, with a total of 63,863 patients currently receiving medical treatment and conducting self-isolation.The government has urged citizens to take the third or booster dose of the COVID-19 vaccine to increase their immunity against the virus.According to Health Ministry spokesperson Mohammad Syahril, Omicron’s XBB and BQ.1 sub-variants have begun to dominate COVID-19 cases in Indonesia."The new sub-variants, XBB and BQ.1, have 25 percent of the proportion of cases. Later, it can shift as the previous variant," he informed. (antaranews)