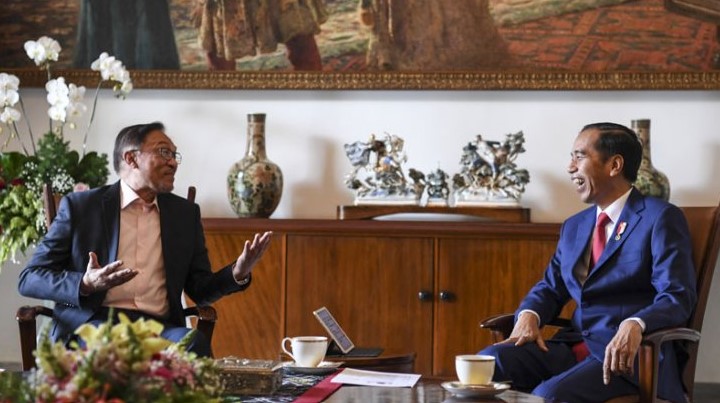 President Joko Widodo (Jokowi) congratulated the newly inaugurated Malaysian Prime Minister Anwar Ibrahim through a telephone call from the Bogor Palace, West Java, Thursday (November 24) evening."Representing the government and the Indonesian people, I wish to congratulate Your Excellency's inauguration as the 10th prime minister of Malaysia," the president told Anwar on the phone, as per the statement on Friday.According to the president, Anwar Ibrahim is a renowned figure in Indonesia and respected by the Indonesian people. He also believed that with Anwar at the helm, bilateral relations between Indonesia and Malaysia would be more prosperous."I hope we could meet soon to discuss ways to enhance our bilateral relations in the economic, border issues, and protection of our people," Jokowi said.Responding to Jokowi's statements, the Malaysian prime minister expressed his gratitude and welcomed Jokowi as the first leader, who called to congratulate him."Thank you. I take this as an honour (as you are) among the very first to call me. This proves that I will always be Indonesia's true friend," Anwar remarked.He also expressed hope that bilateral cooperation in the trade, investment, and cultural fields would be enhanced under his leadership."I hope that our relations in trade or business, investment, culture, and friendship, God Willing, could be enhanced," the prime minister said.Concluding the call, Jokowi expressed optimism that the Almighty God would always help and protect Anwar while performing his duty for Malaysia."All the Indonesian people pray (for you)," Jokowi remarked.On Thursday afternoon, Yang di-Pertuan Agong Sultan Abdullah of Pahang inaugurated Anwar Ibrahim as the new prime minister following consultation with the Conference of Rulers, comprising monarchies of Malaysian states, earlier that day.The Conference of Rulers was convened by Sultan Abdullah to break the political impasse due to the hung parliament produced by the 15th General Election last Saturday (November 19), with Anwar Ibrahim's Pakatan Harapan coalition's 82-seat victory insufficient to surpass the 112 seats required for a simple majority to govern alone.Meanwhile, Anwar's main contender for the prime ministership, Muhyiddin Yassin, successfully led his Perikatan Nasional alliance to win 73 seats. The former governing coalition Barisan Nasional, which incumbent PM Ismail Sabri Yaakob is part of it, only won 30 seats. (Antaranews)