Foreign Minister: Leadership, Solidarity in Facing the Challenges of Democracy 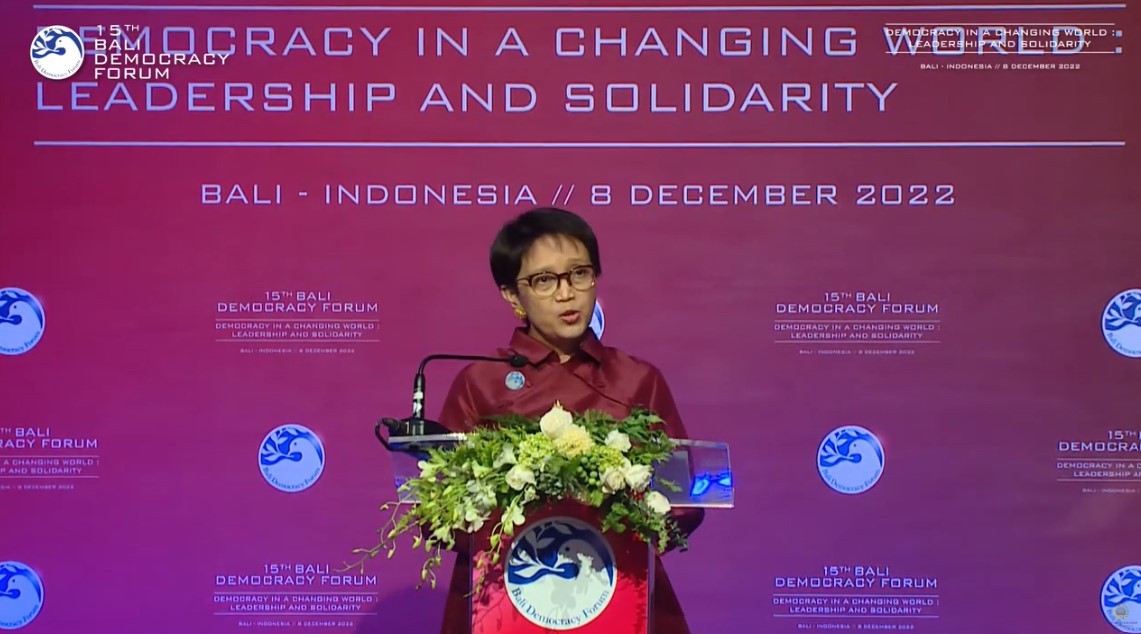 Minister of Foreign Affairs Retno Marsudi officially opened the 15th Bali Democracy Forum (BDF) in 2022. In a statement after the opening of the BDF, Retno said the theme taken at this time's BDF was "Democracy in a Changing World: Leadership and Solidarity." This is relevant to the current world situation which is facing extraordinary challenges.

"In order to face this challenge, strong and effective collective leadership and world solidarity are needed," he said after opening the BDF, Thursday (8/12) in Nusa Dua, Bali, which was monitored virtually from Jakarta.

Minister Retno conveyed that a number of institutions have reported that the quality of democracy is currently declining.

“International IDEA reports that democracy is in decline or stagnant. This stagnation or setback also occurs in even established democratic countries," he said.

In addition, Freedom House data shows a decline in democracy over the last 16 years. Meanwhile, the V-Dem Institute said the average quality of democracy had fallen to the level it was 30 years ago. And in Asia Pacific itself, it is estimated that 54% of the population lives under a democracy.

However, according to Retno, despite all the challenges that exist, there are still many people who believe democracy must continue to be developed, including Indonesia. He explained, with democracy, Indonesia has succeeded in managing the Covid-19 pandemic well.

"With democracy, we have managed to carry out or manage this pandemic well," he said.

Retno Marsudi also expressed optimism for democracy in facing the challenges of a world recession in 2023.

"The principle of solidarity is very important in promoting an inclusive recovery," he said.

Although democracy is not perfect, according to Retno, Indonesia's experience has shown that democracy works.

“Democracy pays off; democracy delivers and democracy is once again the best way to govern and serve the interests of the people," he said.

The 15th Bali Democracy Forum (BDF) was held in a hybrid manner. The 2022 BDF was attended by 323 participants from 112 countries and 5 international organizations, and 52 of them attended virtually. (VOI/Andy)