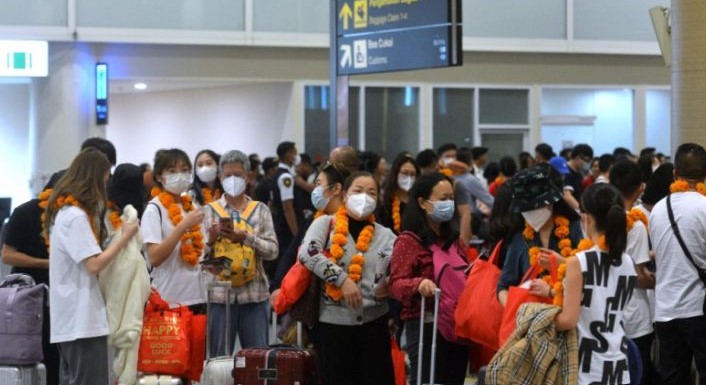 A total of 210 Chinese tourists getting on board a chartered plane arrived at I Gusti Ngurah Rai International Airport in the Indonesian resort island of Bali on Sunday.The Chinese nationals are allowed to travel abroad for the first time in almost three years following Beijing ease of restrictions of its COVID-19 measures.“This is officially first flight (from China). It is a good momentum to bring back the Chinese tourists to Bali,” Deputy for Marketing of the Ministry of Tourism and Creative Economy Ni Made Ayu Marthini said in Bali on Sunday.The 210 tourists who departed from Shengzhen, China, by getting on board Indonesia's Lion Air were greeted with a garland of flowers, traditional Balinese dances and the traditional lion dance or barongsai.Marthini hoped that after the first flight, there would be more Chinese tourists coming to Bali."The Indonesian Government has set a target of attracting 255.300 tourists from China coming to Indonesia this year. However, the targeted number of Chinese visitors can hopefully be exceeded, and if possible, it can be similar to that of 2019," she said.According to the information she received, the Government of People's Republic of China would also allow group tours to visit several countries, including Indonesia, starting from February 6.Bali Governor Wayan Koster said he believes that the returns of tourists from China will help Bali’s tourism get back to normal.“We hope our tourism will return to normal like before the pandemic. At that time.it drew 6.3 million foreign visitors a year. However, we hope, this year, it can reach at least 4.5 million visitors,” he remarked.Meanwhile, China's Consul General in Denpasar Zhu Xinglong said before the COVID-19 pandemic, there were around 1.3 million Chinese citizens traveling to Bali in 2019.After this first flight, there would be a number of direct flights from China arriving in Bali in the very near future.“We will also encourage other cities in China such as Beijing and Shanghai to make more direct flights to Bali. In February, there will be more flights from China coming to Bali,” Xinglong said. (antaranews)