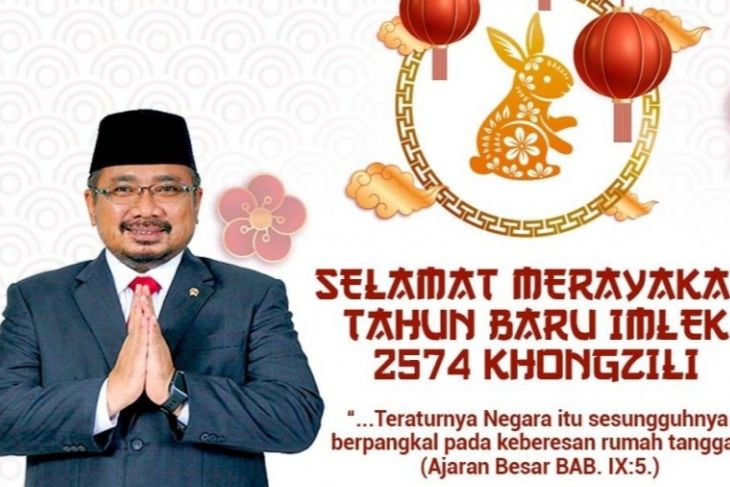 Indonesia's Religious Affairs Minister Yaqut Cholil Qoumas opined that the Chinese New Year needs to be a momentum for self-introspection to evaluate the past, and improve oneself."Let us use the Chinese New Year as a momentum to introspect ourselves, correct our past journey, and plan the upcoming year," Qoumas stated, as per the statement here, Sunday.The minister pointed out that Confucius had said that if people could renew themselves, then they should ensure that their renewal was continuous.He also expressed hope that harmony could be realised to achieve an outstanding Indonesia."Happy Chinese New Year 2574 Kongzili. Gong he xin xi (Happy New Year), Wanshi ru yi (may everything go as wished), to all who practice the Confucian faith in Indonesia and everyone who celebrates it," Qoumas remarked.He also conveyed the Chinese New Year greetings through the ministry's official Instagram @kemenag_ri.While conveying the greetings in the Instagram post, he quoted a section from a Confucian classic, the Great Learning, which reads, "to govern well their states, one must first harmonise their own family."Meanwhile, President Joko Widodo conveyed his greetings through his official Twitter @jokowi and expressed hope that tomorrow will be better for all."Time changes, the year passes, and new challenges appear, but one that must remain is the hope that tomorrow will be happier, more prosperous, and more advanced. Gong xi fa cai (May you have a prosperous new year)," as tweeted through his official account.Moreover, several state officials also conveyed their Chinese New Year greetings, including the Minister of Villages, Development of Disadvantaged Regions, and Transmigration Abdul Halim Iskandar, through his official Instagram."Happy Chinese New Year, may we are blessed and successful," Iskandar said.Minister of Manpower Ida Fauziyah also conveyed her greetings. "Happy Chinese New Year, Gong xi fa cai, may prosperity and happiness be abundant for all of us this year," she remarked. (antaranews)