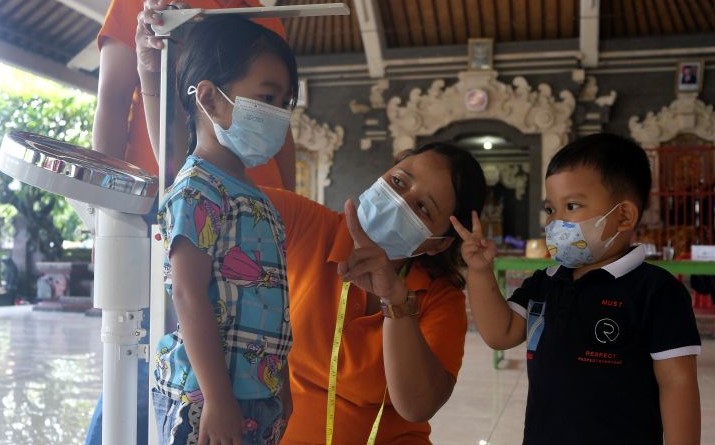 The Bali provincial government succeeded in reducing the region's stunting cases to reach the lowest level in Indonesia for 2022.It targets the number of stunting cases to remain the lowest in the following years, an official of Bali's Health Office said."Stunting prevalence in Bali in 2022 was at around eight percent. The calculation has been made in October-November, and the rough result was nearly 8.9 percent. The last calculation we received from the Health Ministry was eight percent," Head of the Bali Provincial Health Service, I Nyoman Gede Anom, stated in Denpasar, Monday.Anom remarked that the number of stunting cases in children under five in Bali Province in 2022 was lower than the target set by the provincial government.The regional government is targeting to reduce the number of stunting cases, from 10.9 percent in 2021 to 9.28 percent in 2022."The target was 9.28. However, it was better to reach the lower percentage. What is certain is that Bali is the lowest in Indonesia, and it is clear that our target will still be the lowest," he affirmed.Anom remarked that in 2021, several areas in Bali, such as the districts of Karangasem and Klungkung, had recorded a high number of stunting cases.However, Klungkung District had succeeded in reducing its stunting prevalence rate."The lowest (case numbers) are in Denpasar, Badung, and Klungkung. Due to the success in achieving stunting (reduction) in Bali, awards have been given to the three regions," he remarked.Anom said that the success achieved in reducing stunting in Klungkung District could not be separated from the support of regional leaders, village and traditional village heads, as well as mothers, who are members of the Family Welfare Empowerment organization (PKK).He stated that the provincial government is striving to reduce the number of stunting cases to 7.1 percent by the end of 2023.The regional government has also mobilized all regional apparatus organizations to implement programs to accelerate stunting reduction and chronic malnutrition in children's growth."In 2023, we will intensify the efforts," Anom affirmed.Efforts to tackle stunting made by the local government include meeting the nutritional needs of mothers and babies, giving blood-added tablets to mothers and teenage girls, family assistance, monitoring children's growth and development through activities at the integrated health post (posyandu), and counseling on stunting prevention. (antaranews)