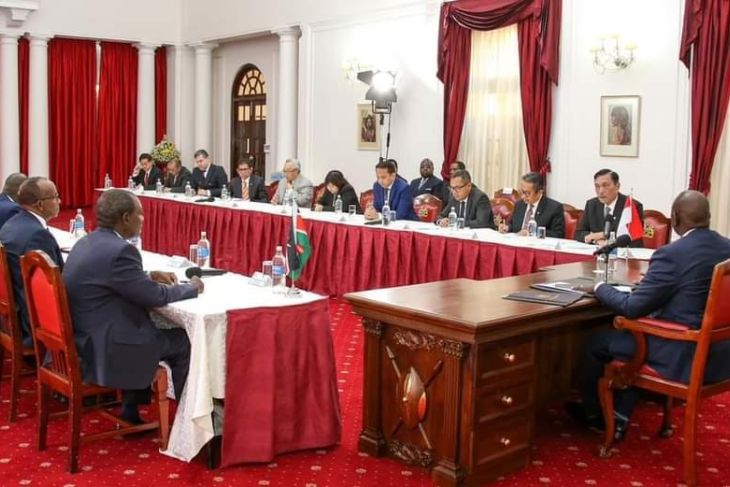 Indonesia and Kenya will soon form a joint task force to strengthen bilateral relations and cooperation between the two countries, an Indonesian top minister said on Monday. Coordinating Minister for Maritime Affairs and Investment Luhut Binsar Pandjaitan in his personal Instagram account said the joint task force will discuss cooperation on three main areas: trade and investment, mining, and strategic defense.He was in Kenya after attending the World Economic Forum (WEF) Annual Meeting 2023 in Davos, Switzerland.During his visit to the East African country, Pandjaitan conveyed President Joko Widodo’s congratulations to William Ruto, who has been elected as the President of the Republic of Kenya, and discussed several commitments and agreements.He emphasized that those commitments and agreements were made to strengthen bilateral relations and cooperation to benefit the two countries."I also explained that Indonesia's current vast wealth of natural resources has been allocated effectively to push sustainable development in various sectors," he said.Among the sectors are renewable energy, mining, electric vehicle ecosystem, pharmaceuticals, defense and strategy, and digitizing public services and port operations."We conveyed that Indonesia is ready to share its experiences and best practices with Kenya in all of those sectors," the minister added.He expressed the hope that his working visit to Kenya would strengthen relations between the two nations, especially since Kenya is one of the countries in East Africa that has had good relations with Indonesia since 1955.The relations between the two countries were strengthened by the opening of the Indonesian Embassy in Nairobi in 1982 and the Kenyan Embassy in Jakarta in 2022."Hopefully, with this visit, the relations between Indonesia and Kenya can become stronger," he remarked. (antaranews)