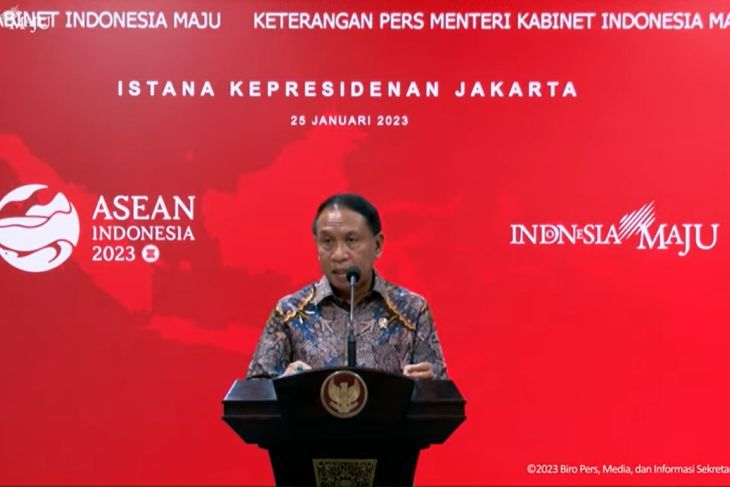 Indonesia is ready to host international sports events starting from the U20 World Cup, ANOC World Beach Game, and FIBA World Cup, to the 2024 National Sports Week (PON), Youth and Sports Minister Zainudin Amali said."Regarding the implementation of the FIFA (International Federation of Association Football) U20 World Cup, we have reported that everything is ready, followed by preparations for the 2023 FIBA World Cup, ANOC World Beach Game, and PON in Aceh and North Sumatra in 2024," Amali informed.He conveyed the information at a press conference after attending a limited cabinet meeting with President Joko Widodo in Jakarta on Wednesday.He said that all related parties involved have carried out their respective duties properly.Only a few technical details for the opening and closing ceremonies need to be ironed out in the preparations for the U20 World Cup, he added."Overall it is ready, there are only a few things that need our attention," he said.Earlier, the FIFA U20 World Cup did not have opening or closing ceremonies. However, FIFA has agreed to conduct the ceremonies for the latest edition of the competition."It is still waiting for approval from the president," he said.Further, the Ministry of Public Works and Public Housing (PUPR) has carried out renovations at the venues for the competition, namely Gelora Bung Karno (GBK) Stadium in Jakarta, Si Jalak Harupat Stadium in Bandung, Manahan Stadium in Solo, Gelora Bung Tomo Stadium in Surabaya, Jakabaring Stadium in Palembang, and Captain I Wayan Dipta Stadium in Bali.Regarding the preparations for the 2023 FIBA Basketball World Cup, the ministry is finalizing the construction work for the GBK Indoor Multifunction Stadium, which will be used for basketball matches.The construction of the football stadium and sports arena carried out by the ministry will be in accordance with the standards and requirements of FIFA and the International Basketball Federation (FIBA).Meanwhile, the logo and mascot for the 2024 PON will be launched in Aceh on January 28, 2023, and in North Sumatra on January 29.At the same press conference, chairperson of the Indonesian Olympic Committee, Raja Sapta Oktohari, informed that the 2023 ANOC World Beach Game will be held from August 5–12, and will be followed by the ANOC General Assembly on August 13–15.The international sports event will be joined by 130 countries and the ANOC General Assembly will be attended by participants from 205 countries, he added."This coincides with the 78th anniversary of Indonesia's independence. We have conveyed this to the President and he showed his enthusiasm. He even believed that someday we can host the Summer Olympics," Oktohari said. (Antaranews)