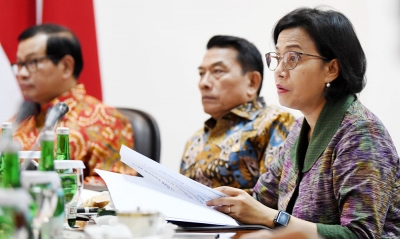 “We have to make sure that growth can be spurred from investment, the fundamental factor for Indonesia to be able to maintain its growth momentum of above 5 percent without incurring vulnerabilities amid a very volatile global environment,” she said in Presidential Palace Complex in Jakarta on Tuesday.

Investments, the second highest contributor to gross domestic product (GDP) after household spending, grew sluggishly at 5.01 percent in the second quarter of this year, lower than the 5.85 percent expansion booked over the same period last year, according to Statistics Indonesia (BPS) data.

The indicator contributed to the slowdown of GDP expansion in Indonesia, which was recorded at 5.05 percent in the second quarter of this year, lower than the 5.27 percent growth recorded over the same period last year.

“The transmission of the global risks, whether we like it or not, will reach us. It could be in the form of certain effects to the rupiah’s exchange rate, to our stock market, or to the yields of our bonds and SBSN [State Sharia Sovereign Bonds],” said Sri Mulyani.

The former World Bank managing director said among the risks that were being carefully watched by the government were the United States Federal Reserve’s monetary policy stance and the ongoing trade spat between China and the US, as well as other risks haunting other emerging markets such as Argentina, Brazil and Mexico.

She added that the government was formulating policy responses to counter those negative effects and maintain positive momentum for the domestic economy, but she refused to elaborate on the plan.