Moon Jae-in sure of Indonesia's dynamic growth under Jokowi's ruling 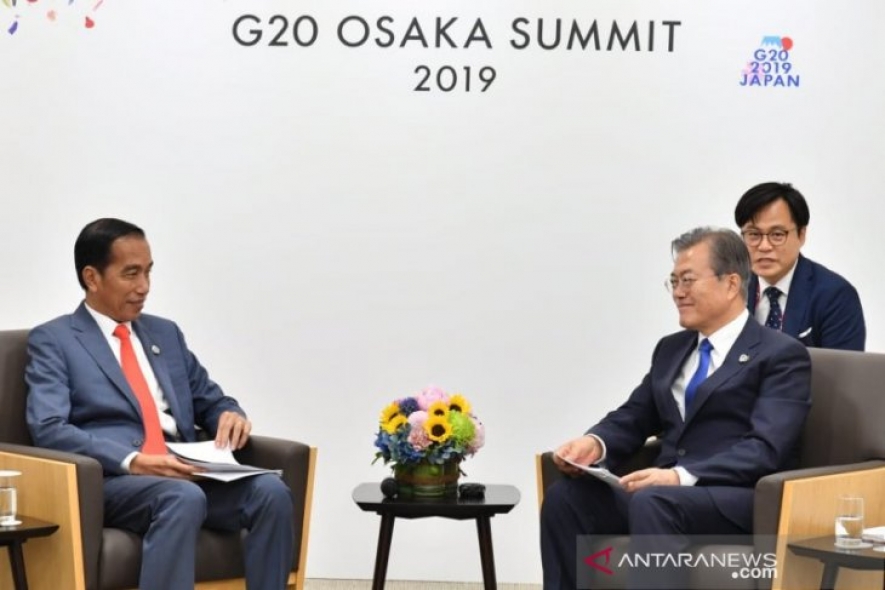 President Joko Widodo and South Korean President, Moon Jae-in, held a meeting in the sideline of the G20 Summit in Osaka, Japan, on Friday, 28 June 2019 ANTARA

President of South Korea Moon Jae-in is assured of Indonesia's dynamic growth under the leadership of President Joko Widodo, who is inaugurated for his second term in office in Jakarta on Sunday.

President Moon congratulated Jokowi in his official Twitter and Facebook account on Sunday. "Under Jokowi's leadership which involves all elements of the public, Indonesia will enjoy even more dynamic growth," he said.

In his message, Moon said that the friendship and mutual trust shown by Jokowi have pushed both Indonesia and South Korea to materialize the Special Strategic Partnership. Indonesia is the only country in South East Asia that has established such relationship with South Korea.

"I hope Indonesia and Korea will continue the effort to materialize welfare for both countries, by combining the visions 'Indonesia Maju' (Advanced Indonesia) and New Southern Policy, as we have carried out thus far," he said.

Although he could not attend President Jokowi and Vice President Ma'ruf Amin's swearing-in ceremony by himself, Moon sent his Chief of the Presidential Staff Noh Young-min to Jakarta to attend the event that will be held at the parliament building on Sunday.

In Jokowi's second term in office, he hoped that the people-to-people exchange between the two countries could be intensified.

"I am looking forward to meeting President Joko Widodo to once again congratulate him," he said. (ANTARA)