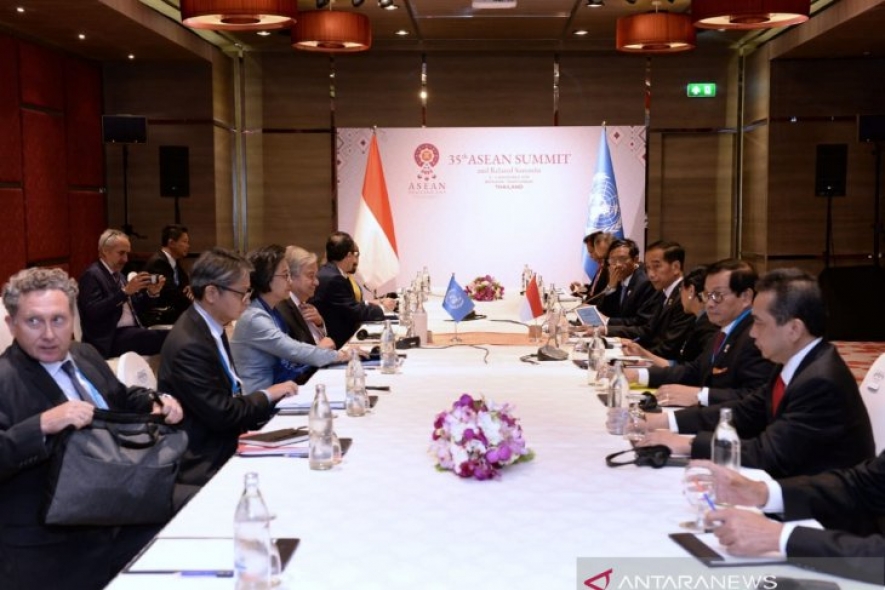 United Nations Secretary General António Guterres has specifically praised Indonesia for its role in bridging peace efforts while it assumes the non-permanent membership of the United Nations Security Council (UNSC).

Guterres expressed the appreciation during a meeting with Indonesian President Joko Widodo (Jokowi) at Impact Exhibition and Convention Center, Bangkok, Thailand, on the sidelines of the 35th Association of Southeast Asian Nations (ASEAN) Summit on Sunday, Chief of the Press, Media and Information Bureau of the Presidential Secretariat Erlin Suastini said in a press statement released on Sunday.

"At the meeting with the UN, the UN secretary general specifically praised Indonesia for its role as a bridge builder particularly while it assumes the non-permanent membership of the UN Security Council," Foreign Minister Retno Marsudi who also accompanied the president at the meeting said.

In its 52 years of existence, ASEAN has been able to create and maintain peace and stability in the region.

Apart from that, ASEAN also records economic growth which is above global average. Hence, to showcase the role and benefit of ASEAN and its contribution to the global community, strong synergy between regional organizations such as ASEAN and the UN is considered necessary to be enhanced.

"The president stressed that strong synergy between regional organizations such as ASEAN and the UN is very important, meaning that if the regions are strong they will contribute to global peace," the minister said.

To that end, the president expressed Indonesia's commitment to make the issue of encouraging synergy between the regional organizations and the UN a priority issue while Indonesia assumes the non-permanent membership of the UNSC.

"The president said while Indonesia sits in the UNSC, the synergy between regions and the UN becomes one of its main priorities," the minister said. (ANTARA)