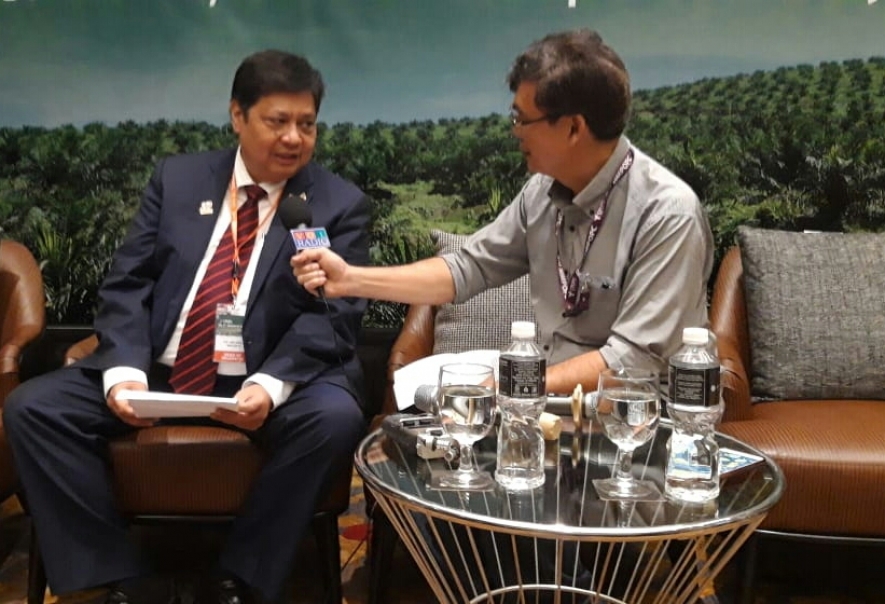 Indonesian Coordinating Minister for the Economy Airlangga Hartarto in an exclusive interview with Voice of Indonesia's reporter Daulat Pane at the 2nd Meeting of the Ministerial Level of Palm Oil Producing Countries in Kuala Lumpur, Malaysia Monday (Nov 18, 2019) VOI-DAULAT PANE

The Second Ministerial Meeting of Palm Oil Producing Countries which took place in Kuala Lumpur, Malaysia on Monday (Nov18) recommended several measures to be followed up. One of them is to continue to promote and expand biofuel consumption, in order to absorb more Crude Palm Oil (CPO) in the global market, including through Indonesia's efforts to implement the B30 program in December. Representative from Indonesia, Coordinating Minister for Economy Airlangga Hartarto said that the participating countries agreed to boost cooperation in developing strategies to increase the price of palm oil. He also said that Indonesia's policy in carrying out the bio-20 fuel program (B20) had succeeded in driving up world palm oil prices.

“Some of the results of the meeting are: firstly oil palm producing countries increased their cooperation to develop strategies to improve better prices. Professor James Fry and Paganini recognized that there has been increase in prices later this year due to Indonesia's policy of implementing B20 and will increase it to B30. Currently the price of palm oil is already above 600, so this step is really appreciated by other countries,” said Airlangga Hartarto.

Minister Airlangga Hartarto added that during the meeting Malaysia also conveyed its commitment to implement B20 in 2020. Meanwhile Thialndhas its commitment to increase B7 program to be B10. The policy is expected to be followed by other palm oil producing countries. It is also hoped the countries can accelerate the use of B30 bio fuel. Minister Airlangga Hartarto added that Palm Oil Producing member countries (CPOPC) will shortly oriented to Indonesia in applying B20 even B30 program// Lip.DP/Trs.AF