Nadiem Makarim keen to give university students freedom to learn 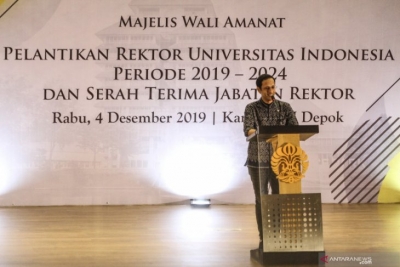 Education and Culture Minister Nadiem Makarim spoke of his keen intent to give university students the freedom to learn in line with their aspirations, capabilities, and interests."University students should study in accordance with their respective wishes and interests. We must make this change," the minister noted in his remarks at the inauguration of the new rector of the University of Indonesia (UI) Prof. Ari Kuncoro at UI Campus, Depok, here, Wednesday.The minister stressed on the need for university students to also have the freedom to conduct various activities beyond the realm of education programs.A university capable of providing education to students plays a crucial role in realizing President Joko Widodo’s vision to produce sound human resources, he remarked."The president's vision has two interpretations, specifically freedom in learning and teachers as activators," he stated.Streamlining regulations and bureaucracy are deemed necessary for freedom in study, from the lowest educational level until university, Makarim remarked."Within the next five years, indeed, it would not be convenient at all for various education institutions. However, the change must be brought about," he stated.Speaking in connection with teachers and lecturers as the stimuli, Makarim said they would strive to seek knowledge and science to bring about improvements in learning activities in classes."He would not waste time in class. Hence, in class, he would organize a discussion or group study and implement various projects outside though by involving his students to enable them to have different experiences," he stated.Teachers and lecturers should feel a sense of pride if their students are smarter than them, and they would not feel threatened, he remarked.In the meantime, on Nov 19, while speaking at the commemoration of the 107th anniversary of Muhammadiyah, Indonesia's second-largest Muslim organization, Makarim voiced his commitment to freeing the country's education system to drive novel innovations in the education sector."In accordance with the president's directives, our mission in the Education and Culture Ministry is to free the education unit, to free teachers, and to free students. This is my commitment," he remarked.Freedom is paramount to materializing innovations in every education unit.To prepare future national leaders, the former boss of Gojek Internet technology-based company vowed to further promote character building education.However, character building education cannot merely be taught but must be applied on an ongoing basis."Character education cannot be taught. The best character education is to give example and to lead by it," he noted.