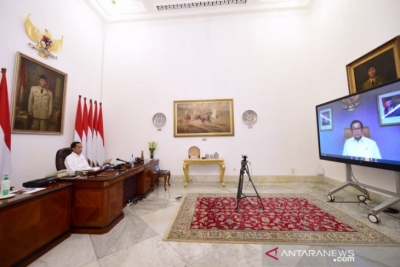 The Indonesian government, on Friday, expressed its readiness to face the economic slowdown owing to ongoing concerns over the global pandemic of the new coronavirus disease (COVID-19). "The global economy is projected to decline, from three percent to 1.5 percent or lower than that," President Joko Widodo (Jokowi) told his cabinet members during a teleconference meeting to discuss monetary and fiscal policies in response to the COVID-19 outbreak in Jakarta. President Jokowi echoed the government’s readiness to face the global economic slowdown resulting from the COVID-19 outbreak that has potentially increased risks to public health and economic implications. The global economic slowdown amid this virus outbreak might also impact Indonesia's economy whose growth rate was earlier forecast at between five and 5.4 percent this year. "We must respond to this challenge," he emphasized. On Thursday, the rupiah exchange rate fell to Rp16,000, from Rp15,963 per US dollar, according to the Jakarta Interbank Spot Dollar Rate (JISDOR). COVID-19, which initially struck in the Chinese city of Wuhan at the end of December 2019, has killed at least 8,778 people and infected no less than 209,839 people in 168 countries and territories worldwide, according to the World Health Organization (WHO). In Indonesia, the virus has infected at least 309 people and claimed 25 lives, while 15 others have recovered and been discharged from hospitals. The percentage of Indonesia's death toll is the highest of those in other countries in Southeast Asia. Taking into account the rising death toll and the spread of this virus, the WHO has declared the coronavirus outbreak a global pandemic. The Indonesian government has put in place precautionary measures since the early stage of the coronavirus outbreak. In addition to installing thermal scanners at the country's airports and seaports as well as making preparations at hospitals across the archipelago, the Indonesian government has repatriated several hundred citizens. On February 2, a total of 238 Indonesian nationals were airlifted from Wuhan, China, to be quarantined in Natuna District's Riau Islands Province. All these Indonesians were found to be healthy and were reunited with their families. On March 2, 2020, President Jokowi announced that two Indonesians had tested positive for COVID-19. The number of infected confirmed by the government tended to rise steadily over the past days. (ANTARA)

More in this category: « President to Evaluate Mass Religious Events amid COVID-19 Outbreak Death Toll from COVID-19 Rises to 48 »
back to top
Home