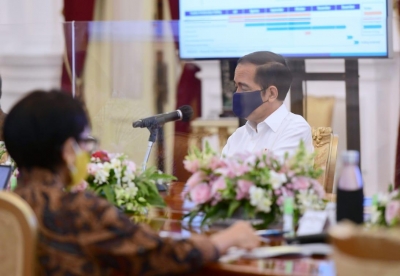 President Jokowi chaired at a limited meeting at the Merdeka Palace, in Jakarta on Thursday. setneg.go.id

Integrated management support will help bring about a leap in Indonesia's tourism sector, according to President Joko Widodo (Jokowi)."Thus, the country will take a leap in the tourism sector as well as in the management of the tourism ecosystem and its supporters," President Jokowi stated at a limited meeting at the Merdeka Palace, in Jakarta on Thursday.The head of state highlighted the significance of support from the world of aviation that had to be streamlined through more integrated management.Jokowi called for greater consolidation of flights, from upstream to downstream."This has never been done, starting from airline to airport and flight service management," the president noted.The president is looking for it to be connected to destination management as well as with hotel and travel management."This should also extend to the management of local products and creative industries that we have," he stated.The Central Statistics Agency (BPS) announced that Indonesia's economy contracted by 5.32 percent in the second quarter."I saw that the tourism and aviation sectors were impacted and had deeply contracted," the president stated.The Ministry of Tourism and Creative Economy had earlier readied strategies to cope with a projected decline in foreign tourist arrivals on account of the COVID-19 pandemic.In a statement released here on Tuesday, spokesperson for the ministry's Task Force for COVID-19 Handling, Ari Juliano Gema, remarked that the ministry had estimated a significant fall in foreign tourist visits to Indonesia owing to the pandemic."We have prepared strategies as a precautionary measure to handle the decline in foreign tourist visits by applying new normal protocols in the sector," he noted.The protocols will be applied in regions ready to receive tourists."President Joko Widodo has instructed us not to act hastily. During the recovery period, we will first focus on efforts to mobilize domestic tourists," Gema revealed.The spokesperson pointed out that implementation of the protocols will depend on regional preparedness. The ministry is working on coordinating with regions that are ready to apply the protocols. (ANTARA)