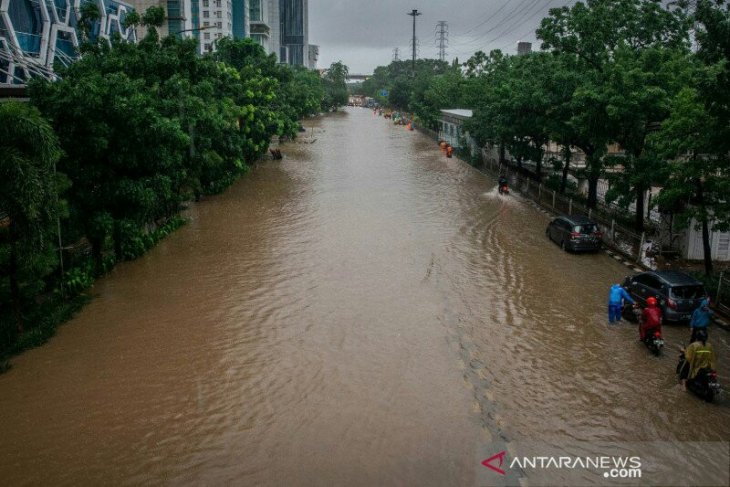 A resident wades through a flooded road along with a motorcycle in Cawang, East Jakarta, on Wednesday(ANTARA)

Jakarta - Social Affairs Minister Juliari P. Batubara conducted an inspection of a public kitchen for flood victims sheltered at the PSBN House in Cawang, East Jakarta, on Thursday. During the visit, he vowed to undertake steady, concerted efforts to offer humanitarian aid to flood evacuees in Jakarta. "For the time being, the Social Affairs Ministry supports the local administration (in handling the flood evacuees). The BNPB (the National Disaster Mitigation Agency) and SAR (Search and Rescue) officers have stepped in (to help them). We will continue to monitor (the situation) by utilizing all resources that we have," he remarked. Batubara pointed to East Jakarta being the municipality in Jakarta to have borne the maximum brunt of the flooding. "Of course, we give priority to the worst affected areas (in providing humanitarian aid)," he noted. He admitted that several victims could not be evacuated from their flooded homes that were difficult to reach. A total of 31,232 residents of Jakarta were compelled to flee their flooded homes as of Wednesday night, according to the flood command post. Some 310 of the flood victims were found in Bendungan Hilir, Petamburan, and Karet Tengsin, Central Jakarta. They were provided shelter at two evacuee camps. In North Jakarta, floods affected 1,515 people in Rorotan, Semper Barat, Semper Timur, Sukapura, Kelapa Gading Timur, and Pegangsaan Dua. They sought refuge in 23 evacuee camps. The number of flood evacuees in West Jakarta reached 10,686 people, who were accommodated in 97 evacuee camps. They came from Jelambar, Tomang, Wijaya Kusuma, Srengseng, Semanan, Kalideres, Tegal Alur, Pegadungan, Kota Bambu Selatan, Kedoya Utara, and Sukabumi Selatan. A total of 13,516 flood evacuees in East Jakarta were sheltered at 99 locations. The floods affected Kebon Manggis, Kampung Melayu, Bidara Cina, Cipinang Besar Selatan, Klender, Pondok Bambu, Pondok Kelapa, Cawang, Balekembang, Dukuh, and Cipinang Melayu. In South Jakarta, 5,305 people fled their flooded homes and were housed at 48 different locations. The flooding in South Jakarta affected Gunung, Petongan, Pengadengan, Cilandak Timur, Pejaten Timur, and Manggarai Selatan. (ANTARA) 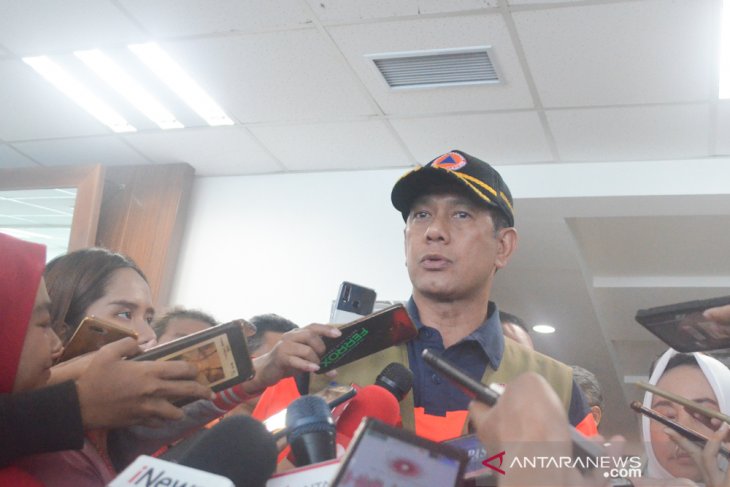 Weather modification technology will be applied to overcome the massive flooding that struck the capital, Jakarta, and its surround areas, Head of the National Disaster Mitigation Agency (BNPB) Doni Monardo confirmed in Jakarta on Thursday. "We had discussed weather modification, which has been prepared today and will be applied this evening," Monardo said, adding that BNPB will perform this along with the Agency for the Assessment and Application of Technology (BPPT) and Indonesian Military (TNI). This technology is meant to decrease the volume of clouds in order to manage rainfall, as BPPT planned on translocating the rain to the west areas of Sunda Strait or Lampung, while if the wind blows in the direction of the east, the rain will hit the water reservoirs of Jatiluhur or Jatigede. The TNI Headquarters has been provided two units of aircraft, CN295 and Cassa, since this morning, which are expected to perform the operational process of modification. The high rain intensity had caused flooding in the New Year in Jakarta and the satellite cities, as well as in Banten and several regions of West Java on the very first day of 2020. Solely counted over the Jakarta area, the flooding led to as many as 31.232 residents fleeing, according to the flood command post. The death toll rose to 21 people as they suffered from hypothermia, buried by landslides and drowned by the floods. (ANTARA)

1,500 Indonesia's Artefacts Repatriated from the Netherlands 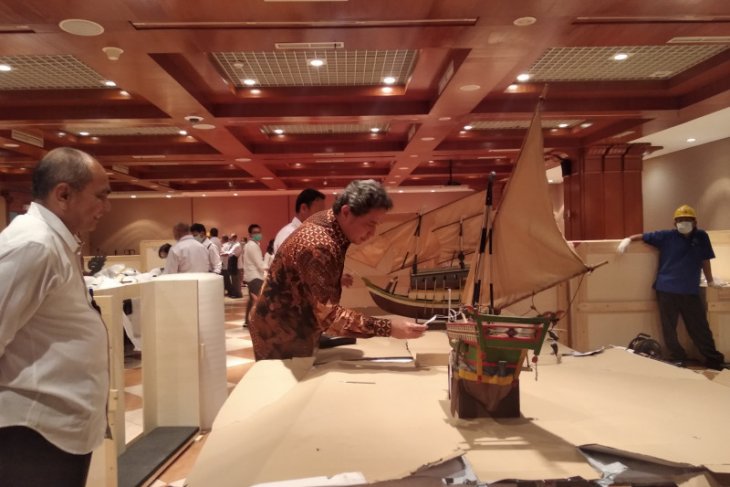 The Ministry of Education and Culture's director general of culture, Hilmar Farid, in Jakarta, Thursday (Jan 2, 2019) observed an artefact that has returned to Indonesia from the Museum Nusantara in Delft, Netherlands (ANTARA)

Jakarta - Some 1,500 of Indonesia's pre-dated artefacts have been repatriated for the first time ever from Museum Nusantara in the Netherlands, a high-ranking official said in Jakarta, Thursday, citing collections that arrived on December 23, 2019.

"The collections earlier had been displayed at Museum Nusantara or Museum Prisenhof in the Netherlands," the Ministry of Education and Culture's Director General of Culture, Hilmar Farid said. During the Dutch colony's occupation of Indonesia, thousands of the country's historic artefacts were seized for both museum and personal collections. Most of the artefacts were found in Delft, a city where most bureaucrats of the Dutch Indies took their degrees. Before the repatriation, the Indonesian government had been negotiating with the Government of the Netherlands since 2015, Farid explained. "We expect more of Indonesia's heritage items to return home in the future. We thank the National Museum of Indonesia as it has assisted the four-year repatriation process," he explained. Not all artefacts were repatriated to Indonesia, according to the director general. "During the negotiation, we had selected which artefacts we need for National Museum's collections," he added.  (ANTARA)

Indonesia's Reputation as Investment Destination Must be Maintained 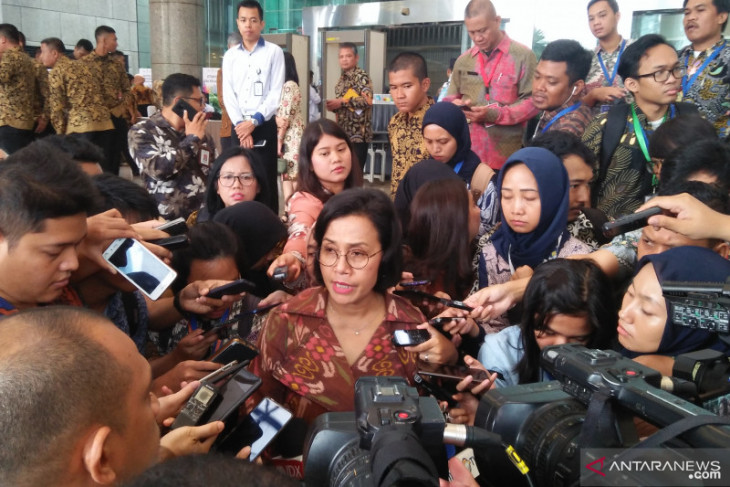 Jakarta - Indonesia's reputation as an investment destination, particularly that of the capital market, should be maintained, Finance Minister Sri Mulyani Indrawati has said. Based on the Financial Services Authority (OJK) data, investor confidence in Indonesia's economic prospects was quite high. "This reputation should be maintained because Indonesia in the future needs capital inflow both internationally and domestically," Sri Mulyani said in Jakarta Thursday. The Ministry of Finance together with OJK, Bank Indonesia, and the Indonesian Deposit Insurance Corporation (LPS) will seek to build economic stability for investors. The flow of capital into Indonesia would be able to raise the economy if all parties maintained investor confidence in Indonesia, the former Managing Director of the World Bank revealed. Even during 2019, when the world economy was affected by a trade war, the Indonesian Composite Index (IHSG) grew positively by 1.7 percent, OJK Board of Commissioners Chairman Wimboh Santoso said speaking earlier. The growth was moderate, with the IHSG at 6,299.5 by the end of 2019, he said. Apart from the growth of the IHSG, the net sale of foreign investors in the stock market increased significantly by Rp50.7 trillion in 2018 to a net buy of Rp49.2 trillion in 2019 and the number of investors also increased significantly in 2019, Wimboh also said. Also, the funds raised in the capital market totaled Rp166.8 trillion with 60 new issuers and three equity crowdfunding, Wimboh continued. The amount was quite stable as compared to the previous year when it reached Rp166.1 trillion with 62 new issuers, he said. "This indicates that market confidence in Indonesia from investors is still quite high," he added. The high market confidence in Indonesia was also confirmed through a Bloomberg publication which conducted a survey of 57 global investors and traders with Indonesia's results ranked highest for investment purposes, Wimboh stated. The achievement was also the most promising among other emerging market countries, especially investments in the stock market and debt securities, he revealed. "This will be history if we can defeat China and India. This has never happened before," he said.  (ANTARA)