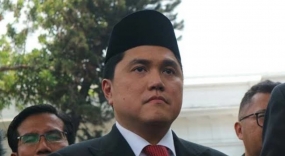 The Food and Drug Supervisory Agency (BPOM) and the Indonesian Ulema Council (MUI), will depart for China and the United Arab Emirates next month, to ensure the halalness of the Covid-19 vaccine imported from the two countries.

The Chief Executive of the Committee for Handling COVID-19 (KPCPEN) and National Economic Recovery, Erick Thohir admitted that he had met with Vice President Ma'ruf Amin to ask for support.

He said, during the first vaccine test in Bandung, MUI was present to ensure the safety and halal vaccines of the two countries.

"We also ensure that this vaccine is halal and according to our standards. Therefore we send BPOM to the UAE and God willing to China this October with MUI," Erick said at a webinar entitled 'Healthy Transportation, Advanced Indonesia' held by the Ministry of Transportation, on Tuesday.

Erick also ensures that Indonesia will receive 310 million doses of the vaccine by the end of 2021. This number includes an additional 10 percent in the agreement between Indonesia and Sinovac in China and the United Arab Emirates.

Meanwhile, until the end of the year, there will be 30 million vaccines first. This vaccine will be injected first for medical personnel such as doctors, nurses, and midwives before they carry out mass immunization to the community early next year.

"We hope that we can stabilize it rather than maintain public health until we can produce the red and white vaccine which will be developed in early 2022," Erick said.

In the vaccine development program, the Indonesian government will inject around IDR 5 trillion in funds into Bio Farma. The target is that the company can produce as many as 30 million to 40 million vaccines.

Bio Farma, through a pharmaceutical BUMN holding, collaborates with Sinovac Biotech Ltd from China. Later, Bio Farma will also collaborate with the Coalition for Epidemic Preparedness Innovation (CEPI), a collaboration between government and private sector at the global level based in Norway. (RRI) 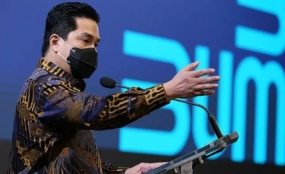 Why Gov't Don't Lockdown The Country

The minister of state-owned enterprises who is also the head of the Covid-19 Task Force, Erick Thohir, revealed that the reason the government not to take a lockdown policy during the Covid-19 pandemic is not merely concerned with the economic sector.

"Lockdown did not lockdown as though it protects economic interests, I don't think so," Erick said in his presentation at the webinar series entitled "Healthy Transportation, Advanced Indonesia" in Jakarta, Tuesday.

Erick explained that no country has a formula for dealing with the COVID-19 pandemic.

"No country has a formula for economic recovery. The formula for each country is very different because this has never happened before. Health affects the business and monetary sector," he said.

Compared to other G20 countries, such as the United States, France, and Italy, Erick thinks that Indonesia still has a very good position.

"If we look at other G20 countries, whether India minus 23 percent, Britain, France, the United States, we are in a very good position. Compared to other Southeast Asia countries, it is also the same as Malaysia, the Philippines, Singapore, Thailand, and others, "he said.

For that, he said this year we must first focus on the health sector by implementing health protocols, such as wearing masks, washing hands, and maintaining distance.

"If you look at this trend, then this timeline agreed by the committee cannot be reversed. Testing, tracing, treatment is a must," he said.

He hopes that massive vaccination can be started next year, in line with the investment stimulus that will also move.

"If the vaccine is to start early next year, how can economic stimulus investment continue to go hand in hand without forgetting health aid? We hope that later there will be a lot of research stating that next year's economic growth Indonesia can return to positive," he said.

After the Healthy Indonesia goal has been achieved, Erick continued, the next step is Growing Indonesia.

Erick considered the COVID-19 pandemic to be an opportunity to reform the health system or transform the economy. (Antaranews) 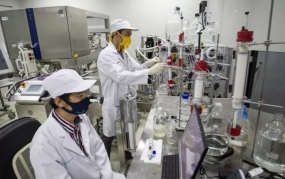 Indonesia's free and active foreign policy puts this country in a strategic position amid global competition for the development of the COVID-19 vaccine, according to observers.

The University of Indonesia international relations observer Shofwan Al Banna Choiruzzad assessed that it is in the interest of Indonesia and other countries in the world today to get a vaccine from whoever has developed it.

"The position of Indonesia, which is free and active, is clear [...] Our interests are not who will win or lose in this geopolitical competition, but to ensure that this great political power does not have a bad impact on us," Shofwan said.

Several countries are developing a COVID-19 vaccine, and some have entered the stage of clinical trials in humans to examine how potent the vaccine is used and how side effects it might cause - before finally being produced and used en masse.

The United States now has, at least, six vaccine candidates from six pharmaceutical companies are in the clinical trial phase. There is also a Russian with Sputnik V which was registered last August and is now ready to be tested on 55,000 volunteers.

China is also not left behind with the vaccine from the Sinovac company - which has signed a collaboration with Bio Farma and is carrying out phase III clinical trials in Bandung, including to West Java Governor Ridwan Kamil.

"What concerns Indonesia is how to encourage international organizations to more facilitate cooperation among countries whose tendencies are competing," Shofwan added.

Paramadina University international political observer Ahmad Khoirul Umam, separately, explained that "in (vaccine) production, the fact is that Indonesia could not have sufficient logistical strength or research capacity."

"Like it or not, in international relations, we must use the bandwagoning method - by holding it to countries that have adequate research and production capacity for the procurement of the COVID-19 vaccine," Umam said.

Therefore, according to him, Indonesia must intensify communication with external powers, both countries, and companies from other countries, and get the transfer of knowledge and technology from them.

"And the most important part of the vaccine (procurement effort) is the transfer of knowledge and transferring technology so that Indonesia does not depend on procurement and production (from outside)," concluded Umam. (Antaranews)

The government claims that the absorption of the National Economic Recovery (PEN) program has shown improvement.

Coordinating Minister for Economic Affairs Airlangga Hartarto said that the absorption of the PEN program funds amounted to Rp 237 trillion or 34.1 percent of the total PEN budget ceiling of Rp 695.2 trillion.

"Absorption is 34.1 percent of the year's Rp. 695 trillion. And by month to month, there is an increase of 30.9 percent," Airlangga said in a virtual press statement, in Jakarta, on Monday.

Airlangga claimed that there was an increase in budget absorption in several sectors. Namely, in the health sector 31.6 percent, social protection 62.81 percent, regional government sectoral 27.68 percent, and MSMEs 91.43 percent.

"And the first semester to the second semester in September, the absorption trend has increased by Rp237 trillion," said Airlangga.

Airlangga, who is also the Head of the Committee for Handling Covid-19 and National Economic Recovery (KPCPEN), said there were increases in other sectors without mentioning the amount of budget absorption.

Airlangga also said that the government continues to push for the realization of the budget and push through tourism incentives. This budget will stream to the vaccine program.

"The President said to channel tourism incentives budget to independent vaccine procurement when the clinical trial is over," Airlangga said. (RRI)