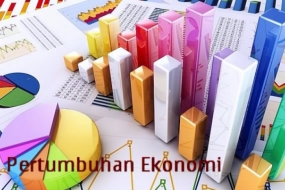 Economic observer at the Institute for Development of Economics and Finance (Indef) Bima Yudistira has forecast Indonesia's economic growth in the fourth quarter of 2020 to improve, albeit still hovering in the negative zone."Negative growth is still recorded in the fourth quarter, with the range probably being minus two percent," Yudistira stated when contacted in Jakarta on Tuesday.Indonesia's economy shrank by 5.3 percent in the second quarter of 2020, considered to be the deepest contraction.An improvement to minus 3.49 percent was recorded in the third quarter of 2020.He expounded that the economic growth projection at the end of 2020 was still negative due to a spike in the number of new COVID-19 cases in Indonesia, even surpassing eight thousand cases on December 3, 2020."Despite good news about vaccines, the number of COVID cases in the fourth quarter had still been relatively high and also risen to over eight thousand cases," he noted.In addition to an increase in the number of cases, economic growth in the fourth quarter was also influenced by a cutback in the year-end long holidays.Yudistira gauged that economic growth at the end of the year was so far usually supported by the long Christmas and New Year’s holidays, specifically from the tourism and travel or transportation sectors.The observer believes that the cuts will have an impact on household consumption that is also expected to slow down.Meanwhile, a positive contribution to bolster the Indonesian economy to improve in the fourth quarter of 2020 is the trade balance that moved into surplus, especially the export performance that improved owing to the rising world oil prices in November 2020.The increase in world oil prices boosted oil and gas exports by 27 percent as compared to October 2020.Yudistira stated that it also boosted commodity prices and was supported by economic recovery in Indonesia's export destination countries, including China, Japan, India, and Australia."The manufacturing industry is starting to move, indicated by high raw material imports, which rose 13 percent in November, and on a monthly basis, the manufacturing industry has been optimizing production capacity again," he remarked.With this development, he projects Indonesia's overall economic growth in 2020 to range between minus two and minus 3.5 percent. (Antaranews) 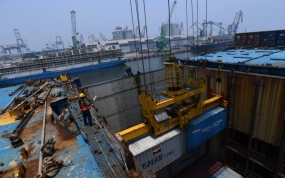 Indonesia posted a trade surplus of US$12.66 billion, with export value totaling US$15.28 billion and import value of US$12.66 billion, according to the Central Bureau of Statistics (BPS)."This surplus is encouraging since there was an increase in exports on a month-on-month (mom) basis of 6.34 percent, while imports also increased by 17.4 percent mom, although year-on-year (yoy), it stayed down," Head of BPS Suhariyanto stated at a virtual conference here on Tuesday.Indonesia's trade surplus and export hike in November 2020 were supported by rising demand and increasing prices for mainstay commodities, especially coal and palm oil.In terms of commodities, animal fats and oils, mineral fuels, and iron and steel were the biggest contributors to exports this month.Indonesia's trade experienced a surplus with several countries, including with the United States, clocking a surplus of US$948.7 million, US$603.8-million surplus with India, and US$533.4-million surplus with the Philippines.Nonetheless, Indonesia's recorded a trade deficit with several countries, such as US$572.6 million with China, US$198 million with Hong Kong, and US$142.6 million with Australia.Thus, a surplus of US$19.66 billion in the goods trade balance was registered during the January-November 2020 period. Indonesia had recorded a deficit of US$3.5 billion during the corresponding period in 2019."I would like to conclude that the performance of Indonesia's November 2020 trade balance is very encouraging," Suhariyanto noted. (Antaranews)

All vaccines, including those against COVID-19, are tested for safety and efficacy at all stages of clinical trials, from Phase 1 to Phase 3, head of the Eijkman Institute for Molecular Biology, Amin Soebandrio, said."Phase 1 is for testing safety; (at this stage of a trial) for the first time it (a vaccine) is injected into humans, so the numbers (of volunteers) are small first, several tens of people," Amin said in Jakarta on Monday.Vaccine testing involves comparing a sample of people who get a vaccine against those who do not, he said adding, COVID-19 vaccines are tested for their ability to boost immunity against the virus.During clinical trials for vaccines, one group of people receives an injection that contains the vaccine, while another group receives an injection that does not contain the vaccine, also known as a placebo, he explained further."Then, compared to what percentage the symptoms develop, for example if the difference is very large or those that cause symptoms do not exist at all, then it will be declared safe," he added.If the group administered a vaccine and the group given a placebo do not show any adverse effects, a vaccine is declared safe, he stated."The point is that if it is safe if we can show the risk is much smaller than the expected benefits," Amin said.Phase 2 clinical trials involve several hundred people, he said. At this stage, the results are reviewed to determine the efficacy and side-effects of a vaccine, he added.If a vaccine passes stages 1 and 2 of clinical trials, then it enters stage 3 trials, during which it is administered to thousands of people to check whether it is safe, effective, and useful, Amin said.Volunteers who receive a COVID-19 vaccine in Phase 3 trials may likely have been exposed to the SARS-CoV-2 virus, which causes COVID-19, during their daily activities, he added.Clinical trials also help determine the vaccine dosage that best provides protection and is still safe to administer without any negative effect on recipients, he continued.Therefore, all vaccines must complete Phase 1, 2, and 3 clinical trials, with results targeted to strengthen a person's immune system, he stressed. (antaranews) 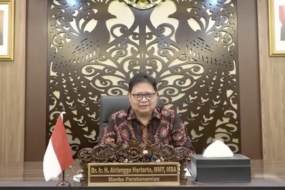 The Indonesian economy is expected to grow in the range of minus 2 percent to positive 0.6 percent in the fourth quarter of this year, Coordinating Minister for Economic Affairs, Airlangga Hartarto, said.The projected growth could be achieved if the momentum for recovery that began in the third quarter, when the economy showed a smaller contraction of 3.49 percent compared to 5.32 percent in the second quarter, is maintained, Airlangga stated."This shows a quarter to quarter growth of 5.05 percent. If we can maintain this momentum, the growth in the fourth quarter is estimated to be minus 2 percent to positive 0.6 percent,” he said at the 2020 Bisnis Indonesia Award event in Jakarta on Monday.Economic growth data for the second and third quarter have shown that Indonesia has begun to bounce back after hitting rock bottom, so the chance for recovery needs to be maintained, he stressed.Indonesia has an opportunity for economic recovery and positive growth of 0.6 percent given the increase in domestic demand and consumer confidence, as reflected in increased household consumption, the minister explained."Economic improvement in developed and developing countries related to the Purchasing Managers Index (PMI) (shows) manufacturing in various countries has started to be positive, and in Indonesia it has also reached 50.6," he said.Not only that, the inflation rate that was maintained at the level of 1.59 percent (yoy) in November could also be a driving force for better growth in the fourth quarter, he added.Several other sectors are also likely to contribute to positive growth, such as agriculture, plantations, education, information and telecommunications, health, and social activities, he said."In addition, the manufacturing, trade and consumption industries, which have a big contribution to GDP, (are) also experiencing positive (growth),” he noted.Meanwhile, in the financial market, despite a decline, the JCI (Jakarta Composite Index) indicator has returned to its pre-COVID-19 level of 5,900, and the rupiah exchange rate has strengthened again by Rp14,100, Hartarto observed."We see that the flow of capital has returned to Indonesia, and of course, this is a confidence that continues to be encouraged and shows real sector activity (is likely) to boost economic growth in 2021," the minister said.Furthermore, from an external perspective, it shows that a positive trade balance will continue in 2020, he added. The trade surplus stood at US$3.61 billion in October, and was recorded at US$17.07 billion for the January-October period."It shows the resilience of our external sector, and we encourage optimism with our foreign exchange reserves of US$130 billion, showing that our financial sector has the same resilience," Hartarto remarked.Therefore, he said, he is optimistic that 2021 would serve as an opportunity for the national economy to manage a full recovery due to increasing economic activity.“(With) The health protocol that we continue to maintain, the government believes that 2021 will be a year of recovery. (It is expected to be) A year that provides opportunities for the national economy so that our national economy can move,” he said. (antaranews)