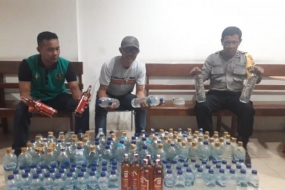 The police in Jayapura Port, Papua Province, seized 157 bottles of alcoholic drinks from Motor Vessel "Labobar" which arrived at the port from Bitung, North Sulawesi Province, on Saturday evening but the policemen did not arrest anyone in this bootleg liquor case.The policemen found the bottles of home-made alcoholic drinks under the beds of several passengers on the vessel's deck 4, 5, 6, and 7 during a raid against bootleg liquor, Papua Police Spokesman Sen.Coms.Ahmad Kamal said here on Sunday.The police investigators questioned several passengers who stayed near the confiscated liquor bottles but none knew the owners, Kamal said.On early Sunday, MV Labobar  departed to Biak - Serui - Nabire - Manokwari - Sorong - Ternate - Bitung - Pantoloan - Balikpapan – Surabaya by carrying 1,104 passengers, he said.The sales of alcoholic drinks are banned in Papua. In early December 2019, the Papuan provincial government had ordered all district and city administrations to ban sales of alcoholic drinks ahead of the 2019 Christmas and New Year's Eve celebrations, and the convening of the 2020 National Games (PON).First Assistant of the Papua Provincial Government's Secretary Doren Wakerwa said the Papuan government had effectively banned the production, distribution and sales of alcoholic beverages since 2016 based on the Regional Government's Regulation Number 15/2013. (ANT) 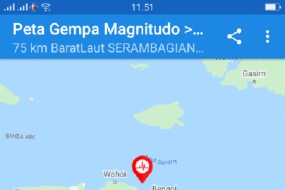 The Central Maluku Disaster Mitigation Agency (BPBD) has revealed that the 5.6-magnitude earthquake that rocked East Seram District's area in Maluku Province on Saturday had damaged several buildings but there were no fatalities owing to this quake.Following the earthquake which was followed by 13 aftershocks, no residents took refuge because the quake did not potentially trigger tsunami, the agency's head, Bob Rahmat, told ANTARA who contacted him from Ambon, the capital of Maluku Province, on Sunday.Rahmat urged locals to stay calm and did not let themselves get provoked by rumors and misleading information. So far, the agency noted that five houses got damaged. The earthquake also damaged a water storage and a local company's building.The district's electricity supply remained normal in the aftermath of this earthquake whose epicenter was located around 68 kilometers away northwest of Bula city in East Seram District at a depth of 12 kilometers.Earthquakes regularly rock various parts of Indonesia due to the fact that the country lies on the Circum-Pacific Belt, also known as the Ring of Fire, where several tectonic plates meet and cause frequent volcanic and seismic activities.On Feb 6, 2020, for instance, a 6.1-magnitude earthquake jolted the Indonesian Island of Miangas in North Sulawesi Province at 08.40 p.m. local time, prompting many residents to rush out of their homes in search of safety.

One of the deadliest earthquakes in Indonesia that occurred over these past two years was the one that struck several areas of Centra Sulawesi Province.The 7.4-magnitude earthquake which was followed by tsunami that hit the areas of Palu city and the districts of Donggala, Paringi Moutong, and Sigi on Sept 28, 2018 claimed 2,102 lives, injured 4,612, and rendered 680 others missing.A total of 68,451 homes were seriously damaged, and 78,994 people were displaced.Due to a large number of rotting corpses, the authorities and humanitarian workers decided to bury them in mass graves.Meanwhile, material losses inflicted by the twin deadly disasters were estimated to reach Rp15.29 trillion.The provincial capital of Palu took the brunt of the disaster, with material damage and losses recorded at Rp7.6 trillion, or 50 percent of the total estimate, according to the National Disaster Mitigation Agency (BNPB).The material damage and losses in Sigi district were recorded at Rp4.9 trillion, or 32.1 percent, Donggala district at Rp2.1 trillion, or 13.8 percent, and Parigi Moutong district at Rp631 billion, or 4.1 percent.The material damage in the four affected areas reached an estimated Rp13.27 trillion, while the material losses reached approximately Rp2.02 trillion, the agency revealed in October 2018. (ANTARA) 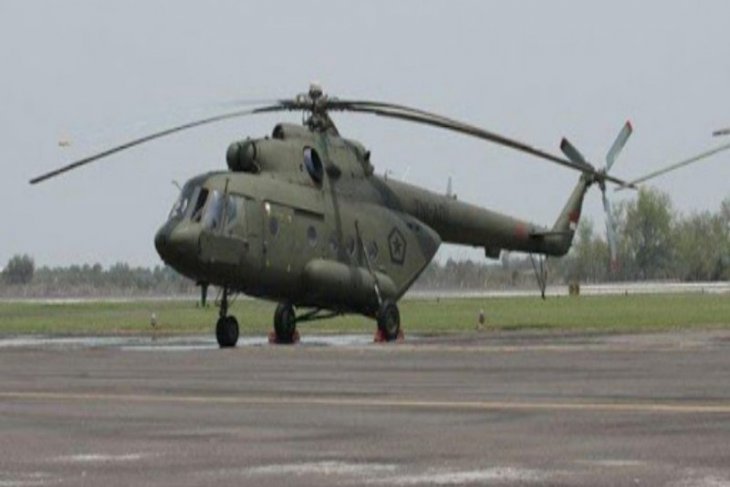 Jayapura, Papua - The search efforts to locate the Indonesian Army's MI-17 helicopter which has gone missing in Papua Province since June 28, 2019, were resumed on Sunday by conducting a sweeping aerial operation above the area of Mimin Village, a military officer said. The aerial operation was carried out by using a civilian chopper, Commander of the 1715 Yahukimo District Military Command Lt.Col.Eko Budi told ANTARA who contacted him from Jayapura, the capital of Papua Province, on Sunday. Five soldiers joined the aerial operation. During the search mission, the civilian chopper swept the area of Mimin Village because it might be the location of the MI-17 crash, he said. The Mimin Village area remains regarded by the residents of Pegunungan Bintang District as a sacred natural site, and the search and rescue ground team members did not sweep the area, he said. "May those involving in the search operation be able to locate the missing chopper," he said. Regarding this missing MI-17 helicopter, Army Chief of Staff Gen. Andika Perkasa had ever hinted that the search efforts would be continued. "We are optimistic that all Indonesians will pray for the immediate finding of the missing helicopter," he told journalists after the inauguration of the military academy's graduates in Magelang, Central Java, in July last year. On July 8, 2019, the search operation to trace the helicopter was conducted by the regional military command personnel along with those from the National Search and Rescue Agency (SAR) and the Indonesian Defence Forces' Headquarters, he remarked. However, the SAR's efforts to locate the missing helicopter after taking off from Oksibil, Pegunungan Bintang District, on June 28 were hindered by factors including the erratic weather conditions and difficulties on the ground due to inaccessibility to roads. Consequently, search efforts were conducted through sweeping aerial operations, Perkasa revealed. Since the day of its missing, search efforts to locate the helicopter have been steadily made by involving a Bell Helicopter 206 and Bell Helicopter 412 bearing registration number HA-5177. The MI-17 helicopter, bearing registration number HA-5138, was carrying 12 passengers and crew members on board, who had earlier flown to Okbibab to deliver logistics to soldiers serving in the area. The crew members aboard the helicopter were pilots CPN Captain Aris and CPN Lieutenant Bambang, co-pilot First Lieutenant CPN Ahwar, Head Sergeant Suriyatna, Sergeant Dita, Head Private Dwi Purnomo, and Private Aharul. The passengers, who were members of the Battalion 725/WRG, comprised Second Sergeant Ikrar Setya Nainggolan, Private Yanuarius Loe, Private Risno, Second Private Sujono Kaimuddin, and Second Private Tegar Hadi Sentana. (ANTARA) 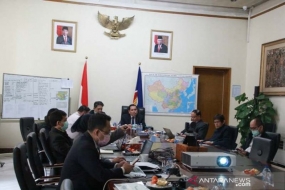 The Majority of Indonesians have Left Mainland China: Ambassador

Jakarta - The majority of Indonesians in mainland China had returned to Indonesia following the Indonesian Embassy's call for them to stay in their hometowns while waiting for the return of normalcy as the number of people confirmed to have recovered from the new coronavirus infection has climbed to 2,651. "The majority of our citizens have returned home. The Chinese authorities have also extended the school holiday," Indonesian Ambassador to China Djauhari Oratmangun told ANTARA who contacted him from Jakarta on Sunday. The Indonesian Embassy in Beijing had issued an official statement letter containing a call for Indonesians across China to return home if they had no essential reasons to keep staying to help them get rid of the impacts of deadly novel coronavirus outbreak. The official statement letter was dated on January 29, 2020, and signed by Coordinator of the Protocol and Consular Affairs at the Indonesian Embassy in Beijing Ichsan Firdaus. Despite the fact that the majority of Indonesians had left China, Ambassador Djauhari Oratmangun said seven Indonesians still stay in Hubei Province, the epicenter of China's novel coronavirus outbreak. They are all in good health, he said, adding that he holds daily video calls with them to know about their health condition. "Alhamdulillah (Thank God), they are all well," he said. The Indonesian Government had brought 238 Indonesians home. They were airlifted using a chartered aircraft and arrived in Batam city, Riau Islands Province, on Feb 2. On the same day, they were all flown to Natuna and quarantined. Before their departure, the health of these 238 Indonesian evacuees had been thoroughly examined by the Chinese authorities before being allowed to board the aircraft. The Chinese health authorities confirmed that they were all in good health and could be airlifted, according to Indonesian Health Minister Terawan Agus Putranto. There were seven other Indonesians who did not join the evacuation. Four of the seven were offered the opportunity to join the emergency evacuation but refused because they felt more comfortable there, while three others failed the health examinations by Chinese authorities, Putranto said. The novel coronavirus outbreak in Wuhan has seriously challenged mainland China as the death toll of this virus has risen to 813. Thus, the death toll of this 2019-nCoV has exceeded that of SARS epidemic. Considering the rising mortality rate and the number of those infected inside and outside mainland China, the World Health Organization (WHO) has declared this 2019-nCoV as a Public Health Emergency of International Concern. According to WHO's official website, as of February 3, 2020, there had been 23 countries which have been reported with confirmed 2019-nCoV cases. Among them are Japan, South Korea, Vietnam, Singapore, Thailand, Australia, Malaysia, USA, and the Philippines. Indonesia and many other countries are working with the Chinese authorities to evacuate their citizens from Wuhan. The evacuation is part of the accountability of the governments of those countries to their respective citizens. (ANTARA)