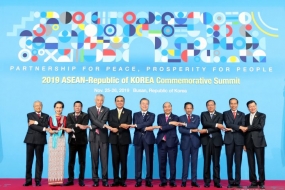 President Joko Widodo (Jokowi) attended the 2019 ASEAN-Republic of Korea (RoK) Commemorative Summit in Busan, South Korea, Tuesday, to celebrate the 30th anniversary of dialogue partnership between ASEAN and the Republic of Korea. South Korean President Moon Jae-in greeted Jokowi upon arrival at the Busan Exhibition Convention Center (BEXCO) at 9 a.m. local time. Leaders of 10 ASEAN member nations, including Singaporean Prime Minister Lee Hsien Loong, Brunei's Sultan Hassanal Bolkiah, Thai Prime Minister Prayut Chan-ocha, Philippine President Rodrigo Duterte, and South Korean President Moon Jae-in, were attendees at the summit. Moon remarked in a keynote speech that the history of exchanges, lasting over several centuries, was gradually pushing East Asia toward the center of the global economy again. "Asia is the future of the world," he remarked, emphasizing the significance of economic cooperation between South Korea and the ASEAN. The economies of ASEAN and Korea were rapidly approaching, Moon remarked, adding that Korea and the ASEAN were everlasting friends and a community of destiny. "Korea will be a community growing together with the ASEAN, beyond ASEAN friends. Under the thought that the development of ASEAN is that of Korea, Korea will always be with the ASEAN," he stated. Moon also sought deeper cooperation between the ASEAN and South Korea to face protectionism, international crimes, and industry revolution 4.0. "We must strengthen cooperation and solidarity, especially in facing challenges of the industry revolution 4.0," he noted. Indonesian Foreign Affairs Minister Retno Marsudi had earlier expounded that the ASEAN-RoK Commemorative Summit would comprise three sessions. The first session aims at deliberating on the evaluation of three decades of cooperation between the ASEAN and South Korea and future cooperation for the subsequent 30 years. The second session will focus on discussing connectivity issues, while the third session would be a retreat for discussion on regional and global issues. The ASEAN groups Brunei Darussalam, Cambodia, Indonesia, Laos, Malaysia, Myanmar, the Philippines, Singapore, Thailand, and Vietnam.//antara 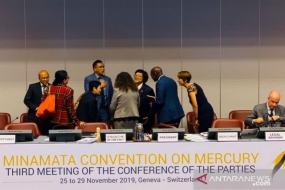 Indonesia to host COP 4 to Minamata Convention in 2021

Indonesia has been chosen to host the Fourth Meeting of the Conference of the Parties (COP 4) to the Minamata Convention in 2021, Environmental Affairs and Forestry Minister Siti Nurbaya Bakar stated. "During the second plenary on Nov 25, 2019, at 6:20 p.m. local time, it was decided that Indonesia will be the host of the COP 4 to the Minamata Convention in 2021 that is planned in Nusa Dua, Bali," Bakar, who was attending the COP 3 in Geneva, Switzerland, noted in a statement on Tuesday. Indonesia’s appointment to be the next host of the Minamata Convention meeting in 2021 was deemed crucial since Indonesia also faced the problem of mercury pollution, with high complexity, she remarked. "Indonesia has paid special attention to the issue since 2015 when the president was visiting Maluku," she noted. Illegal, small-scale gold mining activities have caused the mercury problem in Indonesia, she added. "We are aware of several problems and victims. Hence, during a limited cabinet meeting in 2017, the president instructed to tackle the problem and prevent the impacts of mercury and the Minamata disease outbreak," she remarked. The minister also echoed the public’s high concern over this case. "On the whole, this is crucial, as the President Jokowi administration is determined to solve environmental problems. Indonesia will benefit from the international event to be held in Indonesia," she remarked. The Minamata Convention on Mercury is a global treaty to protect human health and the environment from the adverse effects of mercury. It was agreed at the fifth session of the Intergovernmental Negotiating Committee on mercury in Geneva in January 2013 and adopted on October 10, 2013, in Kumamoto, Japan. Article 3 of the Minamata Convention addresses sources of supply and trade in mercury, laying down measures on primary mercury mining, stocks of mercury or mercury compounds, excess mercury from the decommissioning of chlor-alkali plants, as well as on mercury exports and imports.//antara. 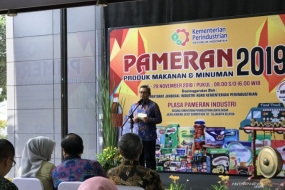 The Industry Ministry organized the Food and Beverage Exhibition 2019 on November 25-29 in an attempt to promote the domestic industry. "The exhibition is expected to encourage entrepreneurs in the food and beverage sector to promote products and seek inputs from customers," the ministry's Secretary General, Achmad Sigit Dwiwahjono, stated in Jakarta on Monday. The expo showcased a plethora of food and beverage products, including snacks and local culinary delicacies. Dwiwahjono affirmed that the food and beverage industry played a paramount role in the non-oil and gas manufacturing industry that contributed over one-third, or 36.49 percent of the gross domestic product (GDP) in the sector in the third quarter of 2019. An increase in the industry would significantly impact the national GDP. The food and beverage industry sector had clocked a growth of 7.72 percent until the third quarter of 2019 (c-to-c), surpassing the 4.48-percent growth of the non-oil and gas industry and the total economic growth of 5.04 percent. "I am optimistic that this exhibition would run smoothly and successfully and bring a positive impact on development of the food and beverage industry in Indonesia," he added. 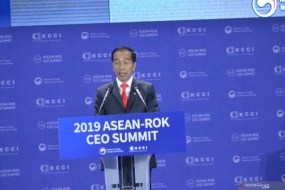 President Joko Widodo (Jokowi) has drawn focus to three steps deemed necessary for ASEAN member countries and Korea to face global recession and challenges that lie ahead. "The global economic recession could destroy the global economic and financial system and create a sense of distrust toward world economic institutions," Jokowi stated while speaking at the ASEAN-Republic of Korea (ASEAN-RoK) CEO Summit in Busan, South Korea, on Monday. He expressed optimism that ASEAN member countries and South Korea would be adept at facing the challenges and making breakthroughs to stall a further plunge in the regional economy. The president noted that the first of the three steps prioritized quality infrastructure development. "Indonesia will organize an infrastructure and connectivity forum for the Indo-Pacific region. I invite all business players to grab infrastructure and connectivity (projects) in Indonesia and the Indo- Pacific region," he stated.

Indonesia will also focus on streamlining regulations to attract investors through the revision of 74 laws viewed as posing a hindrance to investment. "We will soon revise 74 laws that could hinder investment. I have ordered that it should be completed in the near future," he explained. The second step seeks to bring about an improvement in the quality of human resources deemed paramount for a country to make a notable economic leap. "To this end, revitalizing education to create a link and match between education and the work place is a must," he stated. Jokowi expounded that the third step pertained to renewable energy development. "The ASEAN and Korea must champion the development of renewable energy in the region," he remarked. Indonesia has obligated to use the 20-percent biodiesel blend B20. "Next year, we will meet the obligation to use the 30-percent biodiesel blend B30," he stated. Furthermore, Indonesia will construct hydropower plants to drive large-scale electricity generation, especially in North Kalimantan and Papua provinces. "The development of this renewable energy will produce low emission. This is our commitment to the Paris Agreement," he added.//antara