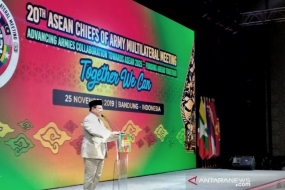 Indonesian Defence Minister Prabowo Subianto has appealed to the Association of Southeast Asian Nations (ASEAN) member states to exert combined efforts to tackle terrorism. Terrorism poses a threat to state security, and every nation must remain alert to the threat, he remarked while opening the 20th ASEAN Chiefs of Army Multilateral Meeting (ACAMM) in Bandung, the capital of West Java Province, on Monday. "I have pinned high hopes for sound communication among ASEAN member states in the event of a terrorism threat," he informed military delegations from ASEAN member states. He highlighted three terrorism-induced threats to ASEAN member states in the form of transnational crimes, radicalism, and terrorism. "Regardless of whether we come to the realization and we like it, a dynamic movement exists that threatens ASEAN member states," he stated. For its part, the former commandant general of the Army's special elite troops (Kopassus) appealed to all countries to establish coordination to thwart the ideology. "Hence, the meeting is hoped to pave the way for sound cooperation among ASEAN member states," he stated. Furthermore, he is upbeat about ASEAN member states establishing sound cooperation as part of the efforts to create peace among all nations in the world. "This is for the sake of strong sovereignty in each ASEAN member state to facilitate continued progress and development in future," he added.//antara 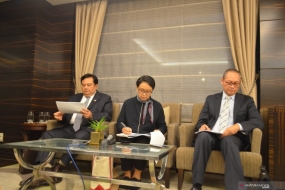 Indonesian Ambassador to South Korea Umar Hadi pointed to an increase in bilateral trade between Indonesia and South Korea over the past five years. "According to the latest figure, it reached a total of US$20 billion in 2018, comprising our exports worth around US$11 billion and our imports of some US$9 billion. We enjoyed a surplus of US$2 billion," he remarked while accompanying Indonesian Foreign Affairs Minister Retno Marsudi during a press conference in Busan, South Korea, on Sunday evening. The Indonesia-South Korea trade performance was productive since both countries traded complementary commodities. Indonesia's products, with potential to penetrate South Korean markets, comprised timber products, food, beverages, processed seafood products, automotive components, and electrical products. "Hence, we still have opportunities to offer more," he remarked. South Korean companies have invested in Indonesia in textile, garment, and footwear industries, among others. "If we notice in Kerawang, Purwakarta, Bandung District, the garment factories belong to Korea. It is for export. Now, it begins to shift to Central Java, such as in Tegal, Kendal, and Semarang," he noted. South Korea has also begun entering major industries, such as petrochemicals. Lotte Chemical, for instance, last year, conducted a groundbreaking ceremony for investment worth US$4.3 billion. Korea has also invested in infrastructure, such as power plants in East Java, Cirebon, and West Java, he remarked. Minister Marsudi affirmed that most of Korea's investment in Indonesia was in the manufacturing sector. "In investment, South Korean investors in Indonesia ranked sixth last year and majority in manufacture," she added. She believed that South Korea is one of the very potential business partners since the country has been actively investing in Indonesia and the ASEAN. "Recently, to be exact in 2017, South Korea issued a policy called the 'New Southern Policy' paying bigger attention to ASEAN," she remarked. About a decade ago, the South Korea and ASEAN trade ranked fifth. "However now, ASEAN is the second-largest partner, after China," she added.//antara 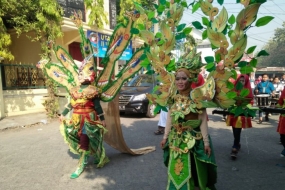 Some 2,000 scout members joined a carnival of recycled costumes in Jakarta's MH Thamrin street during car-free day on Sunday. They are members of the Bakti Camp Unit for Scouting Works by Saka Kalpataru, Saka Wanabakti (Pertikawan) and the National Movement for Watershed Conservation (GNPDAS) Jakarta Pertikawan Festival. "The cultural carnival with costumes made from waste, take on the theme of biodiversity (flora and fauna). This is the first time it was held. It is in line with President Joko Widodo's mandate," said Secretary General of the Ministry of Environment and Forestry, Bambang Hendroyono, in a press statement received in Jakarta, Sunday. He said that the carnival is an innovative movement to motivate young scout members to care more about the environment and the sustainability of watersheds. He hoped for the young members to become pioneers in activities for the environment in their quarters. Deputy Chairperson of the National Quarter Scout Movement Kingkin Suroso said Saka Wanabakti and Saka Kalpataru are forums for fostering enforcement and Pandega scouts who had an interest in science and technology, as well as entrepreneurship in the utilization and preservation of natural resources in forestry and the environment. "This Pertikawan activity is a vehicle for applying and providing skills for members of Saka Wanabakti and Saka Kalpataru," he said. 200 participants wore costumes from recycled materials that were artistically designed to represent Indonesia's cultural richness and biodiversity in the carnival. A number of figures from the young generation also wore festival costumes made from recycled materials, including a diver who was also one of the 100 most influential women in the world, according to the BBC, Swietenia Puspa Lestari, Miss Cultural Indonesia 2019 Sonia Fergina Citra, and Binus Ambassador 2019 Reymond Leopard. The participants started the carnival in front of the Election Supervisory Body building (Bawaslu) and ended at the National Monument (Monas) field. The event was themed "Tailoring the Archipelago with Recycled Materials" and was held by the Ministry of Environment and Forestry, in collaboration with the National Quarter of the Scout Movement.//antara 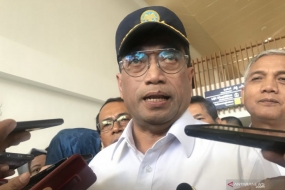 Minister of Transportation Budi Karya Sumadi stated he has intensified coordination and divided roles with related stakeholders in anticipating the spike in the number of vehicles and passengers of public transportation during the 2019 Christmas and 2020 New Years holiday season. "We have gathered all stakeholders and divided our roles. The Ministry of Public Works and Public Housing will prepare the roads, the Police force prepares their own team and we will do our part as well. Insya Allah (God willing), this will go on smoothly," said the Minister in his statement received In Jakarta, Monday. The Minister said that the Police Force's Traffic unit will coordinate down on the streets, much like the Eid holiday season. He predicted that during the Christmas and New Year period, the spike of vehicle numbers would not be as significant as the Eid holidays, and that the crowd would be more concentrated in tourism destination areas. "The prediction is that during the New Year holidays, it would not be as packed as Eid, so usually there would be a lot of people in tourist attractions. People would want to go to Bali, Jogja, more than those returning home. So we have taken certain measures in some places to ensure security," he said. In addition, he also said there will be appropriation of passenger ship fees around 10-15 percent. "Theoretically, the increase should have been at 50 percent, but the government is doing it gradually. We stay at 10-15 percent in order to help them (operators) maintain good services," he said. He further said that at the moment, there are a number of operators that is looking to stop operating as the could not cover the fees.//ANTARA