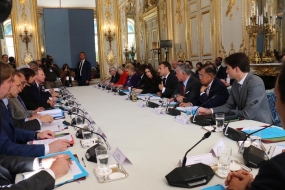 On the sidelines of the Global Platform for Disaster Risk Reduction (GPDRR) Meeting in Geneva, Switzerland, the Indonesian Vice President, Jusuf Kalla, who was accompanied by Indonesian Deputy Minister of Foreign Affairs, AM Fachir, met the invitation of the French President and New Zealand Prime Minister to attend the Meeting Christchurch Call for Action in Paris, France (15/5).

The Vice President in his statement expressed the importance of three things, first building community resilience and solidarity with the ideology of extremism, including Islamophobia, through interfaith dialogue and empowering youth as agents of peace. Second, improving the governance of the internet by the government through regulations and law enforcement by involving the role of the private sector in its implementation. Third, encourage Public and Private Partnerships, through various innovations, such as the application of code of conduct, encouraging supervision, regulation and independent cyber patrol.

Vice President Kalla also stressed that the government and the entire information technology industry bear joint responsibility in making the internet world safer and healthier for all.

The meeting in Paris aims to build global cooperation between the government and internet service providers to prevent internet abuse by terrorist and extremist groups. One of them is eradicating online content related to terrorism and violent extremism and preventing further dissemination by internet users such as the Christchurch tragedy.

Also present at the meeting were Heads of State and Governments such as the King of Jordan, Senegal's President, British PM, Canadian PM, Irish PM, Norwegian PM and European Commission President and CEOs of international internet-based media. The meeting agreed on the Christchurch Call for Action document which contains the government's voluntary commitment from the business sector to make a joint response in overcoming the content of online terrorism. The document also encourages a balanced approach where the joint response continues to prioritize human rights including freedom of opinion and maintain the role and positive contribution of the internet for the purpose of peace and prosperity. (kemenlu) 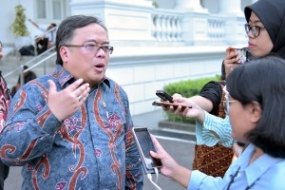 "Why? Because of mismatch. The mismatch is not a field mismatch, but an expertise mismatch, "Bambang said in response to reporters after attending the Limited Meeting on Education, at Merdeka Palace, Jakarta, Thursday (5/16) afternoon.

When asked by reporters whether it meant that there would be evaluations in Vocational High Schools, BLK and Polytechnics, the PPN Minister / Head of the National Development Planning Agency said the Minister of Education and Culture, Menristekdikti, Minister of Manpower were asked to see what they were like.

According to Bambang, they had explained before, there are SMKs that are not qualified, of all kinds. The problem now, continued the Minister of Bappenas, is that the Government cannot start from zero, so it must take advantage of the existing ones.

"Well, this is not a matter of numbers, teacher ratios, all kinds, but the problem of compatibility of skills and graduation skills with those needed by the labor market. So, the supply side must hear the demand side, "Bambang said.

The Minister of PPN / Head of Bappenas admitted, if there were already clusters in SMKs such as tourism, industry, maritime affairs and all kinds. But he stressed, maybe the field was appropriate, but not the problem of expertise yet.

Minister of PPN / Head of Bappenas is reluctant to answer the question of how bad the current SMK is. He reminded the fact that there were vacancies, those who applied for smaller jobs, what worked more. "That shows the level of expertise is not suitable. Maybe the field but expertise is not, it must be pursued, "he said firmly.

Therefore, Bambang continued, there was a need to improve quality in the education sector, including the quality of teacher improvements. (setkab) In an effort to develop areas surrounding Suramadu Bridge, East Java provincial government has announced plan to build an integrated Islamic area called Islamic Science Park at the foot of the bridge.

“The park requires 101 hectares of land in which 20 percent of the plot of land will be developed for educational purposes, 30 percent for art purposes, and 50 percent for entertainment purposes,” East Java  Governor Khofifah Indar Parawansa said in a Coordinating Meeting on the Suramadu Area Development Agency (BPWS) at the office of the Coordinating Ministry for the Economy, Jakarta, Tuesday (14/5).

The park – which is set to be Indonesia’s first Islamic theme park – will be developed by East Java provincial government in collaboration with the developer of Jatim Park, one of the most famous theme parks in the province.

A center for halal food and an augmented reality museum which portrays the story of Wali Songo or nine propagators of Islam in Java will also be built inside the park.

“We will also develop a kris (traditional Javanese dagger) village and batik village which can represent cultural heritage of Madura to the world. We hope Indonesia in general and Madura in particular can become an international tourist destination for Muslim travellers,” Khofifah said, adding that the Maduranese community can welcome new industries in the region as long as it will strengthen Madura’s image as a religious region.

The Governor went on to say that the island of Madura is not only known as a salt producer, but also has large sugar plantations. However, sugar factories have yet to be built in that region. Thus, the Governor expressed hope that the factories will be built immediately.

“I have met with a number of prominent figures in Madura who have recommended me to develop sugar cane factories,” she said.

Coordinating Minister for the Economy Darmin Nasution and Minister of Public Works and Public Housing Basuki Hadimuljono have approved to the plan to build the park and sugar cane factories as concrete efforts to develop areas surrounding the Suramadu Bridge.

Nevertheless, East Java Governor has been asked to propose regents and/or heads of local office in the province to join the BPWS. Darmin also suggested involving ulema (Islamic leaders) and prominent figures in Madura as BPWS’s Board of Advisors. (Coordinating Ministry for the Economy PR/ES) 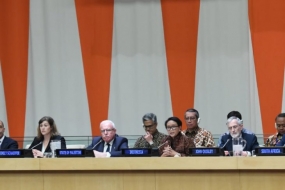 The Indonesia government highlighted the theme because of Indonesia’s commitment to the importance of the work of the peacekeepers. The Indonesian government said it believed that adequate preparations would greatly help the success of UN peacekeepers, Director General for Multilateral Affairs of the Foreign Affairs Ministry Febrian Ruddyard said.

He noted that the discussion about peacekeepers is in line with their superior record and the involvement of Indonesian peacekeepers. Indonesia ranked eighth among the 124 largest countries that contribute peacekeepers, with 3,000 personnel involved in various United Nations missions.

"Many countries do not yet match Indonesia's contribution. Obtaining 3,000 personnel is difficult, especially finding those of good quality, since peacekeepers undergo thorough training and many tests, he stated.

The blue beret corps are peacekeepers who are mandated by the United Nations to protect millions of people in war and conflict areas throughout the world. Meanwhile, peacekeepers remain a source of multilateral collaboration, in an effort to maintain peace.

However, peacekeepers face challenges due to political realities and world safety issues.

Also, safety and performance of peacekeepers are influenced by other factors. These factors include different conflict types, a lack of commitment for political solutions, inadequate preparation, involvement of transnational actors, including terrorists and foreign terrorist fighters (FTF). In fact, peacekeepers are needed to maintain world peace.

"We must remember that peacekeepers represent the UN security council. Thus, our support to peacekeepers should be in line with current challenges and conflicts," the minister said. (ant)