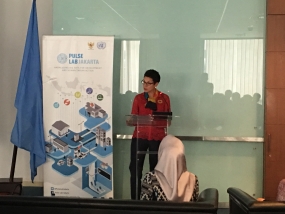 United Nations Expects Use of Data for Responsible Disaster Management

The Assistant Secretary General of the United Nations for Humanitarian Affairs Ursula Mueller on Tuesday in Jakarta appreciated the launch of the National Disaster Logistics Planning Information Platform conducted by Pulse Lab Jakarta. According to her, the launch of this platform has high potential in providing opportunities for authorities to handle natural disasters in determining the right steps in disaster management. Nevertheless, Ursula reminded the importance of maintaining the confidentiality of community data. By utilizing technological advancements, the National Disaster Logistics Planning Information Platform can provide large amounts of information that can be used in disaster management. Ursula hopes that the use of this platform can also ensure the confidentiality of the data used.

"With new capacities, also come new responsibilities. And at the same time as we, as obtained the many ways in which data and new technologies can be used, we need to ensure that data is managed responsibly and in a safe way. We must ensure data is accessed and used in ways that respect the right to confidentiality and privacy of all citizens, said Ursula Mueller.

Furthermore, Ursula Mueller who is also the Deputy Coordinator of the United Nations Office of Emergency Assistance for the Coordination of Humanitarian Affairs said that all parties responsible for handling natural disasters need accurate, up-to-date and easily accessible data. According to her, the use of this platform will not only facilitate the handling of natural disasters, but can also be used for planning the development of affected areas after the disaster. (VOI / NDY / AHM) 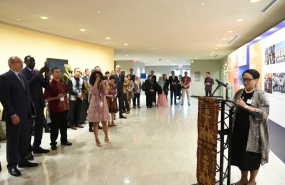 The second week in May marked the beginning of Indonesia's busyness in taking responsibility as the President of the United Nations Security Council (UNSC). May 2019 is the first time for Indonesia sitting in the UN Security Council presidency. In its presicdency, Indonesia has prepared various work programs and major events, including the Photography Exhibition themed "Sowing the Seeds of Peace".

Retno explained, for Indonesia, peace is not only about war, but also includes freedom of democracy, human rights and development. According to Retno, the photo exhibition was also considered to be the right media to remind the world community of what Indonesia had done to maintain peace.

“The world knows that we have contributed a lot, but, if then our contribution is put in a picture or film, then people will remember. For example, like the Palestinian ambassador when he saw an Indonesian hospital in Gaza. He immediately remembered "Oh yes, this is a hospital that has been built by Indonesia,” Retni Marsudi said.

As a permanent member or the Elected 10 of the UN Security Council, Indonesia should be proud, because currently it occupies the 8th position out of 124 countries contributing to the Peace Forces in various conflict areas. Meanwhile, the photo exhibition, which is a series of the Indonesian Presidency at the UNSC, documented Indonesia's contribution to world peace, including democracy and peace building, the role of women as agents of change and peace and development cooperation. (KBRN / Retno / AHM) Deputy Foreign Minister Fachir stressed the need to be encouraged by the interaction of Indonesian and Norwegian business circles to increase the value of trade and investment which is still below the economic potential of the two countries. Both Vice Minister Fachir and Hagen also agreed that a comprehensive economic cooperation agreement between Indonesia and EFTA countries (Iceland, Liechtenstein, Norway and Switzerland), or what is known as IE-CEPA, became an important instrument to encourage economic relations and cooperation between the two countries . Both Vice Ministers hope that the ratification process in each country can be completed as soon as possible.

The Minister of Foreign Affairs of Hagen congratulated Indonesia on the success of the General Election simultaneously in April 2019. Simultaneous elections in Indonesia are seen as one of the elections with the most complex process, but can be held relatively well, becoming evidence of Indonesia as a champion of democracy. (source: Directorate of Europe II, Indonesian Ministry of Foreign Affairs) The Pacific Exposition trade, investment and tourism exhibition initiated by the Indonesian government is aimed at opening market access for superior products in Indonesia and countries in the Pacific region.

Through an exhibition held in Auckland, New Zealand, from July 11-14, 2019, Indonesia wants to increase its presence and influence in the Pacific.

According to the Indonesian Ambassador to New Zealand, Tantowi Yahya, Indonesia is geographically an integral part of the Pacific community because its five provinces are located in the Pacific Ocean.

Indonesia's population also consists of the Melanesian races in Papua, West Papua, and East Nusa Tenggara, as well as the Polynesian races in Maluku and North Maluku.

Indonesia's presence in the Pacific will expand the market in this region which has a population of 30 million and 1.2 trillion US dollars of GDP.

"We want to provide something different, not help, but open market access. With a population of 260 million, Indonesia can become an easy market for Pacific countries that have excellence in agricultural, fishery and tourism products," Tantowi said.

Indonesia's efforts to capitalize on its geographical location and socio-cultural closeness with the Pacific countries are being made in the midst of the Pacific Reset policy pioneered by Australia and New Zealand to embrace Pacific countries through economic cooperation, increased human resources, and the involvement of a passive society in the world.

However, Tantowi said that Indonesia did not want to compete with the two countries, even with the United States and China, which were also expanding their influence in the Pacific.

"There is no political motive behind the implementation of the Pacific Exposition, unless we want to play a role and contribute in the Pacific," he said.

Through these activities, all countries in the Pacific region including Indonesia and Timor Leste are given the opportunity to showcase superior products and investment potential.

On the sidelines of the exhibition, a number of tourism, trade and cultural forums will be held, as well as business matching events to further the interests of all participating countries.

The tourism forum with the theme "Towards One Single Pacific Destination" is intended to integrate countries in the South Pacific into new tourist destinations.

"This area is projected to become a new giant in the world of tourism," said Tantowi.

This Pacific Exposition supported by New Zealand and Australia will be an annual activity that is sustainable, to develop the interaction between Indonesia and the Pacific region. (ant)