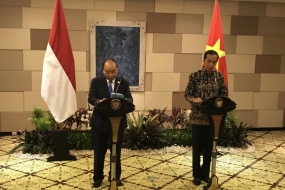 President Joko Widodo (Jokowi) has highlighted the importance of inclusiveness in the digital economic era in a meeting with the Asia-Pacific Economic Cooperation Business Advisory Council (ABAC).

At the meeting under the theme "Inclusion in the Age of Disruption: Charting a Common Future", President Jokowi discussed issues on trade, global economy and digital economy with Australian Prime Minister Scott Morrison, and Vietnamese Prime Minister Nguyen Xuan Phuc, according to a statement from the Deputy for Protocol, Press and Media of the Presidential Secretariat, Bey Machmudin, received on Sunday.

The meeting which took place at the APEC Haus on Saturday (Nov 17) was also attended by ABAC representatives from all four countries and moderated by Richard Cantor from the United States. The Chair of ABAC Indonesia Anindya Bakrie, was present at the meeting,

Indonesia is estimated to be the largest digital economy in Southeast Asia by 2020.

As an illustration, President Jokowi explained that in 2017 Indonesia had 132.7 million internet users and 92 million smart phone users.

With this big number of the technology users, the government continuous to complete the construction of digital infrastructure by adding Palapa Ring optical fiber length and widening the frequency spectrum to provide affordable digital access for people.

In addition, Indonesia will implement the E-Commerce Policy Roadmap to support e-commerce development by 17 percent and generate 1,000 technopreneurs in 2020.

President Jokowi explained that Indonesia pays great attention to the younger generation to help them face the challenges in the Technology Revolution 4.0 by promoting vocational education, polytechnics, and vocational training centers.

The government supports the use of technology in all sectors, including online application in education, Ruangguru, and GoJek which is engaged in the transportation sector.

"All these efforts are made to encourage an inclusive economy," President Jokowi said.

The president reminded that digital inequality should be overcome through formulating an internet of things roadmap, providing digital marketing platforms for micro, small and medium enterprises (MSMEs) such as Tokopedia and Qlapa.

He also said digital technologies should be used by those live in remote areas through collaboration with online marketplaces in developing e-commerce platforms to market local potentials such as agriculture and fisheries.

The government should improve school curricula to be more prepared to welcome the digital era.

"In this digital era, let`s not forget the inclusiveness aspect so the benefits can be enjoyed by everyone. Ignoring inclusiveness might widen the social gap which could create social problems and conflicts," President Jokowi said.

At the end of the dialogue, President Jokowi warned that tensions among major countries in the trade world would only harm people.

"And this could also result in social conflicts," the president added. (ANTARA) 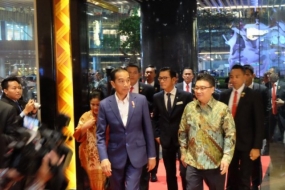 From the airport the President and entourage went directly to the hotel before making a working visit on Monday.

Presidential aircraft Indonesia-1 that carried the President and the First Lady left Jackson International Airport in Port Moresby at 5.03pm. 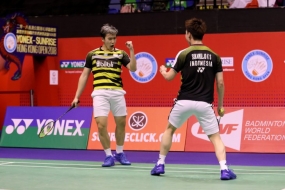 Playing with strong smashes and strong defense Kevin and Marcus made their Japanese opponents unable to develop their play and finished the first game in their favor 21-13.

In the second game they maintained their tactic with Marcus launching smashes from the back while Kevin was always ready stopping the shuttlecock that came to put over the net softly.

Kevin and Marcus went to the final round after defeating their fellow countrymen - Hendra Setiawan/Mohammaf Ahsan in the semifinal round 21-14, 18-21, 21-9.

Kamura and Sonoda proceeded to the final round after beating Fajar Alfian and Muhammad Rian from Indonesia 24-22, 21-15 in the semifinal round. (ANTARA) 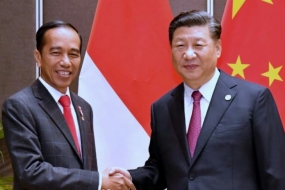 President Joko Widodo met with the President of the People`s Republic of China (PRC) Xi Jinping and discussed trade to the digital economy in a bilateral meeting held on the sidelines of the APEC Summit.

The Deputy of Protocol, Press and Media of the Presidential Secretariat, Bey Machmudin, in a statement received in Jakarta on Saturday, said that the meeting was held at the Stanley Hotel, Port Moresby, Saturday evening.

Starting the meeting, President Jokowi congratulated President Xi Jinping for the success of the PRC in holding an international export exhibition in Shanghai which took place recently.

"I would like to congratulate you on the holding of The 1st China International Import Export Expo in Shanghai recently, where Indonesia became the `Country of Honor`," said President Jokowi.

In addition, President Jokowi also appreciated the PRC for expressing sympathy and cooperation given in handling natural disasters in Lombok and Central Sulawesi.

The two heads of state then discussed several matters related to the relations between the two countries. In the trade sector, the President hopes that the two countries can work together to overcome the Indonesia-China trade deficit through various means.

These methods include the ease of export of tropical fruit from Indonesia to China, such as fresh pineapple, dragon fruit, avocado, rambutan, mango, banana and durian.

"The ease of import of swallow nests from Indonesia," he continued.

The President also hopes for the sustainability of palm oil exports and derivative products, including cooperation in developing biodiesel such as B5, B20 biofuels and replanting oil palm.

In addition, President Jokowi wants China to not apply a quota or anti-dumping for Indonesian manufactured products such as steel.

"I also hope that His Majesty can encourage Chinese tourists to visit Indonesia, especially to Bali and 10 new Bali," he added.

The two Heads of State also discussed cooperation in the investment sector, including to develop industry 4.0.