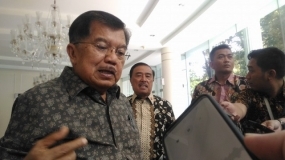 Trade war between the United States and China causes a number of countries to be affected by higher export duties, falling demand for production, and a growing number of cross-border trade activities. In response, Vice President Jusuf Kalla said that Indonesia would continue to implement an open trade policy with other countries, and would strengthen cooperation with European Union -EU member states. Indonesia will remind the EU that Indonesia is one of the biggest purchasers of Airbus from Europe. Therefore, the Vice President asked the EU not to discriminate on trade matters.

“This means that we remind Europe that we’ve bought many products, including the biggest buyers of Airbus for example by Lion, by Garuda and others. Therefore, they must not discriminate us, because we can also take the same policy; do not discriminate!,” said Jusuf Kalla.

Vice President Jusuf Kalla added that Indonesia needs to make an agreement with the EU to face the world trade war. One anther is interdependent on the needs of technology, livestock production, and spice. Thus, VP Jusuf Kalla affirmed that the government of Indonesia will take the path of negotiations. In the negotiations that have been taken, there are conditions that are difficult to meet both the demand from the government of Indonesia and the state requests that involved cooperation. (KBRN/Rizki/Trans by Rezha) 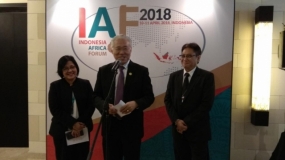 The total trade value achieved during the implementation of Indonesia-Africa Forum 2018 –IAF reached transaction worth more than $2 billion dollars. This was stated by Minister of Trade, Enggartiasto Lukita at the closing of the forum which was attended by 575 delegates from 47 countries. Earlier, it was reported that on the first day of this forum, Indonesia and African countries had signed a business agreement with a value worth $586 million dollars. This amount increased on the second day. According to Minister Enggartiasto Lukita, on the second day of the implementation of Forum Africa 2018, there was a direct business transaction with a value reaching $499 million dollars. This amount does not include the potential value of existing business development, which may reach $1.3 billion dollars.

In addition, Minister Enggartiasto Lukita added that during the implementation of the IAF 2018 , the government of Indonesia along with the government of Mozambique has launched a preliminary discussion for the establishment of Preferential Trade Agreement between the two countries. According to Minister Lukita, this will encourage the increased economic cooperation between the two parties as well as a liaison for the expansion of economic cooperation with the surrounding countries. Minister Enggartiasto Lukita also stated that the implementation of the IAF 2018 has shown real achievement. (VOI/Ndy/Trans by Rezha) 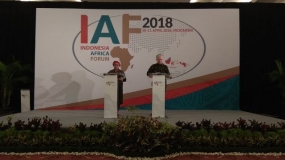 The government of Indonesia is targeting to have Honorary Consuls across the countries on African continent this year. This was affirmed by Minister of Foreign Affairs, Retno Marsudi after giving directions to several Indonesian Ambassadors to African countries in Nusa Dua, Bali, on Wednesday (April 11th). She also said that the Indonesian government considers important representation in all countries in Africa. Therefore, the Minister asked the Ambassadors to be able to submit the names of Honorary Consul candidates for the next six months. The Honorary Consuls, according to Minister Retno, play a major role, not only to enhance the cooperation of friendly countries with Indonesia, but also to protect Indonesian citizens in their respective countries.

“Thus to optimize, we plan at least at the end of this year in the majority or all. But, at least, we have already had an honorary consul at important regions in African countries. With that honorary consul, we at least have eyes and ears in the field. In addition to economic affairs, of course, this honorary consul will be very useful for the protection of Indonesian citizens. Because more recently, many Indonesian citizens have been facing problems in African countries, including our crew. If we have an honorary consul, it will be easier for us to respond immediately if there is a problem. Therefore, I have given the target that in 3-4 or the longest 6 months, of course, we have to find the right persons to become consuls of honor,” said Retno Marsudi.

In addition, in her meeting with Indonesian Ambassadors to African countries, Minister Retno Marsudi also explained that the Indonesian government has assigned special task force to the Indonesian Ambassadors in Africa to focus on improving economic cooperation between Indonesia and African countries. Minister Retno emphasized that it’s important for the Ambassadors to follow-up the results of the meetings of all series of Indonesia-Africa Forum 2018, after they return to the respective country where they are on duty. (VOI/Ndy/Trans by Rezha) 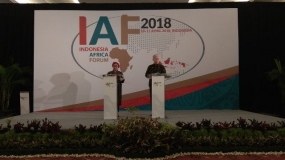 The Indonesian government will initiate more cooperation forums between Indonesia and Africa to discover Indonesian potential in a bid to boost economic cooperation between Indonesian and African countries. This was stated by Minister of Foreign Affairs, Retno Marsudi at the closing of the Indonesia-Africa Forum 2018 in Nusa Dua, Bali on Wednesday (April 11th). In addition, according to Minister Retno, Indonesia will step up consolidation with African countries by setting up a task force for Africa. This task force is to map out policies related to infrastructure development in Africa. Minister Retno further stated that Indonesia and Africa also agreed to enhance financial financing cooperation. In this regard, Minister Retno hopes that the scale and reach of the funding sector through National Interest Account can be expanded for African countries.

“First, Indonesia will initiate more forums both at the government level and at the business level to find, match, and share experience on policy and interests in business. Second, it is effective that we want to consolidate our engagement with Africa by establishing a task force on Indonesian Infrastructure to Africa. Or, we call the task force to Africa. This task force will consist of various ministries or agencies as well as private sectors whose task is to map out and implement infrastructure-related policies with Africa. Third, Indonesia and Africa agreed to improve financing,” said Retno Marsudi.

In addition to these three points, Minister Retno Marsudi also mentioned that during the implementation of Indonesia-Africa  Forum 2018 in Nusa Dua, Bali, Indonesia has also succeeded in initiating the establishment of trade agreement in the form of Preferential Trade Agreement with a number of African countries. This is aimed to open the door of cooperation between Indonesia and Africa. (VOI/Ndy/Trans by Rezha)