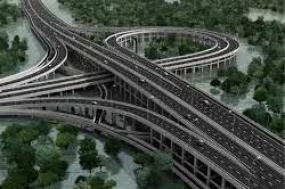 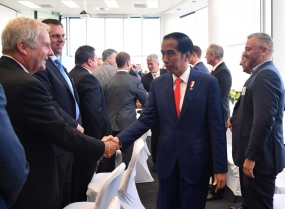 President Joko Widodo (Jokowi) promoted Indonesia`s digital economy during a meeting with New Zealand businessmen and CEOs at the Majestic Centre of Wellington, on Monday ( 19 March ). Bey Machmudin, head of the presidential press bureau, noted in a statement received by ANTARA on Monday that the President revealed that the Indonesian economy is currently transforming following the rise of the digital economy and the increasing number of middle-class people. The country no longer depends on the export of raw commodities, he added."In order to support the economic transformation, the government is serious in realizing the fundamental economic reform," Jokowi stated.As a result, Indonesia`s ranking in ease of doing business index has increased from 120th in 2014 to 72nd in 2018, according to a survey conducted by the World Bank."It increased by 48 points only in four years," the President pointed out.Indonesia has also received the predicate of Investment Grade from three world rating agencies, namely the "Standard and Poor", "Moodys" and "Fitch". The country`s economy grows more than 5 percent per year, indicating double growth every 14 years."Our economy is currently transforming with the emerging e-commerce. Based on our data, around US$2 billion to US$3 billion per year is invested in the e-commerce," President Jokowi revealed.New Zealand is ranked first in terms of ease of doing business according to the World Bank survey for two consecutive years. Therefore, President Jokowi expects Indonesia to follow New Zealand`s steps by gaining experiences from its businessmen and officials.The President specifically instructed the Investment Coordinating Board (BKPM) head Thomas Lembong to gather experiences and knowledge from other countries to achieve Indonesia`s target of becoming top 40 countries in the World Bank`s Ease of Doing Business Index by the end of next year. ( antara ) 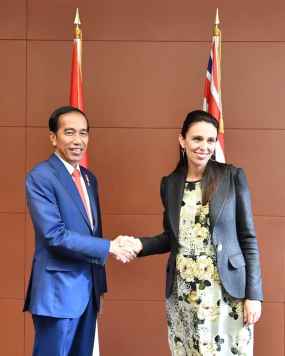 Indonesia and NZ to Increase Trade and Investment

Indonesian President Joko Widodo (Jokowi) and New Zealand`s Prime Minister Jacinda Ardem discussed economic cooperation improvement in a meeting at the Parliament Building in Wellington on Monday. According to a press release from the deputy for protocol, press and media of the Presidential Secretariat, Bey Machmudin, improving economic cooperation was important for the two countries. As open economies, Indonesia and New Zealand signaled trade and investment relations could be built to produce mutually beneficial relations."Trade relations are not zero-sum game. therefore let us try to settle the Regional Comprehensive Economic Partnership (RCEP)," President Joko Widodo said.With regard to bilateral trade the two countries have set a target of reaching four billion New Zealand dollars by 2024 and so the two countries need to work hard to achieve it. President Joko Widodo in particular praised the New Zealand market that has accepted prime commodities of Indonesia such as coffee, mangosteen and zallaca. Indonesia hopes more commodities such as manggo, banana and pine apple would also be accepted.President Joko Widodo called for attention to export of animal feed from waste of palm oil that has now been environmentally questioned. He also emphasized the importance of continuing efforts in managing oil palm plantation sustainably in Indonesia, adding that the country also has an interest to assure it is being done.`Oil palm plantations involve 17 million people or three times the population of New Zealand. Half of the plantations belong to smallholders. Sustainability must be assured in line with the issue of small farmers` right to prosperity," he said.With regard to tourism President Joko Widodi has urged for increasing air connectivity between the two countries."I wish to encourage increased air connectivity to boost tourist arrivals by increasing flight frequency between Auckland and Bali this year from three to five times," he said.On geothermal energy development President Joko Widodo wished cooperation could be increased to investment cooperation. President Joko Widodo raised the same issue when he met with the governor and opposition party chief Simon Bridges."I hope geothermal cooperation could be improved to an investment cooperation and not only training," he said.Prime Minister Arden conveyed New Zealand`s commitment to extend NZD4.5 million for three years to the Indonesia Red Cross for the disaster response cooperation and NZD3.5 million for the development of leadership for youths in Indonesia especially those in the eastern region.President Joko Widodo hailed the signing of a memorandum of understanding between Kalbe Farma and two New Zealand companies.The MOU covers cooperation with Fonters in the development of nutrition product quality and cooperation in raw materials supply guarantee for nutritional products with Westland Milk Products.At the start if the meeting Prime Minister Arden expressed appreciation to Indonesia for the partnership that has been built so far bilaterally and in the context of ASEAN. President Joko Widodo was in New Zealand for a state visit done in concurrence with the 60th anniversary of diplomatic relations between the two countries. The visit was also made to return the visit of the New Zealand prime minister to Indonesia before."For the past 13 years no Indonesian president has visited New Zealand and it is time now for Indonesian president to visit to return the visit made the New Zealand prime minister before," he said.Besides discussing economy the two leaders also discussed regional and international issues such as the development of the Korean Peninsula issue and situation in South China Sea and Rakhine State.President Joko Widodo met with opposition leader Simon Brudges after meeting with Prime minister Arden.Before leaving the Parliament Building President Joko Widodo greeted Indonesian citizens who had been waiting to see him outside the building and had his picture taken with them.

At the Indonesia-New Zealand Business Forum in Auckland on March 16-18 the Indonesian business delegation promoted coffee, palm oil, renewable energy and employment service to buyers. A total of USD 9.7 million was collected from sales of Indonesian products at the event, of which USD6 million from coffee products. President Joko Widodo personally promoted Indonesian coffee before the New Zealand governor general, prime minister and cabinet ministers during lunch at Government House. (antara ) 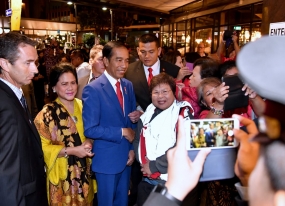 President Joko Widodo (Jokowi) arrived in New Zealand on Sunday for a state visit from Australia where he had earlier attended an ASEAN-Australia Special Summit. Deputy for protocol, press and media Bey Machmudin said in a statement President Jokowi and entourage departed from Australia`s Kingsford-Smith International Airport in Sydney at 17.37 hours local time or 13.37 hours West Indonesia Time.New Zealand`s finance and also sports minister Grant Robertson, Indonesian Ambassador to New Zealand Tantowi Yahya and New Zealand`s Ambassador to Indonesia Trevor Mathedon welcomed their arrival.President Jokowi and First Lady Iriana immediately proceeded to the hotel in Wellington where they would stay during the visit where hundreds of Indonesian citizens had been there to welcome them. The visit is a state visit to mark the commemoration of the 60th anniversary of the two countries` diolomatic relations.President Jokowi would meet with New Zealand`s prime minister and governor general as well as a number of CEOs in a budiness forum during the visit. On board the flght President Jokowi was accompanied by First Lady Iriana, coordinating minister for security, political and legal affairs Wiranto, minister/state secretary Pratikno, foreign minister Retno Marsudi and head of Capital Investment Coordinating Board Thomas Lembong. ( antara )