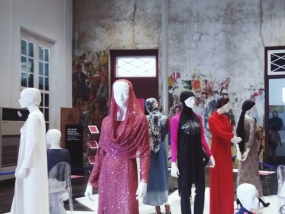 The Department of Tourism and Culture of DKI Jakarta in cooperation with the Australian Embassy organized "Faith Fashion Fusion: The Style of Muslim Women in Australia" exhibition. This is an exhibition celebrating the achievements of Australian Muslim women through fashion. The exhibition highlights the diversity and creativity of the Muslim community in Australia and how to express their beliefs through fashion.

“The First exhibition in Australia in 2012 and it's to all around Australia different cities and towns, and then last year in Kuala Lumpur, an now here in Jakarta until the 18th of March. The exhibition is really about celebrating the achievement of muslim women in Australia and it does that why looking at how they express themselves and their faith through fashion,” First Secretary (Advocacy and Outreach) of the Australian Embassy to Indonesia, Lydia Trotten, during the exhibition at the Jakarta History Museum on Thursday (15/03).

Lydia added that Jakarta as the capital of Indonesia was chosen as the venue for the exhibition of Faith Fashion Fusion because Muslim fashion is now developing in Indonesia, so the designers from Australia and Indonesia can share their experiences how they develop the fashion industry in their respective countries. (VOI/EGI/AHM) 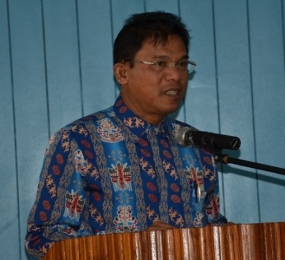 To celebrate Nyepi or Day of Silence or New Year's Day of Saka 2040 celebrated by Hindus, Indonesian Ministry of Religious Affairs of the Republic of Indonesia (RI) holds several social activities in various regions in Indonesia. The social activities are forms of government’s support to Hindus in celebrating Nyepi Day or New Year Saka 2040 which falls on March 17, 2018. This was conveyed by the Director General of Hindu Community Guidance of the Ministry of Religious Affairs, I Ketut Widnya in a special interview with Voice of Indonesia in Jakarta recently.

“The government certainly provides funding support to the committee, but in addition to the funds we also have some or at least four Nyepi activities. The most important is social activities. Yes, tree planting is done in Bogor, then the peak celebration is held at Prambanan temple, then mass yoga, and then seminar on Nationality, after the seminar on nationality then dharmashanti,” I Ketut Widnya said.

I Ketut Widnya stated Nyepi Day or New Year Saka 2040 this year is a special celebration because Nyepi Day or Day of Silence is celebrated together with Hari Raya Saraswati. The two major Hindu festivals celebrated on the same day are a historic phenomenon for Hindus in Indonesia. (VOI/Rezha/AHM) 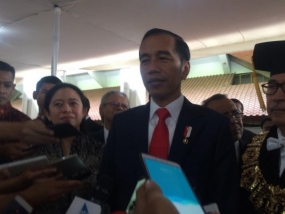 Indonesia Second Best Country for Investors Due to its Improving Trends

Indonesia is now included in the list of countries that are attractive for investment. President Joko Widodo revealed the results of the US News & World Report survey which puts Indonesia ranked second in the world's most attractive countries for investment. The Head of State disclosed that the criterion for the investment is the trend instead of the condition. This was said by President Joko Widodo when meeting with the leaders of commercial banks in Indonesia on Thursday (15/3/2018) at the State Palace of Jakarta.

"One thing I learned, it turns out that investors decide to invest into a country not because of the conditions in the country, but because of the trend in the country. What is more attractive to investors is investing in a country that may not be ideal, but the trend is definitely improving, knowing that the country continues to improve and fix certain things that are not ideal yet. What is more trusted by the International investors is because Indonesia’s trend is clear, the improvement is clear,” the president said.

The President believed that Indonesia would be trusted more by international investors because of the improved trend experienced in the country. The President also considered that the confidence of investing in Indonesia is also improving as seen from the Standard & Poor's Rating that returns Indonesia to investment grade or investment grade. Referring to the issue, the president asked Coordinating Minister for the Economic Affairs Darmin Nasution to improve the ranking of ease of doing business in Indonesia, which was stood at 72 last year. (KBRN/PRADIPTA/AHM) 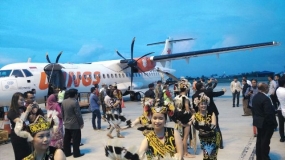 The opening of direct flights –Wings Air from Pontianak, West Kalimantan to Miri, Sarawak, Malaysia or vice versa may potentially increase tourist arrivals to Indonesia, both from Sarawak Malaysia and Brunei Darussalam. In his press conference at Miri International Airport on Thursday (March 15), Consul General of Indonesian Embassy in Kuching, Sarawak, Malaysia, Jahar Gultom said that in 2017, tourist arrivals from Sarawak to Indonesia, especially West Kalimantan have increased after several airlines opens a flight route from Sarawak to Indonesia without having to transit first in Kuala Lumpur, Malaysia.

“For West Kalimantan, in 2017, the tourist visits from Sarawak increased significantly, reaching more than 27 percent from 32,261 people in 2016 to 40,919 people in 2017. This is the highest tourist number recorded from Sarawak to West Kalimantan within 10 years. This 27percent growth was because more airlines have opened their routes from Pontianak to Sarawak and vice versa, such as Air Asia, Xpress Air, and now Wings Air,” Jahar Gultom said.

Jahar Gultom further said that with additional direct flight routes from Indonesia to Sarawak or vice versa, it is expected that cooperation of related stakeholders between Indonesia and Malaysia can be improved. One of them is by cooperating with travel bureaus and other business sectors such as plantation, wood processing and various other industries in Sarawak which may involve many workers from Indonesia. (VOI/Rezha/RHM)