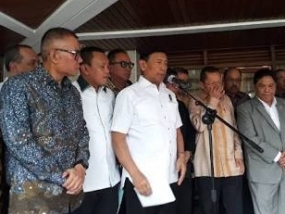 Government and House of Representatives to Accelerate Revision of Terrorism Act

Indonesian Coordinating Minister for Political, Legal, and Security Affairs, Wiranto on Monday (14/5) in Jakarta invited a number of chairman of the House of Representatives faction and Secretary General of political parties to agree on the acceleration of Law number 15/2003 on Combating Terrorism Crime which process has been running for two years at the House. Minister Wiranto also said that the acceleration effort is conducted to respond a number of terrorism actions which occurred in Surabaya and Sidoarjo, East Java recently. With the enactment of the Act revision, it is hoped terrorism combating process in Indonesia will be more effective. Because security apparatuses have strong legal protection to more firmly tackle the terrorists and to take action before the act of terrorism takes place.

“With the authority, and legal protection, the security apparatuses will not doubt to take preventive action, and earlier to solve the problem. There are terrorism indications that should be handled immediately,” Wiranto said

Minister Wiranto moreover added that the Law of combating terrorism will be legalized immediately, so that the overcome of terrorism case will no longer use the Regulation in Lieu of Law. Through the Law on Combating Terrorism, the government is expected to be able to conduct the handling and terrorism prevention overall. (VOI/REZHA/TRANS YATI/NITA) 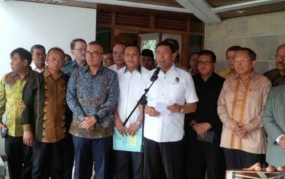 The People Asked to Calm down in Facing Terrorism Action

A series of bomb explosions which were allegedly conducted by terrorists in Surabaya and Sidoarjo, East Java have caused people’s unrest worries. Coordinating Minister for Political, Legal, and Security Affairs, Wiranto called on all people to remain calm down. Because security apparatus will increase efforts to capture all perpetrators who were involved and to prevent further acts of terrorism. This was stated by Wiranto after holding a meeting with chairman of the House of Representatives faction and Secretary Generals of political parties  to discuss revision of Law number 15/2003  on CombatingTerrorism Crime  in Jakarta, on Monday (14/5).

“With many terrorism attack, people are hoped remain calm down, to carry out daily activities safely. In this case, security apparatuses will increase protection, on people’s security and environment,” Wiranto said.

Furthermore, Minister Wiranto added currently the government and the House of Representatives are continuing to accelerate the legalization of the Law revision of Combating Terrorism Crime to increase the effectiveness of security forces in combating and preventing terrorism in Indonesia. However, the people’s participation is also needed to support performance of the security apparatuses. Therefore, the people are  also asked to keep alert and to oversee suspicious things that may lead to the terrorism acts in their surrounding area. (VOI/REZHA/TRANS YATI/NT) 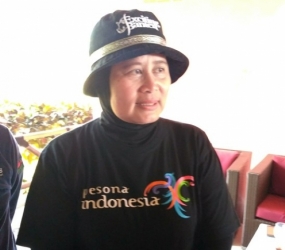 Banten has tried many ways to attract tourists. This was expressed by the Head of Banten Tourism Office, Eneng Nurcahyati on the sidelines of the launching of Rhino X Triathlon 2018 in Tanjung Lesung, Banten, Indonesia on Sunday (13/5). The Tourism agency is cooperating with some regencies and cities government of Banten to map out tourism potential in Banten. The digital market and Nomadic tourism are the two tourism potentials that will be developed by the Banten tourism agency.

“We also develop digital destination, digital market through the cooperation with GENPI (Wonderful Indonesia generation) which are available in Tangerang in Pasar Kampung Berkelir and Pandeglang in Pasar Kaulinan Menes in Menes regency. The digital destination and market are open every Sunday. The next chalange from the Indonesian Tourism Minister is Tanjung Lesung as one of the 10 new Bali should be developed Glam camp nomadic tourism, as well as caravan. It has been communicated with PT BWJ to know how about the asset of the company. Since PT BWJ is prepared to develop Glamcamp or caravan and also digital destination with the enchantment of Tanjung Lesung,” Eneng Nurcahyati said.

Eneng Nurcahyati moreoevr added that Banten have more than thousands of destination with natural category. It is hoped that this tourism potential does not only attract tourists, but also can be enjoyed by the surrounding community. (VOI/NK/NT) 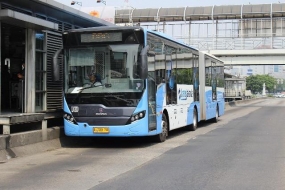 To welcome the 2018 Asian Games which will be held in Jakarta and Palembang, South Sumatra from August to September, Jakarta Provincial Government has prepared several strategies to overcome traffic congestion issue. One of these strategies is preparing additional Transjakarta buses in several areas that become the entrance gate to Jakarta.  It was stated by Jakarta Governor Anies Baswedan to reporters in Jakarta recently. He also expected people can utilize Transjakarta buses and not use their private vehicles to attend the 2018 Asian Games.

“Transjakarta will prepare special additional vehicles to serve the 2018 Asian Games from various points around Jakarta. So, people will not enter Jakarta by their private vehicle but by Transjakarta buses,” Anies said.

In addition to providing buses for visitors, according to Governor Anies Baswedan, the Jakarta Provincial Government will also provide buses to accommodate athletes or contingents of the 2018 Asian Games. The buses will serve them who stay at the Athletes Guesthouse at Kemayoran to the 2018Asian Games,at Senayan area. Currently, Jakarta Provincial Government is trying to make travel time from the Athletes Guesthouse to the Asian games 2018 venue in 30 minutes. (VOI/REZHA/NITA)