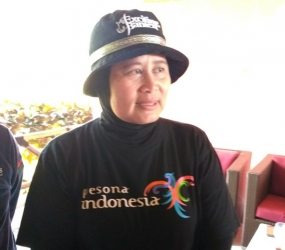 Banten Province developsits tourism potential that can increase the visits of domestic and foreign tourists. Head of Banten Provincial Tourism Office, EnengNurcahyation the sidelines of the launch of Rhino X Triathlon 2018 on Sunday, May 13th, at TanjungLesung, Banten, Indonesiasaid that the calendar of events used to arrange cultural agenda and various festivals of Banten Province significantlyincreases the number of tourists’ visits.

“We have not measured the effect of the calendar of event but the data show that there is significant increase of the number of tourist visits. Currently there are nearly 16 million domestic tourists and 300 thousand foreign tourists. But we have not specifically seen the impact in 2017. In 2018 we have not calculated significantly, because we just passed the first quarter. Currently it is still in the process of evaluation of every municipality and regency. We are also developing regional tourism information system to see how it really is in real terms, because Statistics Agency released its release in one year. So we try to find out the priorities and destinations that are greatly demanded by the tourists through the cooperation of city districts, including also managers of tourist destinations and hotels. We try to develop the existing tourism system,” Eneng Nurcahyati said. Bomb attacks occurred at three churches in the East Java provincial capital of Surabaya on Sunday morning(13/5). Spokesman for the East Java Provincial Police Senior Commissioner Frans Barung Mangera said that the bomb attacks occurred in three locations, namely Santa Maria Tak Bercela Church in Ngagel, GKI (Indonesian Christian Church) in Diponegoro Street, and a church in Arjuna Street. He said,  the police have conducted investigation in the three locations. The explosion in front of Santa Maria Tak Bercela Church has killed two persons and injured 13 others. He also added, there are only three locations. He urged people to not believe in misleading information that the bomb exploded in five locations or any others. The police would share updated information on the victims as well as the incident in the three locations. Barung said, the bomb in Santa Maria Church exploded at 7.30 a.m, while two other bombs in GKI and Pantekosta Churches at 7.35 a.m and 8.00 a.m. (ANTARA) 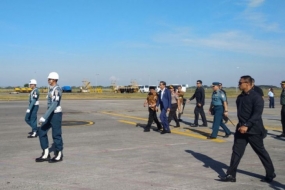 Previously, President Jokowi canceled two of his agenda in Jakarta and immediately departed to Surabaya shortly after receiving reports of a bomb explosion in the city.

The first church visited by the President was the GKI church on Jalan Diponegoro. The President and entourage arrived at 3.30 p.m. and were greeted by East Java Governor Soekarwo and Surabaya Mayor Tri Rismaharini.

Then at 3:45 p.m. the President arrived at Central Pentecost Church Surabaya on Jalan Arjuna. At the church whose parts were burned, the President chatted with the coordinating minister for Political, Lagal and Security Affairs, the head of BIN, the chief of the National Police and Commander of the TNI.

The President on the occasion received reports on the explosions at the Church of the Immaculate Santa Maria on Jalan Ngagel Madya, Indonesian Christian Church (GKI) on Jalan Diponegoro, and Central Pentecostal Church on Arjuna Road.

"The act of terrorism is really barbaric and beyond the limits of humanity that caused victims of community members, police officers, as well as innocent children including perpetrators who use two children aged about 10 years as suicide bombers," the President said.

He asserted that terrorism is a crime of humanity and has nothing to do with any religion where all religious teachings reject any terrorism. (ANTARA) 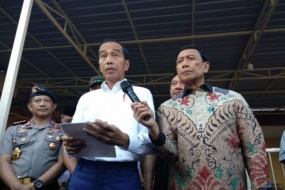 President Calls on People to Remain Calm after Terrorist Attacks

President Joko Widodo (Jokowi) called on the people to remain calm and preserve unity and alertness following terrorist attacks on churches in Surabaya, East Java, on Sunday. "I appeal to all people across the country to remain calm, maintain unity and alertness," he said at a press conference in response to the suicide bomb attacks in the morning that day.

He cancelled two agendas to visit the city after receiving reports about the incidents.

In view of that he called on all elements in the country to unite to fight terrorism.

"We must be united to fight terrorism and let us pray for all the dead victims and their families," he said.

To the wounded victims he would also pray for their immediate recovery.

Fourteen people died and more than forty others had been wounded in the bomb attacks. (ANTARA)