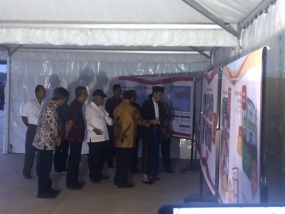 Indonesian President Joko Widodo observed the construction  of Gempol -Pasuruan Toll Road Section 2 of 6.6 kilometers long Rembang - Pasuruan route. During his visit to Pasuruan Regency on Saturday (12/5) President Joko Widodo conveyed that the section 2 of Gempol Pasuruan toll road has entered the feasible operation process on Eid Al-Fitr or Lebaran 2018. During his visit, the President confirmed that the toll roads from Merak-Banten to Pasuruan-East Java will be used to support the smooth flow of homecoming. The President ensured although there are several segments with functional status, it can be used before Idul Fitri.

“We want to ensure the use of toll road for homecoming. We make sure toll road from Merak to Pasuruan can be used for homecoming. Although there are several kilometers still in functional condition, it will be operated. We hoped Lebaran this year, we have better road and smooth traffic,” President Joko Widodo said. 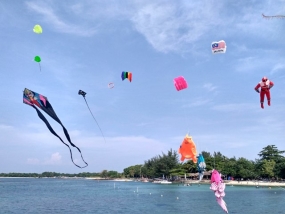 Rhino Kite Festival 2018 is held for the second time this year on Saturday and Sunday (May 12-13) in Tanjung Lesung, Banten, Indonesia, participated in by foreign countries such as Malaysia, Singapore, Germany, Netherlands, Belgium and Indonesia as the host.  Rhino Kite Festival is part of Rhino Cross Triathlon (Rhino X-Tri) which is the first Cross Triathlon open championship in Indonesia. The event consists of swimming, cycling and running across the beauty and natural challenge of Tanjung Lesung on September 29 to 30, 2018. Founder of Indonesian Kites Museum, Endang Ernawati said on Saturday (12/5) in Tanjung Lesung, Banten, Indonesia that there were 100 kites managed to be flown in the festival. Moreover Endang also said that she will make an innovation to promote and re-introduce one of Indonesian cultural heritages such as wayang through the kites festival.

"On May 30th, I will sign an MOU with India to hold a cooperation in cultural sector. Because on May 30th India Prime Minister will visit Indonesia and play kites at Monas square. I will also hold a kite exhibition in similar shape with wayang figure,  we are searching the red line then I suggested Ramayana," said Endang Ernawati.

Endang Ernawati moreover added that kite is actually one of Indonesian cultures since the era of kingdoms in the 14th century during which the kites were made of dry leaves and bamboo stick. The kites with wayang figures will be the primadona of the kites flown by the Indian Prime Minister Narendra Modi and it is scheduled to be attended by Indonesian President Joko Widodo. (VOI/NUKE/NT) 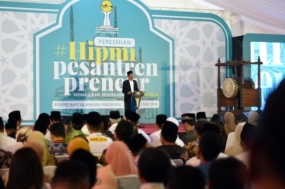 Indonesian President Joko Widodo appreciates the Association of Young Indonesian Businesspeople (HIPMI) of East Java on its Pesantrenpreneur or Islamic boarding school-based economy in Pasuruan, East Java. On the inauguration of Pesantrenpreneur at Bayt al-Hikmah boarding school (Pesantren), Pasuruan, on Saturday (12/5), President Joko Widodo said that this initiative could encourage economic improvement through young entrepreneurs. In its implementation, Pesantrenpreneur formed as retail shop,  and sell products which produced by santri or students namely Ummart. It also sells product from Micro, Small and Medium Enterprises (MSME). The President encourages that this initiative can be disseminated throughout pesantren in Indonesia.

“I would like to express my higher appreciation to HIPMI, especially East Java chapter which has penetrated the boarding school with Ummart, with pesantrenpreneur.  The program is launched in order to improve the economy from our young entrepreneurs. We should continue to push and motivate the idea, there are not only 10 Ummart, I hoped there are available Ummart in at least 30 thousand pesantren. I have seen Ummart, N-Ummart, in some pesantren, that we must continue to develop,” President Joko Widodo said.

Meanwhile, chairman of East Java HIPMI, Mufti Anam explained that the initiative of pesantrenpreneur has spread in 10 pesantren in East Java. With the potential of 30 thousand pesantren in Indonesia and 5 million students and tens of thousands of alumni, Mufti Anam believes that pesantren is a strong entity for the education pillars of people, and has  potentially mobilizing the people's economy. He said that the pesantren-based program has the goal to generate the youth economy up to the remote areas or villages. Mufti Anam targets the creation of 1,000 Ummart Shops throughout East Java.  (VOI/Ndy/Trs.Rezha/NT) 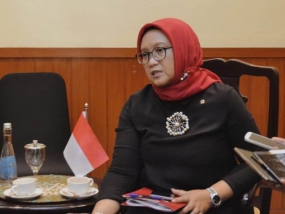 On Friday, May 11, 2018, Minister of Foreign Affairs of the Republic of Indonesia, Retno LP Marsudi and her Brazilian counterpart Minister Aloysio Nunes Ferreira signed three documents of agreement between the two countries, namely the approval of visa exemption for diplomatic and official passports, exchange of notes for visa exemptions for regular passport holders and technical cooperation agreements.

“Today, we just witnessed three signings of approval on visa exemption for diplomatic and official passports, and exchange of notes for visa exemptions for regular passport holders and technical cooperation agreements,” Minister Retno said after the bilateral meeting between the two countries at Novotel Hotel in Bogor, West Java more recently.

Minister Retno Marsudi further said that the three instruments of approval could strengthen bilateral relations between Indonesia and Brazil, and there would be no barrier to visit each other among the people, officials and others. So hopefully with an intensive visit, the relationship between the two countries becomes more advanced. (Egi-VOI/Trans by Rhm)