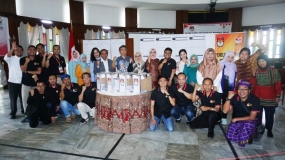 They diligently followed the vote counting from morning to evening, when the vote count was finished. During the lunch break, they enjoyed Indonesian cuisine provided by the Indonesian embassy (KBRI), which Indonesian people rarely enjoyed in Addis Ababa.

"Why are there so many temporary mothers? Because the people of Indonesia in Addis Ababa are busy working in their respective workplaces because today in Ethiopia it is not a holiday", said Al Busyra Basnur, Indonesian Ambassador to Ethiopia, Djibouti and the African Union, along with his wife, Wenny, also participated in the process of counting votes from beginning to end.

The final results of the 2019 Election vote count in Addis Ababa, recorded 01 presidential candidate pairs, won a majority of 71.24 percent. While the Presidential Candidate 02 won 27.45 percent of the vote. 2019 elections in Ethiopia and Djibouti run safely and smoothly.

The vote counting at the Indonesian Embassy in Addis Ababa was also broadcast live, so that people could watch it in person. Especially for around 150 Indonesian people who work in three Indonesian companies at Hawassa Industrial Park. (Release) 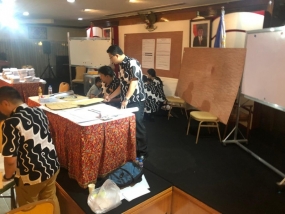 The vote counting process was witnessed directly by a number of Indonesian citizens who were domiciled in Manila as well as staff from the Indonesian embassy (KBRI) Manila.

In the calculation of ballots completed at 23:55 local time, carried out for 1,254 voters in two polling stations.

The candidate pair (Paslon) 01 received 1,163 votes, while Paslon 02 received 91 votes. As well, there are 5 invalid ballots for presidential / vice presidential candidates and 43 illegitimate ballots of the DPR-RI.

The counting of the votes took place safely and smoothly, and was enthusiastically followed by the Indonesian people in Manila and its surroundings. (rri.co.id from ril) 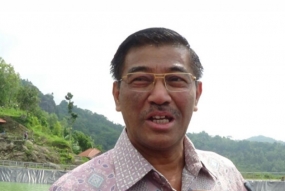 The counting of ballots carried out at the Indonesian Embassy in Bangkok, went smoothly and smoothly. Everything is like being hypnotized to follow the counting process from start to finish.

Indonesian Ambassador to Bangkok Thailand Ahmad Rusdi confessed to RRI, was very satisfied with the work of the Bangkok PPLN team that had worked optimally since the Election (10/04/19) to this day Wednesday (04/17/19) in the ballot counting process .

"Ithis has been taking ballot counting, either by mail or we go to prison. This shows the professionalism of PPLN, everything went well. Security is under control, and the community feels safe and comfortable within the Indonesian Embassy. In essence PPLN has worked well with KPPSLN and the community has supported it to the maximum, "said Ahmad Rusdi.

The ballot counting process is very conducive, and is open to the public, so that in RRI's monitoring, more and more people in Indonesia come to attend the ballot calculations late in the afternoon. Two (2) polling stations provided by each polling station 01 for the Mobile Ballot Box (KSK) method, and the TPS method for the DPR RI. TPS, 02 for the postal method and presidential voting, as well as the legislature at the polling station. 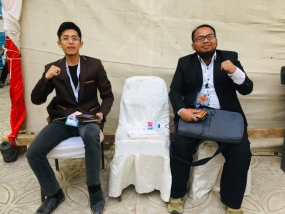 Chairperson of the Prabowo-Sandy Egypt Winning Team Achieved The Goal

Cairo-Egypt's Chairman Prabowo-Sandy, Boris Yudiarso told RRI said that in the process of counting the ballots, his party sent 30 Witnesses consisting of 15 witnesses to the Social Justice Party (PKS) and the rest from Prabowo-Sandy's National Winning Body in Cairo ,Egypt.

"Alhamdulillah, we feel very plaintive even though initially we were a little worried because our undocumented migrant workers (TKI) could choose or not, but finally there was a KPU decision that instructed them to vote," he said, met on Wednesday. (4/17/2019).

Boris added that the president's vote count in Egypt had known the results were just beginning and he hoped the good results would also occur domestically.

"Whoever the elected President will be in the first assignment means that there is still preamble, our next assignment is actually still very long, namely guarding his promises (Prabowo) so that they are correct in five years," he said.

The results of the vote while the 15 TPS Presidential Election held at the Indonesian Embassy in Cairo, namely Jokowi-Ma'aruf obtained 1,608 votes and Prabowo-Sandy received 4,737 votes with 29 invalid votes.