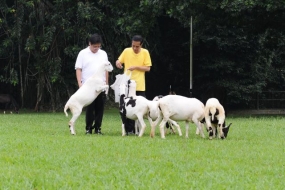 “I mentioned earlier about the possible criteria that Golkar has; what are the desired criteria of Golkar. The discussion is still about the criteria instead of individual. In our own internal, it still is not finished yet,” President Joko Widodo said.

Furthermore, President Joko Widodo said that the discussion about the vice presidential candidate in the upcoming 2019 presidential election is still under discussion. He said that he still needs to meet a number of Chairmen of political parties and set the criteria in the internal forum of the Indonesian Democratic Party of Struggle –PDI-P. Meanwhile, Airlangga Hartarto said that both of them discussed the criteria of the vice presidential candidate who can support President Joko Widodo. Airlangga also affirmed that Golkar Party has an infrastructure that is committed to maintaining the integration of the Indonesian nation, especially in facing the 2019 Presidential Election. (VO/Ndy/Trans by Rhm)

Indonesian Vice President Jusuf Kalla will attend the National State Defense Camp held by Kwartir Nasional (Kwarnas) an organization managing the National Scout Movement, on Sebatik Island, Nunukan Regency, North Kalimantan on May 1 - 6. Vice Chairman of the Kwarnas Scout Movement for Youth Members Budi Prayitno in his written statement in Jakarta on Sunday said that the National State Defense Camp will bring together Indonesian young people from various regions in the campground. One of the goals of organizing the event is to increase the intensity of interaction and mutual cooperation among the participants. Meanwhile, Chairman of Kwarnas Scout Movement Adhyaksa Dault said that for the younger generation, outdoor activities such as camps will encourage effective education for children. All the activities of the Scout Movement are aimed at building the Unitary State of the Republic of Indonesia, practicing Pancasila, and conserving the environment. Therefore, Scout Movement in 34 provinces, 514 cities/districts are actively involved in mutual assistance, to realize the great ideals of Indonesia. (ANTARA) 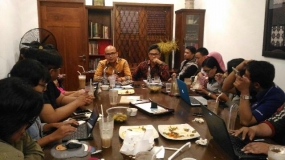 Bali will become an annual host of the 2018 Indonesia-Africa Forum next April. In a press briefing in Jakarta recently, Spokesperson of Foreign Affairs Ministry, Armanatha Nasir said one of the points to be discussed in the forum is digital economy. Since, the digital economy has great potential that can be developed in Africa.

“What we need to see is that now, the African population as a whole is nearly 1.3 billion people and the population growth until the 21st century that’s projected 40% growth will be present in Africa. So, we can imagine that their demographic dividend or demographic bonus will be the largest in Africa; the young will be in Africa, and this will be very potential for us to develop digital economy,” Armanatha Nasir said.

Armanatha further said that so far, the relationship between Indonesia and African countries is still in political sphere. At the upcoming forum, what to be encouraged are economic relations. He said the aim of the Indonesia-Africa Forum is to introduce Indonesia's superiority to Africa, and African excellence to Indonesia in the hope of opening wider trade cooperation. Meanwhile, Director for Africa at the Ministry of Foreign Affairs, Daniel Tumpal Simanjuntak said that the meeting to take place in Bali on 10 and 11th of April will be opened by President Joko WI dodo. The forum will be attended by about 550 participants from 53 African countries. (VOI/Rifai/Trans by Rhm) 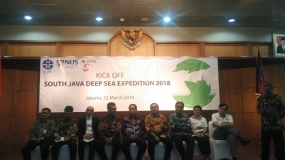 Indonesia through the Indonesian Institute of Sciences-LIPI with Singapore through the National University of Singapore -NUS will perform deep-sea expeditions in the southern part of Java to uncover the potential of deep- sea biodiversity on which there is no data yet. A total of 31 people consisting of researchers and technicians will hold the expedition from March 23 to April 5, 2018 in the southern part of Java Sea. This first deep- sea expedition also marks the 50th anniversary of Indonesia-Singapore diplomatic relations. This was stated by Deputy of Earth Science of LIPI, Zainal Arifin in his speech at the launch event of the expedition in Jakarta on Friday (March 23rd, 2018).

“Today, we will launch first joint expedition on deep sea biodiversity; this occasion also marks 50-year diplomatic cooperation between the government of Indonesia and Singapore. Around 30 researchers will participate in the expedition, the study area at the Java Sea, or Java Trench which is very deep I think 200 to 7000 meters deep. Our marine scientists are aware that the water condition in Southern part of Java is relatively rough with high waves which sometimes can reach to five meters high,” Zainal Arifin said.

Zainal Arifin also disclosed that the expedition in the next two years can be known whether new species are found. In addition, he expressed that this expedition is a special one because all parties involved comes from ASEAN countries. Previous deep-sea expeditions conducted in the world are dominated by western countries. Basically, this expedition will be divided into two major activities. The first one is on board activities which include sampling and handling of samples which then proceed with data compilation. The second one is post-expedition activities that include follow-up sampling, preparation of interim reports, and workshops. The results of the expedition are planned to be shared and discussed at a special workshop to be held in Indonesia in 2020. (VOI/Rezha/Rhm)