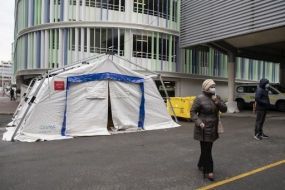 France has banned gatherings of more than 1,000 people to try and slow the spread of COVID-19, the health minister said, while the number of French lawmakers infected with the virus rose to four.

Oliver Veran confirmed the beefed-up measures on Sunday but said officials would issue a list of events considered "useful to national life" that would be allowed to continue -- such as demonstrations.

With more than 1,100 recorded cases and 19 deaths so far, France is the second worst affected European country after its neighbour Italy, which has imposed a sweeping lockdown on the most hard-hit northern regions.

Germany also encouraged the cancellation of events with more than 1,000 participants, as countries worldwide scrambled to contain the disease that first emerged in China in December.

This brings the number of infected lawmakers to four, while two other employees at the French parliament have also caught the disease.

The French government had already banned gatherings in confined venues of more than 5,000 people -- a measure that had been set to continue until April 15. Veran did not specify the terms of the latest, stricter ban.

"This evening we are still in the 'second stage', meaning that our priority is to do everything to slow the spread of the virus in our national territory," he said.

France is preparing to transition to its third level of alert, which would include school closures and public transport suspensions in an attempt to mitigate the consequences of an outbreak -- measures that President Emmanuel Macron has said are now "unavoidable".

The new rule on large gatherings will have major consequences for sporting and entertainment events, with previous cancellations including a book fair and a tattoo salon.

Paris Saint-Germain's Ligue 1 game at Strasbourg on Saturday was postponed, as well as the women's Six Nations rugby showdown between Scotland and France.

Last week Macron said French authorities would requisition all face mask stocks and production in the coming months, and distribute them to health professionals and infected individuals. 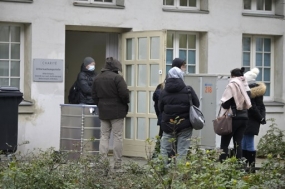 The government of German Chancellor Angela Merkel has taken its first steps to help companies and workers affected by the fallout from the coronavirus outbreak and will invest an additional 12.4 billion euros (US$14.1 billion) between 2021 and 2024.

After more than seven hours of talks on Sunday night, Merkel’s coalition loosened rules for short-term work compensation, making it easier for big companies heavily affected by the virus like Deutsche Lufthansa AG to apply for aid to offset wages when they are forced to temporarily halt work. “No company in Germany should go bankrupt and no job should get lost due to the coronavirus,” the coalition said in a statement after the meeting.

Pressure for Germany to act intensified in the days before leaders of Merkel’s Christian Democratic-led bloc and the Social Democrats met in the chancellery in Berlin. The death of the first German from the coronavirus, a 60-year-old man who vacationed in Egypt, added to the pressure. While short of the full-blown stimulus package that many economists and investors urged, Germany’s government sought to walk a fine line between reassuring business and avoiding public panic.

Merkel’s coalition could not agree on other measures like an accelerated phase out of the so-called solidarity tax, which helped pay for reunification, or an expansion of funds for state-backed loans and guarantees to ease a cash crunch for companies affected by supply and demand disruptions.

The clearest sign that the virus was hitting the German economy came on Friday, when Deutsche Lufthansa AG slashed capacity by as much as 50 percent.

“The impact on our booking situation is immense,” Chief Executive Officer Carsten Spohr said in an internal memo to employees seen by Bloomberg. “We must assume that it may take months before we will see first signs of stability,” he said in the Friday message.

German companies cut spending for a third quarter at the end of 2019, leaving the economy vulnerable to supply chain havoc caused by the outbreak. Gross domestic product stagnated in the fourth quarter, slowing the annualized pace of growth to 0.3 percent.

While Germany has Europe’s fullest budget coffers, Merkel’s government has long resisted pressure from the European Central Bank and other institutions to unleash its fiscal power with a stimulus that might benefit the region’s wider economy.

European finance ministers were warned last week that a prolonged coronavirus outbreak in the region could threaten “cascading effects” stemming from companies suffering squeezed liquidity, which could then be amplified by financial markets.

Germany is stepping up efforts to slow the spread. Health Minister Jens Spahn on Sunday proposed canceling events of more than 1,000 people, a move that would rule out most professional sporting events and big concerts. Germany’s professional soccer league vowed to finish the season, but said it would work with authorities about holding matches, opening the door to playing in empty stadiums.

Eliminating the solidarity tax -- a 5.5 percent surcharge on income -- could shore up domestic demand. The tax, levied after the collapse of the Berlin Wall to help fund infrastructure in the former communist East, generated nearly 19 billion euros for the German government in 2018. It had been eliminated for 90% of taxpayers by the coalition -- a cut that had been set to take effect in 2021.

Read also: Indonesia can afford the coronavirus battle, but...

Olaf Scholz, Merkel’s Social Democratic finance minister, had pushed for moving forward the reduction of the tax this summer. He also championed a plan to take on 42 billion euros of debt from cash-strapped communities in an effort to divert local coffers to infrastructure projects, such as school and road repairs.

Merkel’s CDU had previously ruled out a more sweeping stimulus package to stem the damage wrought by the virus outbreak, arguing that a surge in public spending won’t address worries among consumers and investors.

That flew in the face of growing calls by industry groups for more action. The country’s influential industry federation BDI on Thursday warned of a recession and urged the government to consider stimulus measures.

The meeting was overshadowed by the refugee crisis at the Greek-Turkish border and a conflict between Merkel’s CDU-led conservative bloc and the Social Democrats over the question of whether Germany should let some of the refugees into the country. The government agreed to help between 1,000 and 1,500 children who need medical treatment in the context of a European “coalition of the willing.”

Indonesians in Saudi Arabia urged not to travel to Mecca, Medina

The Indonesian Embassy in Riyadh has called on Indonesian residents in Saudi Arabia not to travel to Macca and Medina for the time being amid the ongoing concerns over the spread of novel coronavirus diseases."Until this time, the Saudi government still bans Muslims from all over the world from performing umrah (minor hajj) pilgrimage," the embassy revealed in a press statement on Sunday.The temporary ban is imposed on the Saudi residents and expatriates who stay inside and outside the two cities, the Indonesian embassy said.The Saudi authorities also restrict the arrivals of flights from United Arab Emirates, Kuwait, and Bahrain at three international airports -- King Khalid, King Abdulaziz, and King Fahd in Dammam.This latest policy has been made effective since March 7, 2020. On the same day, the Saudi Ministry of Sports also prevent people from attending sporting events.Over such ongoing concerns regarding the spread of the COVID-19 outbreak which has killed more than 3,600 people and infected at least 106,400 people all over the world, the Saudi Government has been banning the inflow of foreign umrah pilgrims since February 27.Among the countries reporting confirmed COVID-19 cases are nations with Muslim-majority populations, including the United Arab Emirates, Malaysia, Iraq, Iran, Kuwait, Bahrain, Afghanistan, Oman, Egypt, and Indonesia.Indonesia respected the decision saying that it is aimed to prioritize the Saudi citizens' health and safety amid the spread of COVID-19 that continues to lead to rising number of casualties."We respect (the decision), as the Saudi Arabian government is prioritizing health," President Joko Widodo stated recently.Early this week, Indonesia's Religious Affairs Minister Fachrul Razi affirmed that preparations for the Hajj pilgrimage in 2020 had run as scheduled, notwithstanding the global uncertainty over the COVID-19 outbreak."Preparations are still on for the Hajj pilgrimage, and no changes are expected," Razi stated.Saudi Arabia, where the Islamic Holy Cities of Mecca and Medina are located, is a destination for Muslims worldwide that are keen to perform Hajj and Umrah pilgrimages. 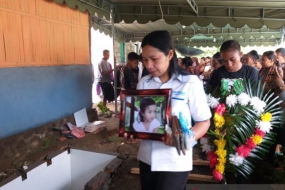 13 Sikka residents have died of dangue fever since early 2020

The Sikka District Health Office, East Nusa Tenggara, reported here on Sunday that 13 people had died of dengue fever since the beginning of this year."Until now, the death toll from dengue fever has reached 13, an increase compared to that over the last few days," Acting Head of the Sikka Health Office Petrus Herlemus said.Last Wednesday (March 4), the number of people who died of dengue fever was 11, and it increased to 13 on Sunday, he said.Meanwhile, a total of 108 people, including children, were currently being treated for dengue fever in three hospitals - TC Hillers, Lela Hospital and Kewapante Hospital.A total of 1,145 people had been treated for dengue fever in Sikka during the January-March 4 period.The dengue fever outbreak has forced the Sikka authorities to declare an emergency situation, beginning March 3, for 14 days.The local administration has tried to prevent dengue cases in the area by spreading fogging, socializing the danger of dengue fever, giving out mosquito repellent, and distributing abate powder.Dengue fever was rampant in Sikka due to poor sanitation facility and lack of awareness of the local people as most of them did not go to doctors immediately when they were sick.The local health office has opened 24-hour laboratory posts serving local people wanting to check their blood.