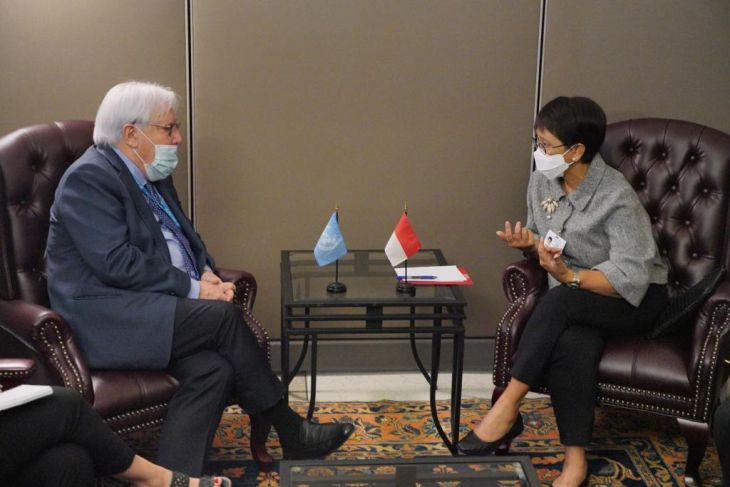 The Republic of Indonesia (RI) has warmly welcomed the UN-brokered Black Sea Initiative to ensure the shipment of food and fertilizer supplies from Ukraine and Russia.At a meeting with the chief of UN Humanitarian Aid, Martin Griffiths, in New York on Monday (September 19, 2022), Indonesian Foreign Minister Retno Marsudi underscored the significance of implementing the initiative, particularly to assist developing countries in securing food and fertilizer supplies for their people.The shipment of food and fertilizer supplies from Ukraine and Russia has been disrupted due to the war between the two countries.Griffiths briefed Marsudi on the latest development in the export of Russian wheat, the Indonesian Foreign Ministry said in a written statement released on Tuesday.Griffiths and Marsudi have routinely held communication ever since the impact of the Russia-Ukraine war on food supplies has been felt. They had also held intensive communication ahead of President Joko Widodo's visit to Kyiv and Moscow late in June 2022.Besides the implementation of the Black Sea Initiative, they also discussed humanitarian aid to Myanmar. They agreed that the necessary humanitarian aid reached all people in need in Myanmar without discrimination.They also underscored the importance of synergy in sending humanitarian aid from ASEAN and the UN to Myanmar. Indonesia has been chosen as the chair of ASEAN in 2023.At the meeting, they also discussed the humanitarian situation in Afghanistan, which has shown no signs of improvement. Griffiths warmly welcomed Indonesia's role in promoting communication with the Afghan ulemas and encouraging the advancement of Afghan women's right to education. (Antaranews)