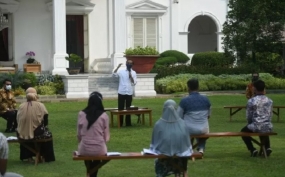 President Joko Widodo (Jokowi) asked micro and small business actors not to close their businesses or go out of business and remain enthusiastic about entrepreneurship amid the pandemic.

"I have experienced the same as Ladies and Gentlemen, once again the spirit of work should not be slack, maintain your business, do not close, do not lose," President Jokowi said during the Provision of Working Capital Assistance (BMK), at the Bogor Presidential Palace, West Java, on Tuesday.

On that occasion, dozens of micro and small business actors including mobile traders who usually operate in Bogor, West Java, were invited to the courtyard of the Bogor Presidential Palace.

The Head of State also took the time to have a dialogue with several micro-entrepreneurs and asked about their difficulties. A hodgepodge trader complained that his turnover had fallen by half during the pandemic, as did the hawkers who used to sell tissue and candy, who now only got around Rp 60,000 in profit a day.

President Jokowi said that similar conditions occurred not only in Indonesia but also occurred in 215 countries.

"The conditions are exactly the same, not only the small ones, the micro, the medium ones, the big ones are all in the same position, all have difficulties, therefore in this condition we must work even harder, have to endure, and work even harder,” President Jokowi said.

President Jokowi emphasized that in these conditions morale must not decrease.

"We hope that in December, vaccines will enter, and next year it will be normal, don't lose momentum when it is normal, there is no working capital, this must really be calculated," President Jokowi said.

President Jokowi also advised that the working capital assistance provided to micro and small entrepreneurs be used for business capital and not for consumptive purposes. (Antaranews) 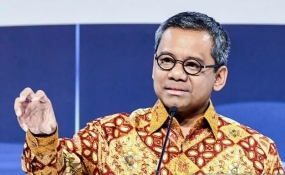 Deputy Minister of Finance Suahasil Nazara emphasized that government spending in the state budget and regional budget has become the backbone of Indonesia's economic growth in the midst of the COVID-19 pandemic crisis.

"The state budget and regional budget are the backbones, therefore we ensure that the expenditure is sufficient and useful to handle the economy," he said in an online discussion in Jakarta, on Tuesday.

Suahasil said that amid the COVID-19 pandemic, which caused state revenues to fall, the government could not reduce spending to maintain good budget conditions.

According to him, the government should increase spending, especially those aimed at helping people affected by the pandemic even though the deficit has become very high.

He said that Indonesia is actually known as a very disciplined country in managing the state budget deficit, which has always been below 3 percent of gross domestic product (GDP) since 2013.

He said the pandemic forces the government to increase the deficit to more than 3 percent by 2022 through issuing Law Number 2 of 2020.

"It is not unlimited but limited to 2022 to deal with this COVID-19 pandemic," he said.

He ensured that deficit increase would be reflected in the optimization of spending, one of which was through the PEN program with a total budget of Rp.695.2 trillion for the six focus sectors.

"We carry out the six areas of the national economic recovery program through the state budget and regional budget," he said.

"Ensuring all activities carried out in a short time remain accountable. Our entire society is waiting for the realization of the national economic recovery budget," he said. (Antaranews) 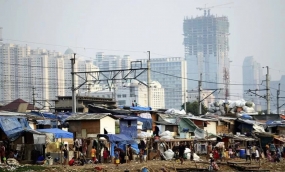 The World Bank in its latest economic report states that the COVID-19 pandemic has hit economies in East Asia and the Pacific, calling for urgent action to prevent stunted growth and increase poverty in the coming years.

"COVID-19 is not only hitting the poor the hardest, it is creating ‘new poor.’ The region is confronted with an unprecedented set of challenges, and governments are facing tough choices," World Bank Vice President for East Asia and Pacific Victoria Kwakwa said in a statement in Jakarta on Tuesday.

The October 2020 edition of the report entitled From Containment to Recovery stated that the COVID-19 pandemic had caused three shocks to the region, namely the pandemic itself, restrictions on the economy, and the echo of a global recession caused by the crisis.

This situation could lead to an increase in the poverty rate in East Asia and the Pacific region for the first time in 20 years with an estimated 38 million people remaining or being pushed back into poverty. based on the poverty line for upper-middle-income countries of US $ 5.5 per day.

"But there are smart policy options available that can soften these tradeoffs - such as investing in testing and tracing capacity and durably expanding social protection to cover the poor and the informal sector," she said.

The report warns that if action is not taken on multiple fronts, the pandemic could reduce regional growth over the next decade by one percentage point per year, with poor families having the greatest impact, as they have less access to health, education, and healthcare facilities. work, and finance. 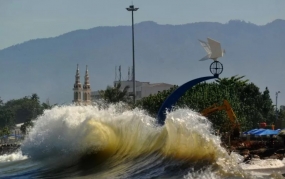 The Meteorology, Climatology, and Geophysics Agency (BMKG) encourages research and studies on earthquakes and tsunamis to strengthen mitigation to prevent and minimize casualties and damage due to disasters.

"Studies should always be encouraged with the aim not to cause public anxiety and panic, but to support the strengthening of the disaster mitigation system," BMKG Head Dwikorita Karnawati said in a press release received in Jakarta, Tuesday.

He explained that since several years ago researchers had made studies on the potential for tsunamis, including due to the megathrust earthquake on the South Coast of Java, which could reach 20 meters high and the waves could arrive at the coast in 20 minutes.

Research on tsunamis such as that conducted by Widjo Kongko (2018), Ron Harris (2017-2019), and a cross-agency team led by the Bandung Institute of Technology (ITB) and supported by BMKG are needed to strengthen earthquake mitigation and tsunami early warning systems.

Strengthening the earthquake mitigation system and tsunami early warning is very important considering the potential for earthquakes and tsunamis in Indonesia does not only cover certain areas such as the southern coast of Java.

Indonesia is prone to earthquakes and tsunamis with varying wave heights and has the potential to occur in coastal areas facing the Indian Ocean and Pacific Ocean and beaches adjacent to active faults in the sea (back-arc) or stretching out to sea.

According to the latest ITB research based on seismic data analysis and tsunami modeling, in the worst-case scenario assuming an earthquake occurs simultaneously in two megathrust segments in the southern part of Java, the western part and the eastern part, a tsunami with a maximum wave height of 20 meters can occur in either area south of Banten and reached the coast within 20 minutes of the earthquake.

The mechanism of the tsunami event is based on modeling similar to that of the 2004 Aceh tsunami, the tsunami caused by an earthquake with a magnitude of 9.1 which reached the coast in less than 20 minutes.

Based on the modeling, land on the coast is at an altitude of over 20 meters is relatively safer from the threat of a tsunami hazard. The modeling results can be used as a reference in preparing evacuation routes and places as well as land arrangements in tsunami-prone areas.

Dwikorita said that since 2008 BMKG has built an early warning system to monitor earthquake events and provide tsunami early warnings.

Within three to five minutes after the earthquake, the Early Warning and Monitoring System operated with the Internet of Things (IoT) and strengthened by supercomputers and artificial intelligence can automatically disseminate tsunami early warning information to communities in earthquake and tsunami-prone areas through various information channel.

With the use of this tsunami early warning system, there are still 15 to 17 minutes left for the evacuation process if a tsunami is estimated to arrive in 20 minutes. (Antaranews)