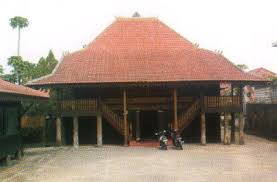 Some islands in Indonesia have been occupied by traditional people from various tribes. Therefore, now wonder if Indonesia has many kinds of alphabets, languages, traditional clothes and houses. Among those cultures, a traditional house is a leading benchmark which describes culture of a tribe. Besemah traditional house or also well-known Baghi house has been used since hundreds of years ago by ancestors of Besemah people, Pagaralam. The type of the Besemah house is divided into two: Tatahan and Ghilapan. Tatahan is parts of the house, especially wall which is carved. While Ghilapan is a plain walled. Both of them have similar size, namely 8 x 8 meters. The inside part of the house is only one wide room without bulkhead. But, some houses are in accordance with development era, and in the room of the house, there is partition. The section of the kitchen which is called ‘Pawun’ is built separately. The construction of Baghi house is very unique. Uniting parts of the house doesn’t use any nail. If there are parts which need to be tied up, rattan is used. Thus, its pole isn’t planted into land. Those poles stand on stone pedestal. In the old construction, stone was used for every pole with triangle position. Along the history in Pagaralam, which is close to Mt. Dempo, Baghi house is never collapsed even though the region is often hit by earthquakes.