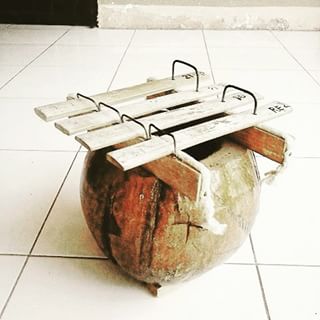 Various kinds of traditional arts, which are grown and developed by the people of Polewali Mandar, are an intuition of community for self entertainment. One of instruments, which is very unique from the region, is Calong.

This instrument, which is made from coconut and bamboo, began to be introduced in 2007 through Calong musical performance. Usually, the instrument is played solo. But by and by in its progress, the instrument has developed and can be played massively. You have just listened to Calong rhythm from Polewali Mandar. To make Calong is not easy and it needs long process. Firstly, the craftsman should find suitable coconut. The selected coconut is not too young and old. The coconut is also not too wet and dried. Because, such coconut is easy to lose its peel.  The second material is dried bamboo. The bamboo is usually used as buoy of Sandeq boat. The bamboo must be dried for 6 months. So, the sound, which is produced, is good. Then, there is wood as support in order Calong can stand well. To unite all pieces of bamboos and coconut, the craftsman uses stove wick and wire. Within one day, the craftsman only produces 3 until 5units of Calong.

Calong only produces tone: do, re, mi and si. The instrument is communication toll for farmers to give information by beating Calong at night. Calong craftsman or familiarly called ‘Papa Isang’ explained about Calong.

“…Calong is able to produce sound which can be heard until 3 – 5 kilometers away at night. In the past, Calong was played on leg; finally it finds one container, namely coconut. And this container can survive until now.” He said

Calong traditional instrument has sound like marimba but there is difference from tone. Calong produces very strong and high pitch. Calong tone is pentatonic or there are only 4 tones and arranged traditionally like on piano. At present, craftsmen create Calong with complete tones or called ‘Diatonic’ because it has enough tones to collaborate with modern instruments and more active in arrangement, because it has many similar tones like guitar.Adaptability, which is conducted by Calong craftsmen, is an effort for young generation of Polewali Mandar to love Calong. Of course, the young are certainly those who will preserve Calong and introduce to all people throughout the world. Well, that was a glimpse of traditional instrument from Polewali Mandar,West Sulawesi featuring Calong.