The Albanese Government has announced a new $10 million biosecurity cooperation package to assist Indonesia as it responds to the outbreaks of both foot and mouth disease (FMD) and lumpy skin disease (LSD).

The package announced by Minister for Agriculture, Fisheries and Forestry Murray Watt at the National Press Club today, will see Australia supply additional vaccinations, as well as technical and advisory support to strengthen Indonesia’s biosecurity measures.

According to a release received by Voice of Indonesia on Tuesday, Australia will deliver personal protective equipment and disinfectants, train staff on the ground, and provide biosecurity expertise to tackle these outbreaks.

Minister Watt said one of the ways to prevent any outbreak in Australia was to assist the Indonesian Government in their efforts to stop the spread of FMD.

“This package includes $4 million for the purchase of both FMD and LSD vaccines. This is on top of support already announced for Indonesia, which included 1 million doses of FMD vaccine and almost half a million doses of LSD vaccine already committed by the Australian Government,” Minister Watt said.

“The Indonesian Government will direct these vaccines to the areas of the country that need them the most.

“We’ve also included seed funding so Indonesia can get a livestock identification system up and running.”

Minister for Foreign Affairs Penny Wong said the package was another demonstration of the close partnership between Australia and Indonesia.

“Indonesia is one of our closest neighbours and partners in the region and the Australian Government wants to offer whatever help we can at this time,” Minister Wong said.

“Safeguarding the biosecurity of our region is a shared concern and this package will build on our longstanding health cooperation including through the Australia Indonesia Health Security Partnership.

“We are committed to working together to respond to this common threat.”//VOI

Prepare books for the Indonesian people, the National Library in collaboration with the TNI 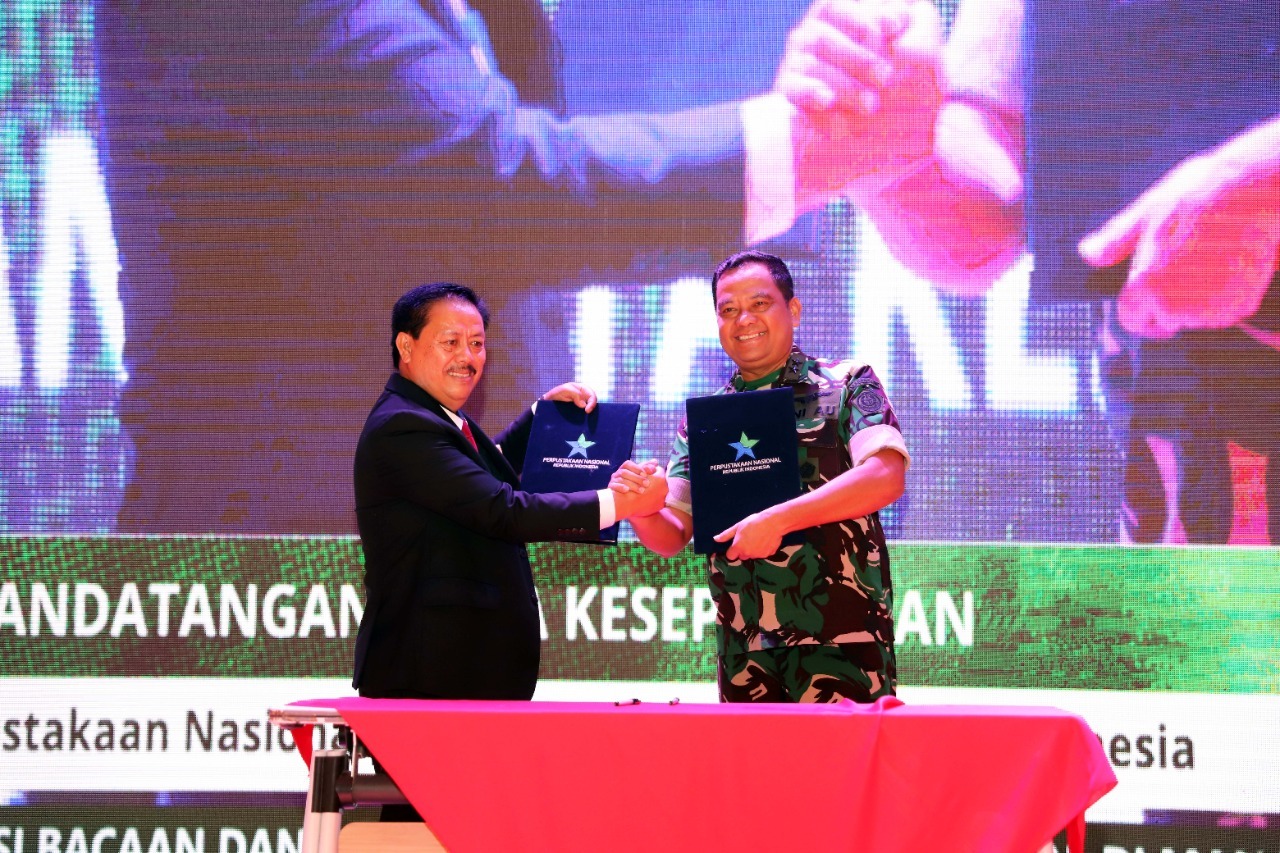 "We feel we have a new strength. Because we know the strength of the TNI to remote areas. It's not just about protecting the territory, but more about how to help improve the welfare of the Indonesian people. " he said on Tuesday (9/8/2022).

"I think the role of the TNI in Manunggal Rakyat is very important in accordance with the current library paradigm," he said.

It is said, National Library as a non-ministerial government institution has the task to formulate policies in the field of libraries in informing about the development of the world of science to all elements of society.

"The presence of the gentlemen of the TNI at this time has become a separate force in building synergy in ensuring the orientation of our future development, shifting from a war of physical strength to a war of thinking power," he continued.

According to a release received by Voice of Indonesia on Tuesday, the Assistant for Communication and Electronics to the TNI Commander, who read out the remarks from the TNI Commander, explained that the dynamics of the strategic environment at the global, regional and national levels had influenced the pattern and form of threats to become increasingly complex. Both military threats, non-military threats and hybrid threats.

"Answering this challenge requires a strong National Defense consisting of Military and Non-military Defense with reference to a universal defense system that is prepared early by the government," he said.

Furthermore, Agus added, this should be a major concern in efforts to increase the community literacy index. "This activity further increases the knowledge and insight of the community which will improve the quality of Indonesia's human resources," he added.

After the signing of the MoU, a talk show on Improving the Public Literacy Index (PILM) was held with the theme "Strengthening Defense and Security in the Era of Globalization Through Literacy Culture".

The Deputy Governor of Lemhannas RI, Mohammad Sabrar Fadhilah, said that defense and security are part of dynamic activities. Defense and security are not only a matter for the TNI but also for all parties. The TNI, including libraries, is a special part of the nation's children who must work together to face threats, challenges, obstacles, and disturbances.

"We also know that literacy, libraries and books are windows to the world that open our understanding of many things. So that the TNI views it is very necessary to be able to join hands with all parties to keep this country moving forward, continuing to exist to achieve national goals, a prosperous society. fair and prosperous," he said.

The Deputy Commander of the TNI Kodiklat, Marsda TNI Hesly Paat, said that the literacy culture in the TNI education environment, especially the Kodiklat (Army Doctrine, Education and Training Command), plays a role in improving the capabilities and qualifications of personnel in the TNI.

"In the training, it is necessary to strengthen the literacy that we get, maybe through digital or books in the library," he said.

The head of the Satriamandala Museum and TNI Library, Lt. Col. Adm. A. Rachman Jamal, explained that the essence of library management at the TNI History Center (Pusjarah TNI) is selecting and sorting out very credible reading books.

Because this is related to historical development, all books owned are related to special collections so that they can be used as research and writing materials.

"Because this village is connected to Likupang's super priority destinations. So we hope that the community can build tourist villages that support Likupang so that tourist visits here get a complete sensation because there are mangrove tours and underwater tours like this," said Sandiaga in a statement. his visit to Budo Tourism Village, Friday (29/7/2022).

According to a release received by Voice of Indonesia on Friday, Budo Tourism Village is one of the top 50 selected tourist villages in the 2022 Indonesian Tourism Village Award (ADWI) event. This village is located in Wori District, which is about 30 minutes from Sam Ratulangi Airport. It is known for its mangrove tourism and is an alternative gateway. to Bunaken Marine Park.

From the beach, tourists can see the beautiful scenery of Manado Tua Island, Bunaken, and Siladen as well as presenting stunning sunset views in the afternoon. In addition, there are about 30 hectares of mangrove forest with diverse mangrove vegetation.

Seeing the potential of this village, Sandiaga assessed that Budo Tourism Village could be part of the development of ecotourism in North Sulawesi. "Hopefully, Likupang will become quality tourism and Budo Village will become sustainable tourism," he said.

In addition, through the development of tourism in the Budo Tourism Village, it is also hoped that it can generate the economy and create jobs for the community. "Hopefully in the future, it will become a part of our economic revival," said Sandiaga.

Meanwhile, the Regent of North Minahasa Joune Ganda appreciated the success of the Budo Tourism Village Government and the North Minahasa Regency Government in reaching the Top 50 of ADWI 2022. "We want to show that we are very serious about revitalizing tourism in North Minahasa and we also hope that this will continue to get support from the central government. Moreover, Minahasa Urara has Likupang as one of the super priority tourist destinations," said Joune//VOI

Australian Volunteers is back to Indonesia

According to a release received by Voice of Indonesia on Friday, Australia is proud to be a partner country Indonesia's largest international volunteer. Australian volunteers in Indonesia carry out a number of activities in collaboration with various Indonesian organizations in both the private and public sectors. Assignment time for volunteers this can range from a few months to two years.

“The Australian Volunteers Program is an important part of the collaborative program the long-standing development of the Australian Government,” said Ambassador Williams.

Before the pandemic, in 2018-2019, there were 155 Australian assignment programs Volunteers in Indonesia. Volunteers work closely with partner organizations in throughout the archipelago, including those located in Bali, Central Kalimantan, DKI Jakarta, DI Yogyakarta, West Java, Lombok, North Sumatra, West Sumatra, South Sulawesi, and East Nusa Tenggara//VOI