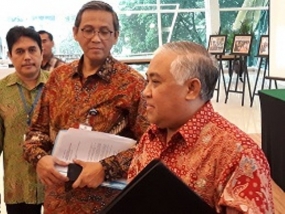 Indonesia Promotes Islamic Wasatiyat to the World Through Summit

The Office of Indonesian Presidential Special Envoy for Dialogue and Interfaith Cooperation and Civilization Affairs will hold a High Level Consultation of World Muslim Scholars on the Wasatiyat Islam (HLC-WMS). The summit will be held in Bogor, West Java on May 1-3, 2018 and in Jakarta on May 4, 2018.

There are several issues related to the Wasatiyat Islam that will be discussed at the Summit, starting from the level of conception, its implementation in the world, and also the challenges in the future. In addition, Indonesia will specifically share its experience in implementing the Wasatiyat Islam during this time.

According to Indonesian Presidential Special Envoy for Dialogue and Interfaith Cooperation and Civilization Affairs, Din Syamsudin in his press conference in Jakarta, Wednesday, April 25, 2018 Wasatiyat Islam is an Islamic concept of the middle way in Indonesia and is often misunderstood as a moderate Islamic concept by western people.

Din Syamsudin further explained that the Grand Imam of Al-Azhar, His Excellency Ahmed Ath-Thayeb will be present at the event as the keynote speaker. Around 50 prominent scholars and Indonesian Muslim scholars will participate in this activity. In addition there will be 50 prominent Muslim scholars from various countries, including from United Arab Emirates (UAE), Kuwait, Lebanon, Syria, Algeria, Singapore, Philippines, India, Canada, United States (USA), Russia, Italy, Bosnia-Herzegovina, and Jordan. (VOI/Rezha/DP) 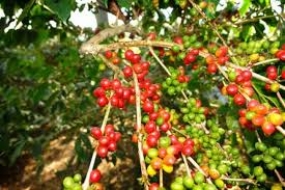 VOI NEWS - Chairman of the Association of Indonesian Coffee Exporters (GAEKI), Hutama Sugandhi assessed Indonesian coffee products have the best quality in the world. Nevertheless, Indonesia has challenges related to low coffee productivity. To RRI World Service Voice of Indonesia, on Tuesday, April 24th, he explained, Indonesian coffee production has not increased for 10 years, while there is an increase of 6-7% consumption in the country. He said If there is no increase in production, Indonesia will face difficultyin export. According to Sugandhi, productivity is still low due to the lack of rejuvenation of coffee plants that have been hundreds of years old. He said Indonesian productivity per hectare is only 700 kilograms, whereas Vietnam has produced 3 tons per hectare. He hopes, the government can support farmers to increase productivity through providing cheap credit and land.

“From last year, the government has begun to realize. Yesterday, we were invited by Indonesian Coordinating Ministry of Economic Affairs to make a roadmap to increase our coffee production through short-term productivity. Because the land is wide enough for its low productivity, how to improve its short term,” HutamaSugandhi said.

He further explained, for the short term, productivity can be increased through the rejuvenation of old seeds. If Indonesia can doubleproduction per hectare, it can beat Vietnam'sproduction. And for the long term, he suggested to expand coffee plantation. In 2017, the total amount of Indonesian coffee beans exports worth 1.5 billion US dollars and ready to use coffee worth 500 million US Dollars. HutamaSugandhi further said the most popular type of coffee is robusta, but export to USA is dominated by arabica coffee. In the last 3 years, refined coffee has increased dramatically from 150 million US Dollars to 400 US Dollars. He believes market expansion to Singapore, the Middle East and other countries will boost export of processed coffee. (VOI/Sekar/trans by Rezha/DP) 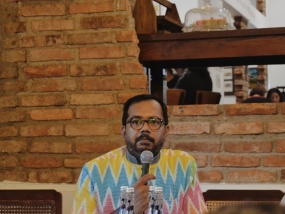 The Commission for Missing Persons and Victims of Violence (KontraS) launched the Asia Alliance Against Torture website which is an alliance of civil society organizations throughout Asia to advocate and campaign against torture. The launch of this website validates the work of the alliance against torture. This website is created in order to consolidate human rights movement against violence and to ensure a fair and honest legal movement and able to intervene the issue in other Asian countries.

“The website aims to consolidate the human rights movement against violence, ensure a fair and honest legal movement - and later intervenethe issue at a number of countries, or a number of rulers who allow torture to occur,” Director of Lokataru Law and Human Rights, HarisAzhar, said on a press conference after the launching of the Asia Alliance Against Torture (AAA) website at BakoelKoffieCikini, Central Jakarta, Tuesday, April 24th.

Haris also added that the website is a manifestation of growing awareness that thenumber of violent practices in various countries in Asia is increasing. This website was the result of a meeting of KontraS and several human rights organizations in Asian countries several years ago which tried to reduce violence in Asia. (VOI/Egi/trans by Rezha/DP) 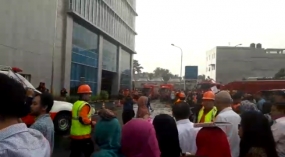 In commemorating Disaster Preparedness Day on April 26, the National Disaster Management Agency-BNPB conducts various activities. Head of BNPB, Willem Rampangilei explained, Disaster Preparedness Day is commemorated because Indonesia is one of disaster-prone countries. In a disaster evacuation rehearsal held at BNPB building, Tuesday, April 24, he said, 215 million people live in earthquake, flood, tsunami, volcano eruption and landslide prone areas. The number of catastrophic has increased from year to year. He noted there were 2,772 disasters in 2017. He also said that disaster and disaster management is a complex and multidimensional problem, then there must be collaboration between society, government and business world. He stressed the importance of community participation in disaster management. In managing disaster, BNPB is always based on the community.

“Disaster management efforts should be community-based. Well this is what we do. We should be able to build community participation. One, we always give socialization about the understanding that our country is prone to disaster, then he must understand the hazard around him, after he understands it when receiving an early warning how to respond,” said Willem Rampangilei.

Willem further explained, the community-based disaster response must be a national movement. On Monday, April 24, BNPB conducts a series of activities to commemorate Disaster Preparedness Day as an effort to build awareness and community participation in disaster management. Willem said, one could survive from disaster 34% because of individual capacity, 32% of families and 28% because of the people around him. Therefore, the society plays the most important role in disaster management. (VOI/SEKAR/DP)