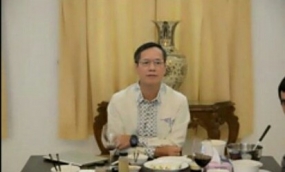 Together with ASEAN and the UN, Indonesia and Vietnam Combat COVID-19

Jakarta (VOI News) - This year, on December 30, 2020, Indonesia and Vietnam will celebrate their 65th year of diplomatic relations. So far, relations between the two countries have been well established. Since 2013 the two countries have established Strategic Partnerships with in-depth cooperation in all fields, including political and diplomatic dialogue, defense and security cooperation, economic cooperation, as well as tourism promotion, cultural exchanges, and people-to-people contact.

To commemorate the 65th diplomatic relations, the Vietnamese Embassy in Jakarta held an online media luncheon on Tuesday (22/12). This was one of a series of activities carried out by the Vietnamese Embassy in Jakarta to celebrate 65 years of diplomatic relations between the two countries. In his remarks, Vietnam Ambassador to Indonesia Pham Vinh Quang said that in response to the global COVID-19 outbreak, Vietnam and Indonesia in various fora, both in ASEAN and at the United Nations (UN), have participated in seeking cooperation to prevent and combat the pandemic.

“Vietnam as a chair of ASEAN, we have already had a statement, ASEAN statement, in March 2020. And after that, we have a serious plan of action. ASEAN to have the fund and later this year, you can follow the result of the Summit of ASEAN. Also in the international fora like the United Nations, Vietnam will also compose the United Nations resolution to combat COVID-19. So we together with Indonesia and other large countries will adopt this matter,” said Ambassador Quang.

In his remarks, Ambassador Pham Vinh Quang said that his country has an interest in working together with Indonesia in developing the COVID-19 vaccine. (VOI / AHM) 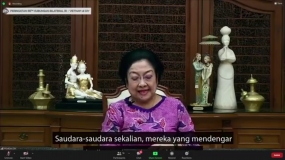 Megawati: Having the Same Aspiration, Friendship between Vietnam and Indonesia will be Eternal

VOI News - A week-long photo exhibition is being held at Yogyakarta’s public library Grhatama Pustaka and virtual format at Virtualexpo.jogjaprov.go.id to commemorate the 65 years of bilateral diplomatic relations between Indonesia and Vietnam. Speaking online at the opening ceremony of the event on Monday (08/12), Megawati Soekarnoputri shared her deep memories of Uncle Ho and her father, President Soekarno, during President Ho Chi Minh's visit to Indonesia in 1959, emphasizing the similarities in the exceptional qualities that are rare for both leaders. She also expressed her belief that the friendship between Vietnam and Indonesia will surely be eternal because both countries share the same aspirations for freedom, independence, and the next generations need to continue to preserve. MeanwhileGovernor of Yogyakarta Sri Sultan Hamengku Buwono X represented by Deputy GovernorKanjeng Gusti Pangeran Adipati Aryo Paku Alam X, in his virtual remarks, stressed relationship history between Indonesia and Vietnam will strengthen cooperation bilaterally, not only at the governmental level but also in the relations between the two peoples. He believed that the event would become an opportunity for the people of the two countries, especially youth, to deepen understanding of the long-standing friendship between the two countries. (AHM/VOI/Embassy of Vietnam) 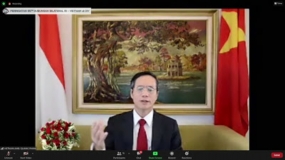 Commemorating the 65th Anniversary of Diplomatic Relations, Indonesia and Vietnam Holds a Photo Exhibition in Yogyakarta

VOI News - The Vietnamese Embassy in Jakarta in coordination with the Government of Yogyakarta held an opening ceremony of a week-long photo exhibition at Yogyakarta’s public library Grhatama Pustaka on 7 December 2020 and virtual format at Virtualexpo.jogjaprov.go.id. The event was virtually attended by the Vietnamese Ambassador to Indonesia Pham Vinh Quang and the fifth President of the Republic of Indonesia Megawati Soekarnoputri. The photo exhibition was officially opened by the Deputy Governor of YogyakartaKanjeng Gusti Pangeran Adipati Aryo Paku Alam X.Vietnamese Ambassador to Indonesia Pham Vinh Quang in his remarks generally reviewed 65 years of relationships between the two countries and the special friendship between President Ho Chi Minh and President Soekarno as the platform for bilateral relations. The Ambassador also introduced Vietnam's recent economic achievements, highly appreciated Yogyakarta's role and position in history, culture, education, economy, and believed that Yogyakarta would continue to develop and promote investment, trade, and tourism relations with localities of Vietnam. (Release of Embassy of Vietnam) 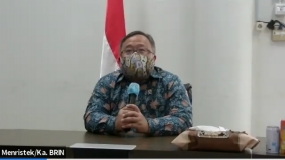 "So we really must have independence with vaccines and that's why we provide support to 6 teams working to produce COVID-19 vaccine seeds, with this Decree the institution or the team will get budget support, both a budget for research and later a budget for clinica testing, said Bambang Brodjonegoro.

Minister of Research and Technology Bambang Brodjonegoro further said that the 6 vaccine development teams would also get the equipment or materials needed in vaccine research, either carried out by each institution or at the National Vaccine Development Center at Komplek Puspitek (Research Center for Science and Technology) Serpong. .

Another support, Bambang Brodjonegoro continued, each team will be paired with the industry to carry out downstream and production. According to Bambang, this industry will be coordinated with Bio Farma and private companies to collaborate with the 6 teams developing the COVID-19 vaccine. The six teams or institutions formed to develop the Red and White vaccine are the Eijkman Institute for Molecular Biology, LIPI (Indonesian Institute of Sciences), Gadjah Mada University, University of Indonesia, Bandung Institute of Technology, and Airlangga University. (VOI / AHM)