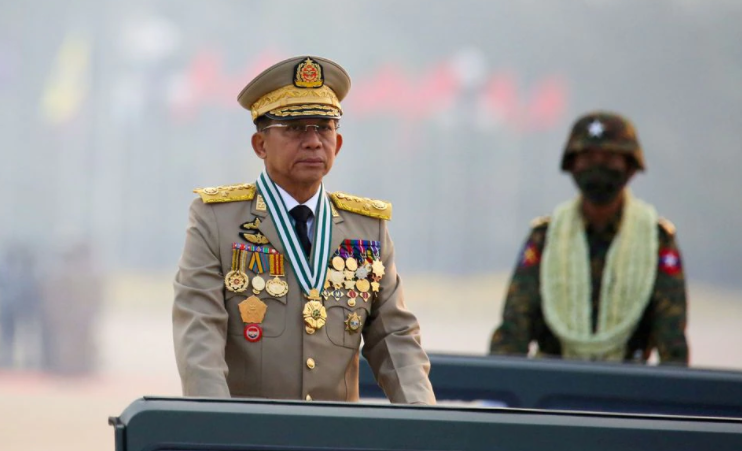 Members of a shadow government set up by opponents of Myanmar's coup condemned on Monday the country's military ruler for taking on the role of prime minister in a caretaker government and said the move was designed to try to win legitimacy.

Military ruler Min Aung Hlaing made the announcement in a speech on Sunday, six months after the army seized power by overthrowing an elected government led by Aung San Suu Kyi.

The "Provisional Government" replaces the State Administration Council (SAC) chaired by Min Aung Hlaing that has run Myanmar since the coup.

"The transition from a military council to a caretaker government is a reflection of the fact that they are preparing for an international diplomatic battle, trying to prove the fact that they are a government," said Aung Myo Min, minister for human rights in the National Unity Government (NUG), which was formed in April by various groups including members of Suu Kyi's party and pro-democracy activists.

"However, there is no denying the fact that the military is not elected by the people," Aung Myo Min said in a post on Facebook.

The creation of the caretaker government was done "in order to perform the country’s duties fast, easily and effectively", a news reader on state Myawaddy television said on Sunday.

In his speech, Min Aung Hlaing repeated a pledge to hold elections by 2023 and said his administration was ready to work with a regional envoy on Myanmar. read more

The Association of Southeast Asian Nations (ASEAN) has been spearheading diplomatic efforts and ASEAN ministers met on Monday to try to appoint an envoy to help end violence and promote dialogue to end the crisis. read more

The Assistance Association for Political Prisoners activist group has accused security forces of killing at least 940 people in suppressing dissent since the coup. The military has said the number of protesters killed is far lower and members of the armed forces have also died in violence, while calling the NUG a terrorist group.

Lahpai Maw Htun Aung, the NUG's deputy minister of electricity and energy, said in a social media post that after six months of violence the junta was trying to win international recognition and legitimacy.

"Putting a sheep's skin on a wolf doesn’t make the wolf less of a wolf," he said. (Reuters)