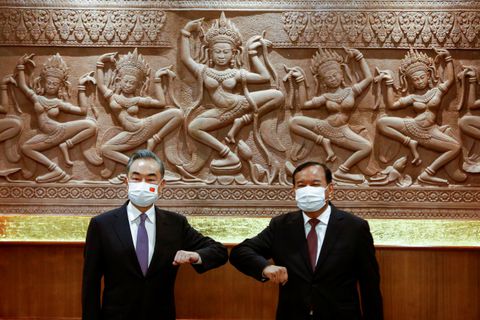 State Councillor Wang flew in from Vietnam on a week-long tour that will also take in Singapore and South Korea, two weeks after U.S. Vice President Kamala Harris visited the region. read more

Pa Chanroeun, an analyst at the Cambodian Institute for Democracy think tank, said China was keen to build on its relations with Cambodia, which will chair the 10-member Association of Southeast Asian Nations (ASEAN) next year.

"I think it is a campaign to further strengthen and expand China's influence in Southeast Asia," Pa Chanroeun said.

Cambodia sits on the Gulf of Thailand which leads into the contested waters of the South China Sea.

China's Wang Yi officially also handed over a new national stadium, built with a $150 million grant from Beijing, to Cambodian Prime Minister Hun Sen at a ceremony on Sunday.

Hun Sen said that without Beijing, Cambodia would not be able to upgrade infrastructure or vaccinate millions of people against COVID-19.

"If I don't rely on China, who do I rely on?" Hun Sen asked, citing China's role in helping build roads, irrigation systems and power networks.

The agreements on aid and vaccines would be signed later on Sunday, Cambodian Foreign Minister Prak Sokhonn said.

Harris did not visit Phnom Penh on her tour. But In June, Deputy U.S. Secretary of State Wendy Sherman - the most senior U.S. official to visit Cambodia in years - expressed concern about China's presence there and urged its leaders to follow a "balanced" policy. (Reuters)