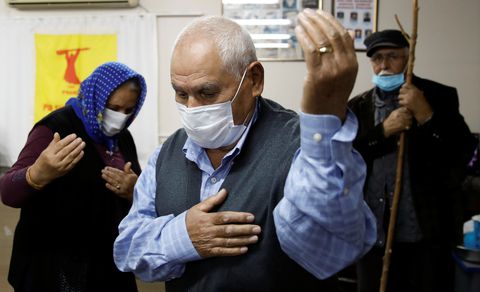 Ali Erdem leads his Alevi community each week in a ceremony filled with symbolic ritual, music and dance, performing in a place of worship that has been thrust into political debate ahead of Turkish elections due by 2023.

As a musician plays the lute-like saz and worshippers in red sashes dance in a circle to experience union with God, Erdem recites prayers and tales of persecution that Alevis, Turkey's largest religious minority, have faced in Turkish history.

Erdogan faces an uphill battle to win over a minority - 15-20% of Turkey's 84 million population - that is mostly left of centre and suspicious of the Islamist-rooted AKP's objectives after past efforts to address Alevi concerns collapsed.

Alevi groups have demanded the official recognition of cemevis, the implementation of court rulings on the issue and an end to what they say is assimilation through compulsory religious education and discrimination in public life.

"The AK Party government is trying to create its own Alevis," Erdem said before the cemevi ceremony in Istanbul.

"We were repressed for hundreds of years but never bowed down to anyone," he said, recounting a series of historical massacres of Alevis.

Alevis draw on Shi'ite Muslim, Sufi and Anatolian folk traditions, practising rituals which can put them at odds with Turkey's Sunni Muslim majority. They are associated with Shi'ite Islam because of their veneration for Ali, whom Shi'ites believe was the Prophet Mohammad's rightful successor.

In 1993, 37 people, mostly Alevi intellectuals, were killed in a hotel fire in Sivas province that occurred during a Sunni Islamist protest against the presence at an Alevi festival of a translator of Salman Rushdie's "The Satanic Verses".

A decade ago, Erdogan launched an undertaking to help the Alevis - only for it to collapse amid the turmoil caused by anti-government unrest focused on Istanbul's Gezi Park in 2013.

But, amid signs of diminishing AKP popularity, the issue re-emerged at a recent cabinet meeting, after which Erdogan pledged to work harder to enable all Turks "to breathe easily".

Ali Yurumez, an Alevi association representative at another Istanbul cemevi, said officials who visited the pre-fabricated building had offered to reconstruct it.

But he rejected this, saying such offers of material help suggested the government was not keen on making legal changes.

"They were thinking 'can we create a division among Alevis', with an election ahead of us. But I don't think Alevis will play along with that game," he said, sitting below photographs of the victims of the Sivas blaze.

He said Alevis had recently been targeted with expressions of hate, citing a Sunni theologian's declaration that an Alevi whose faith is contrary to Islam could not marry a Sunni woman.

However, Turkish officials said there was a real will for change in the latest overture to the Alevis.

"The president wants this issue resolved," a senior AKP official told Reuters. "The status of place of worship, which has long been demanded, may be given this time."

A senior Turkish official acknowledged the potential electoral benefit of such moves on minority rights, but denied that this was the motive for the work regarding Alevis.

"There may be an impact on votes but this work was launched years ago and was interrupted by the Gezi (Park protests)," he said. "It is unjust to see this as preparation for an election."

In 2016, the European Court of Human Rights ruled Alevis were denied the right to freedom of religion and faced discrimination. Turkey's appeals court ruled in 2018 that cemevis were places of worship.

But the government has not acted on these rulings and there appeared to be diverging government views on cemevis' status. The senior AKP official said they might be designated as cultural centres, exempting them from rent and utility payments.

Such a move would fall short of Alevi demands for place of worship status, even if there were financial benefits for cemevis that rely on private donations to finance the practice of the Alevi faith in the absence of state support.

By contrast, Turkey's nearly 90,000 mosques and their staff are financed by the Diyanet, or Religious Affairs Directorate, with a budget approaching $2 billion. But Alevis repeatedly stressed financial help was not what they sought.

Erdem himself works as a minibus driver ferrying factory workers around before making his way to the cemevi, but rejected the idea of the state paying a wage to faith leaders like him.

"I would never want a salary. We would never become the men of the state or the AKP." (reuters)