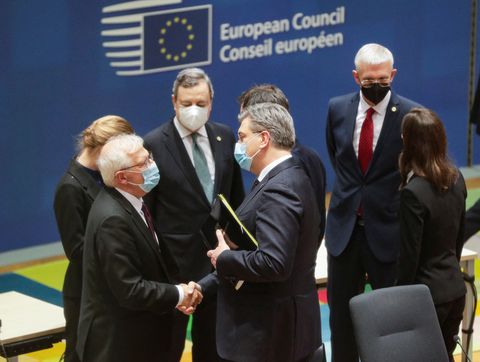 EU states agreed to freeze any European assets of Russian President Vladimir Putin and his foreign minister on Friday, as Ukraine's leader pleaded for faster and more forceful sanctions to punish Russia's invasion of his country.

The move against Putin and his top diplomat, Sergei Lavrov, came as envoys of the EU's 27 member states agreed on a new wave of measures - their second this week - to hit Russia's elite and thwart operations of 70% of the country's banking system.

"They are responsible for the deaths of innocent people in Ukraine, and for trampling on the international system. We, as Europeans, do not accept that."

A senior EU diplomat said that although the Russian leaders may not have extensive assets in Europe, the move against them personally was "a politically important signal".

Borrell said the latest round of sanctions could be followed by a third, though this would only come if it was needed.

"You still can stop this aggression. You have to act swiftly," he said, adding that banning Russians from entering the EU, cutting Moscow off from the SWIFT global interbank payments system and an oil embargo should all be on the table.

The EU ministers' agreement on comprehensive sanctions means the bloc has joined the United States and other Western nations in curbing Russia's access to key technologies and financing.

The EU's measures will also target Russian elites and make it tougher for diplomats to travel, but the bloc opted not to curb Russian energy imports, or - after objections from Germany and Italy, among others - to cut Russia off from SWIFT.

French Finance Minister Bruno Le Maire, hosting a meeting of EU counterparts in Paris to discuss the economic impact, said removing Russia from SWIFT remained an option, but only as a "financial nuclear weapon" of last resort. read more

He said some EU countries - but not France - have reservations about such a step, and the European Central Bank was expected to deliver an analysis "in the coming hours" on the consequences if it was taken.

Baerbock said the SWIFT option risked hurting individuals, such as those trying to send money to relatives in Russia, "whereas those people who are responsible for the bloodshed will still be able to do their bank business". (reuters)