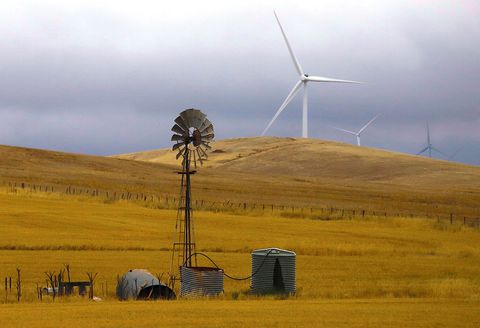 Australia's biggest building materials manufacturers are cutting back operations, hiking prices and considering moving production offshore to manage a spike in power and gas bills, adding to pressure on the government to resolve the country's energy crisis.

The CEOs of Brickworks Ltd (BKW.AX), the country's largest brickmaker, and Boral Ltd (BLD.AX), the top maker of most other construction materials, flagged the changes even as Australia's new Labor government scrambles to try to beef up power supplies and bring down electricity prices.

The price jump has been exacerbated by record high global coal and gas prices, stoked by sanctions on Russia.

That has left Australia's A$100 billion ($70 billion) manufacturing sector, a major power and gas consumer, exposed to soaring costs, especially those whose cheaper, long-term energy contracts are expiring.

Brickworks, for example, has gas contracts with Santos Ltd (STO.AX) averaging A$10 per gigajoule, locked in for two years, compared to the current government-mandated price cap of A$40.

"If we had to pay, when our contract rolled over, (the current spot price), we would no doubt be shutting plants down and moving production offshore," said Lindsay Partridge, managing director of Brickworks.

Brickworks pays just $3 per gigajoule for gas in the United States, where it owns Pennsylvania-based brickmaker Glen-Gery Corp.

"If we rolled over and you had to pay A$40, and I could buy gas in the U.S. for $3, then it's a pretty easy equation to work out," added Partridge.

The United States generates just one-sixth of Brickworks' earnings from building materials, but the company could save money by shipping product back to Australia, he said.

Boral, which downgraded its annual profit forecast in May partly due to energy costs, told Reuters it has cut back on operations due to "the speed and magnitude of the change in energy prices".

"We have been forced to temporarily curtail some areas of our operations and unfortunately have been left with no other option than to pass increases onto customers directly," said Chief Executive Officer Zlatko Todorcevski in an email to Reuters, without specifying the size or products affected by the cuts. "We have also had to accelerate plans to review our overheads as we offset these inflationary challenges."

The Business Council of Co-Operatives and Mutuals said this month manufacturers were choosing between shutting "uneconomic operations" and passing higher costs to consumers as energy bills jumped more than 600% in a few months.

Incitec Pivot (IPL.AX), Australia's top fertiliser maker, has said it would close its Brisbane plant at the end of 2022 because it was unable to line up an affordable gas contract.

The latest crisis has highlighted the need for more gas supply in the domestic market, for a country which is the world's biggest exporter of liquefied natural gas (LNG).

Manufacturers have long clamoured for gas export controls or a reservation of gas for the domestic market. Gas prices have more than tripled in price since 2014, when Australia started exporting LNG from the east coast.

In Western Australia, where 15% of gas is reserved for local consumption, domestic prices are a fraction of the capped east coast price.

"There's certainly a strong call from many quarters for something to be done and a lot of people point to gas export controls," said Tennant Reed, energy policy director at the Australian Industry Group.

Australia's new resources minister, Madeleine King, has said all options are on the table for dealing with gas supply challenges.

Successive governments have previously opposed a gas reservation on the east coast, under pressure from gas producers which say the structure would deter further investment.

"It was something I raised 10-12 years ago with the previous Labor government about allowing all the gas to be exported, and connecting up the east coast of Australia into international markets," said Partridge, the Brickworks managing director.

"Now it's all come home to roost." (Reuters)