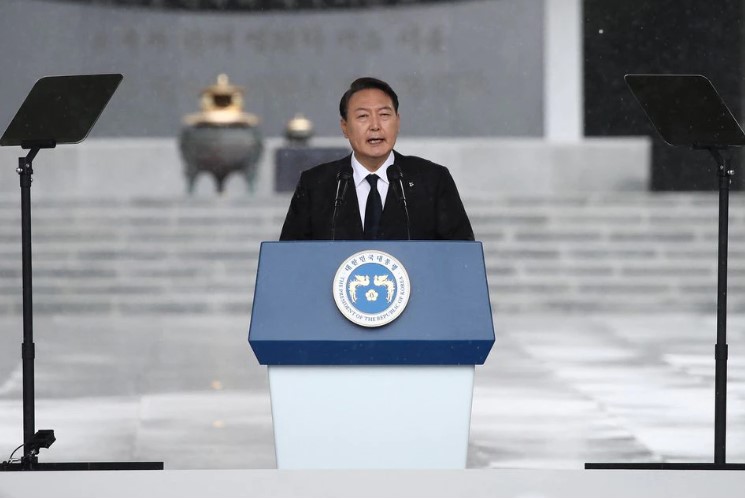 South Korea must overcome historical disputes with Japan and achieve peace with North Korea as key steps towards bolstering the stability and security of the North Asian region, South Korean President Yoon Suk-yeol said on Monday.

Speaking at a ceremony to mark the 1945 end of Japan's colonial rule of the Korean peninsula, Yoon said Tokyo had become a partner in tackling threats to global freedom, and urged both nations to overcome disputes dating to those days.

"When Korea-Japan relations move towards a common future and when the mission of our times align, based on our shared universal values, it will also help us solve the historical problems," he said in remarks prepared for delivery.

Relations between the U.S. allies have been strained over disputes such as Korean accusations that Japan forced women to work in wartime brothels for its military, and the use of forced labour, among other abuses.

Yoon, a conservative who took office in May, has vowed to improve ties with Japan.

He called for extensive co-operation in areas from economics and security to social and cultural exchanges, to help contribute to international peace and prosperity.

Yoon repeated a promise to provide North Korea with wide-ranging aid if Pyongyang stopped development of its nuclear program and embarked on a "genuine and substantive" process of eliminating such weapons.

"We will implement a large-scale food program; provide assistance for power generation, transmission and distribution infrastructure; and carry out projects to modernise ports and airports for international trade," Yoon said.

The South is also ready to help boost its neighbours' farm productivity, modernise hospitals and medical facilities, and take steps for international investment and financial support, he added in the English translation of his remarks.

North Korea has blamed the South for causing its COVID-19 outbreak - which Seoul denies - and appears to be preparing to test a nuclear weapon for the first time since 2017, amid stalled denuclearisation talks.

The two nations technically remain at war, since their 1950-1953 conflict ended in a truce, rather than a peace treaty. (Reuters)