Indonesia, US committed to enhancing cooperation through IPEF 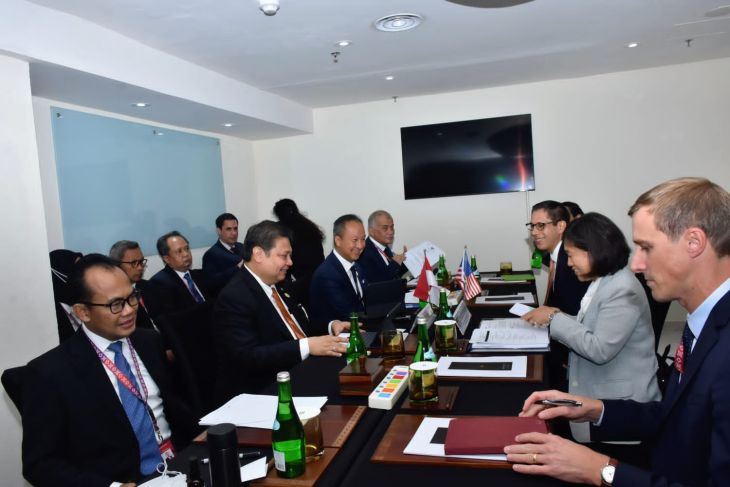 Indonesia and the United States are encouraging the promotion of economic, trade and investment cooperation between the two countries through the Indo-Pacific Economic Framework (IPEF)."As a follow up to the agreement reached at the IPEF Ministerial Meeting in Los Angeles some time ago, the Indonesian government expresses its preparedness and affirms its commitment to follow all IPEF pillars," Coordinating Minister for Economic Affairs Airlangga Hartarto said here, on Thursday.He made his remarks following a bilateral meeting with US Trade Representative, Ambassador Katherine Tai, representing the US government in the Trade, Investment and Industry Ministers Meeting, held as part of a series of meetings during Indonesia's G20 Presidency.The IPEF cooperation framework can be a correct response to the current global condition and dynamic, which necessitates all countries to emphasise closer cooperation in creating balance, prosperity and just development, particularly in the Indo-Pacific region, he said.Ambassador Tai positively welcomed the statement, while expressing gratitude and much appreciation for the serious and transparent involvement of the Indonesian government in encouraging concrete results of cooperation within the IPEF framework.Through the cooperation framework, she expressed the hope that all countries in the Indo-Pacific region could grow together and become stronger. Looking ahead, IPEF will place emphasis on broad-based and tough economic connectivity and integrity in the Indo-Pacific region.At the meeting, both sides also looked into the possibility of cooperation in the industrial sector, particularly the semiconductor industry, and discussed developments in the settlement of trade disputes between the two countries in the World Trade Organization (WTO) (DS 478).The meeting also discussed the significance of the two countries in encouraging bilateral cooperation schemes and reaching an agreement allowing Indonesia to constantly receive the generalized system of preferences (GSP) from the US.Trade between Indonesia and the US reached US$37.04 billion in 2021, compared to US$27.20 billion one year earlier.In the year ended on July 31, 2022, the trade value reached US$23.95 billion, up 21.94 percent compared to the same period in 2020 when it was recorded at US$19.64 billion.At the meeting, Hartarto further highlighted the significance of US support for the G20 Summit scheduled in Bali in November, 2022, in order to achieve consensus in the Leaders' Declaration.Ambassador Tai said the G20 consensus is very important, although the G20 Summit will be held during the difficult time due to the impact of the global geopolitical dynamics.Both Hartarto and Tai agreed that the G20 will focus more on funding solutions to the global economic and financial problems, rather than prioritizing geopolitical issues. (Antaranews)